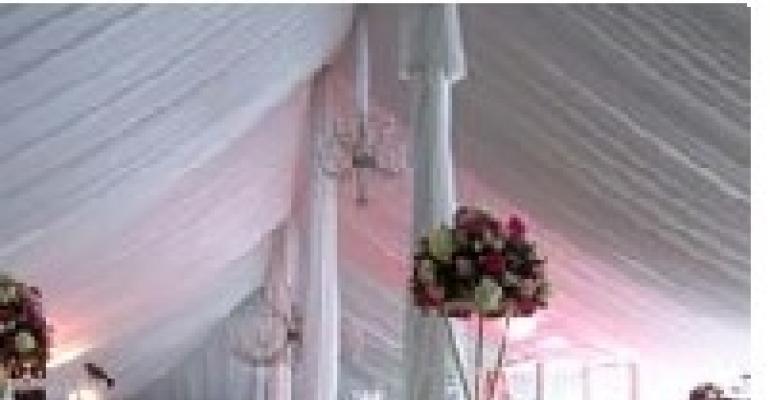 Three days out from a 275-guest wedding in August, Tara Cutler dealt with an unusual twist to the wedding's well-laid plans. Initially, the special events consultant for the special events division of Mishawaka, Ind.-based Burns Rent-Alls Inc. felt pleased with her team's setup efforts. “We were actually ahead of schedule when we left the job site for the day,” Cutler says. “They were installing the last chandelier when I left.”

But Mother Nature had a few tricks up her sleeve: A F3 tornado sent winds between 158 and 206 mph raking over the reception tent erected on a lawn by Lake Maxinkuckee in Culver, Ind.

“I received a phone call from the gentleman installing the chandeliers,” Cutler says. “He called to let us know that the tents were down along with everything underneath — tables, chairs, the silk liner and the hand-strung chandeliers.”

With only two days until the bride and groom said “I do,” the special event team set about re-creating the reception site. But they needed to get there first: “Our crew had to move trees out of the streets with a Bobcat to get to the job,” Cutler says.

The Burns emergency crew arrived in Culver at 1:30 a.m. While Cutler notes that the broken tent poles, tables and chairs were easy to replace, the tent's damaged silk liners were not because Burns is the only vendor in the area with the product. While cleaning up the stained, shredded linen, the crew “found branches from trees and pieces of crystal from the chandeliers in the liner as we were loading the washer,” Cutler says.

The laundered and patched liners were hung at night in the light of a truck's high beams. But daylight revealed more surprises. “The day before the event, we got to the job site to find a few more tears we had missed and at least four large stains,” Cutler says. So crew leader Chris Schriefer climbed on a lift and pleated the liner to hide the ruined parts. New chandeliers, shipped from Chicago, were rehung and draped with crystals.

Chandeliers hand-strung with crystals, pink LED lights and the hastily repaired silk tent liner decorated the interior of the tent for the romantic, pink-tinted reception. “Honestly, I believe we handled the situation as well as anyone could have,” Cutler says. The reconstructed tent impressed other event experts. The decor team and caterer “could not believe that there was a tornado,” Cutler says. “If they hadn't seen all the trees down or heard it on the news, they would have never known.”