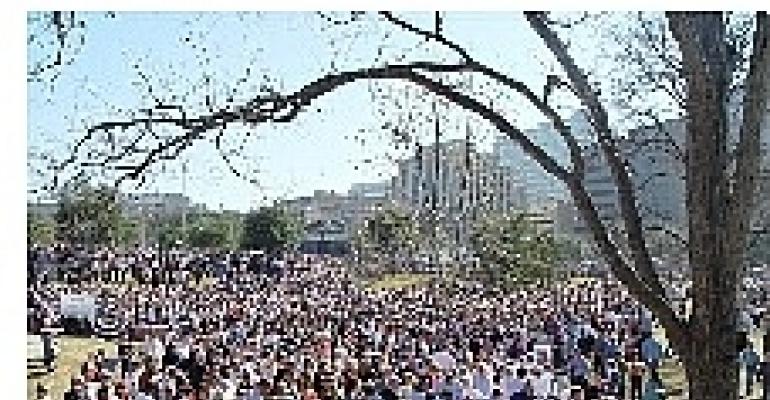 America's midterm elections earlier this month gave the Democratic party plenty to celebrate, winning them control of Congress for the first time in 12 years. And that means the event business will be busy, too.

For Washington-based Capitol Catering, "It was wild last week on [Capitol] Hill," company head Sara McGregor tells Special Events Magazine. "We did about half a dozen parties connected to the New Member Orientation week. One lunch went from 60 [guests] to 115 overnight literally because of the stunning election results."

"Political inaugurals are always good business in Washington," says Raz Nielsen, director of sales for Washington-based Occasions Caterers. "A good rule of thumb for when they are bigger and more exciting is when the minority becomes the majority--Democrat or Republican doesn’t really matter. So for a catering business perspective in Washington, you should always vote for the party in the minority."

For the upcoming inaugurals, "We have events ranging from 20 to over 1,000 [guests], and there is great excitement among the Democrats for finally regaining the Congress," Nielsen says. "So the events will be more festive and celebratory than they have been for over a decade, but there is no theme other than 'victory is finally here.'"

DON'T FENCE ME OUT

Austin, Texas-based Marquee Rents will be helping Texas Governor Rick Perry celebrate his reelection in January with a party for Perry and "14,000 of his closest friends," says Marquee head Damon Holditch, CSEP, CERP. Texas inaugurals have traditionally included barbecues on the steps of the capitol in Austin. But the events broadened in scope with the 1995 inaugural, which celebrated the victory of George W. Bush as governor over incumbent Ann Richards. "And the Republicans have been celebrating ever since," Holditch says.

As it has for the three inaugurals leading up to the 2007 event, Marquee will provide tenting, flooring, tables, chairs and fencing, among other equipment. "It's the single biggest event we do," Holditch says. Renowned Dallas caterer Eddie Deen cooks all night before event day, preparing food for the 35 double-sided buffets that serve members of the public, who pay $5 a ticket to attend. Once the fenced-off area is open for the hordes of guests to hit the buffets, they "look like gazelles coming over the hill," Holditch says. "They hit those lines and spread like a river flowing out there."

Los Angeles-based Ambrosia Productions has just inked a deal to produce the Jan. 5 inaugural events for reelected California governor Arnold Schwarzenegger, company head Carl Bendix tells Special Events. Following the televised swearing-in will be a tented luncheon for 400 on the steps of the state capitol in Sacramento, then a black-tie "California Dreaming" gala for 1,500 guests at the city's convention center featuring cuisine from noteworthy restaurants throughout the state. Grammy-winning music producer/songwriter David Foster will handle entertainment.

Even though the parties tied to the midterm elections can be profitable, it is the events in presidential election years that are the big bashes. For presidential inaugurations--the next one coming in January 2009--"I can bring in more revenue in one day than I do in a quarter," notes Peter Grazzini, head of Washington-based Perfect Settings.

Parties for politicians bring their own sets of rules. "The Republicans always spend more and have more formal events, but the Democrats always have the parties that are more fun though lower budget," says Jack Luft, head of Chicago-based Hall's Rental.

The market for Tarzana, Calif.-based caterer Someone's in the Kitchen includes Hollywood's heavyweights, who are "weighted heavily with Democrats," notes company president Joann Roth-Oseary. Their parties "tend to be 'short and sweet, meet and greet, photo-op and give-me-your-money' deals."

Yet no matter how much they differ on policy, both parties often play the same game.

"A good rule of thumb for the political process is to always serve beef," Nielsen says. "Democrat or Republican, they always come together on the issue of menu. It’s never chicken. It’s always beef."

And as voters know, politicians can forget the promises they made while campaigning. "One of the biggest issues with campaign events is collecting on your invoices," Luft notes. "No matter how well-respected a candidate may be, the day after his election his local office is usually disbanded, and if you have not been paid by then, it can be very hard to collect."

Lee Gregory, executive vice president and director of sales and marketing for McCall Catering in San Francisco, agrees. "Congrats to any caterer who books a good gig," she says. "Hopefully the taxpayers don't foot the bill."

Which political party makes a better client? Bendix offers a politic response: "Everything we do is bipartisan," he says.