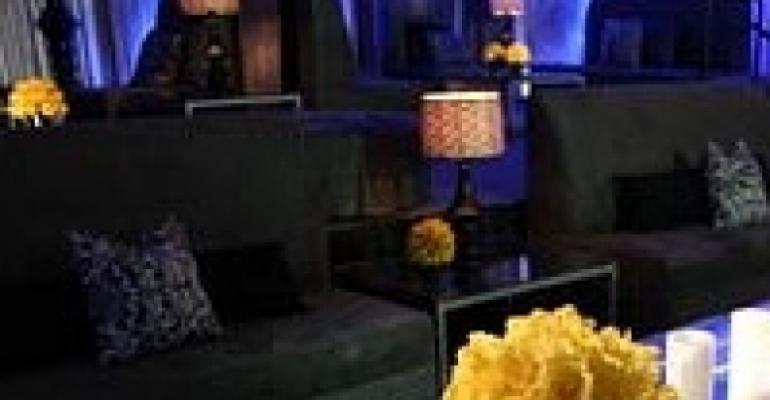 When asked to design a “never before seen” hip hop-themed bar mitzvah in a “seen by everyone” hotel ballroom, Los Angeles-based AOO Events looked to Las Vegas for inspiration, specifically rapper Jay-Z's ultra-cool 40/40 Club. “The client wanted something that no one had seen before at a property [the Townsend Hotel in Birmingham, Mich.] that everyone in town had used for their upscale family functions,” says AOO Events owner David Merrell. With that in mind, Merrell and his team set about creating a more age-appropriate version — “AK's Hip Hop Lounge and 13/13 Club.”

The designers, working with Detroit-based event and entertainment producer Star Trax, began the transformation from the floor up-literally. The first thing to go: the tiled floor of the ballroom's foyer, which was covered in wall-to-wall neutral carpeting. The foyer became the central lounge area, set with contemporary gray suede furniture accented with black and white throw pillows and lamps. Bright yellow floral arrangements added a jolt of color. A focal point on one wall featured “AK's Hip Hop Time Line,” which cleverly integrated photos of family events with milestones in rap music. Gaming stations and digital photo booths kept kids entertained, while the adults enjoyed cocktails and appetizers at the sophisticated “Corner Bar.”

When the time came to announce the bar mitzvah boy, guests entered the ballroom by walking through a hydrogen wall — a thin, lighter-than-air wall of hydrogen fog — projected with the custom “13/13 Club” logo and a photo of the bar mitzvah boy. “The impact — the fact that you can walk through any image — is priceless,” Merrell says.

The lounge theme continued inside the ballroom, where walls were draped entirely in white velvet with floor-to-ceiling black fringe overlays. Guests were greeted by three emcees and two dancers from MTV, who got the kids moving on the solid black, high-gloss dance floor. Since video was a top priority for the client, the team created various video platforms, including a wall consisting of a dozen 50-inch plasma screens projecting a constant stream of images and videos.

“The clients asked for a complete makeover with decor and wild entertainment,” Merrell says. “I think we delivered.”