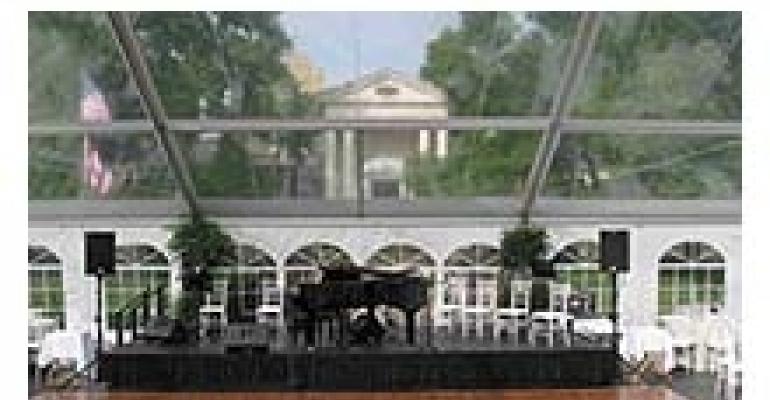 WHEN BOARD MEMBERS from the Taft Museum of Art in Cincinnati contacted David Murphy to design an event area for the May grand reopening of the museum following a $22 million renovation, he soon discovered that adequate space was priceless. With no event areas in the building large enough to accommodate the 450 VIP guests, the CEO of Cincinnati-based Camargo Rental faced a big task: “creating an elegant environment that would appeal to the black-tie nature of the event and would put it on par commensurate with an event held within the museum itself,” he explains.

To combat the space issue, Murphy proposed erecting a cocktail tent and main dining tent outside the building. However, because the museum grounds were not large enough to hold all the tenting, the main tent structure would have to spill over onto public sidewalks, streets and part of a public park located in front of the museum. As a result, this proposal posed permit problems aplenty. “Permits were difficult because we touched so many different departments,” he explains. “When you tell people you want to cut down a parking meter or lamppost, it freaks out half the city.” Lengthy meetings with city officials, including members of the police, parks, traffic and engineering, and public safety departments, and an assurance that everything that would be returned to normal post-event, won the go-ahead for the project.

With permits in hand, Murphy and his team set to work erecting the cocktail tent in the museum's courtyard and constructing a single-level, 10,000-square-foot floor for the main dining tent on the edge of the museum grounds, which was connected to the building's main entrance by 240 feet of covered walkways. But even though the permit problem was resolved, no one could regulate the weather: Just days before the event, the temperature went from the low 70s (Fahrenheit) to 90-degree-plus heat, requiring a last-minute scramble to air-condition the tented spaces.

In spite of these challenges, the gala was picture-perfect, with attendees enjoying pre-dinner cocktails, a tour of the new museum spaces and an elegant dinner. The highlight for guests was the sight of the museum's façade through the clear-top dining tent, which gave them an up-close view of the building that they had donated so much money to, Murphy notes. “The fact that the museum was the backdrop during the dinner was just huge for the guests.”