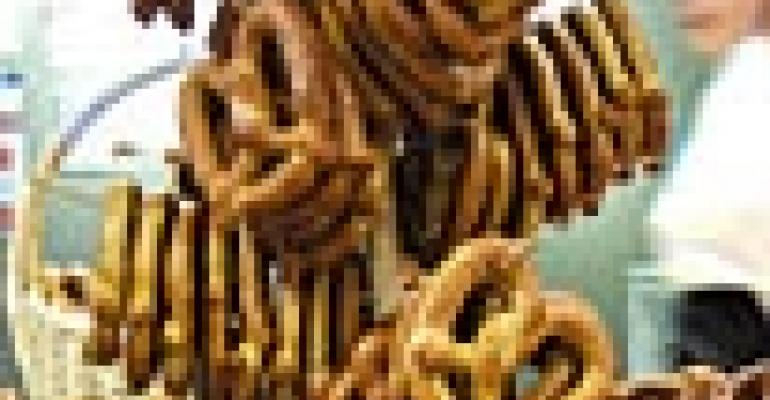 MENUS FOR BAR and bat mitzvahs pose a continuing challenge for caterers: how to please the palates of everyone at the celebrations, especially when the head count can approach 400 guests. Whether it's a kids-only cocktail room, a bountiful buffet or a gift bag filled with food, dual menus and service styles keep both children and grown-ups happy.

He says that a popular trend at the hotel is to create a separate room within the main ballroom for the children, setting up the kids' food cocktail-style and furnishing the space with couches. “There's no formal seating for the children at all,” he notes, adding, “The food is nearly always buffet-style, because to try to take an order from the kids when they're running around is almost impossible, and asking them to sit down is tantamount to stopping their party.” The younger set can choose from easy-to-eat, kid-friendly fare such as mini hot dogs, hamburgers, onion rings and pizza bagels, or a taco bar with classic fixings. For dessert, an ice-cream sundae bar offering a choice of chocolate, vanilla and strawberry ice cream and toppings such as Butterfinger and Oreo bits, hot fudge sauce and whipped cream is always a hit. And while he doesn't usually design menu items around a theme, Thornton says that for a baseball- or football-themed party, he may incorporate popcorn and cotton candy machines into the festivities.

While the kids are happy to eat on the run, adults are almost always served a seated, plated meal, Thornton says. Popular items include a mirrored display of lox, whitefish, kippered salmon, pickled herring and gefilte fish; a salad of baby Bibb lettuce with fresh herb/champagne vinaigrette; and entree choices such as filet of salmon or sliced Chateaubriand with bordelaise sauce. He also notes that as far as the adults are concerned, “The martini bar is the biggest thing,” and sushi bars are still very popular for the grown-up crowd.

Sharon Firestone, co-owner of Caterers York in Toronto, says that luncheons and dinners are equally popular for bar and bat mitzvahs. However, she notes that many of her clients choose just one menu for luncheons — usually a buffet that features items for both adults and children.

If the menu items chosen are not something that young people will enjoy — for example, poached salmon or tuna niçoise — then “we suggest a different buffet for the preteens, usually with Caesar salad, pasta, submarine sandwiches and an ice-cream bar for dessert,” Firestone says. One recent dinner party featured a separate children's menu of Yukon Gold french fries — served in paper cones — and pizza puffs for hors d'oeuvre; a buffet of egg rolls and wontons with plum sauce, sweet-and-sour chicken balls, stir-fried vegetables and fried rice; and a “Coke-tail bar” serving sodas, virgin coladas and Shirley Temples.

Firestone notes that her lunchtime mitzvahs are “not theme-oriented [because] they are during the Sabbath, and we have to follow many rules and restrictions.” At her largest venue, a local synagogue, the menus are also completely kosher. However, she says, evening parties usually have a theme. For one evening bar mitzvah, her company designed a menu that tied into the “summer camp evening” theme, with both adults and children enjoying items served by wait staff wearing T-shirts and khakis. Adults selected from steak filet with mushroom sauce or barbecue chicken, while children chose beef, chicken or veggie burgers. Dessert included s'mores, Popsicles and cookies served from a cart, and candy from the “camp” tuck-shop.

The dual menu trend also remains popular at Kansas City, Mo.-based The Catering Company, says president and owner Lon Lane. The menus for adults vary from “traditional to very upscale,” he says, and even take into account current fads such as the Atkins diet. Lane says that for adults, he is serving a lot of lamb, sea bass and beef tenderloin dishes, as well as Indian River soup — a tomato-based soup laced with vermouth and orange that is popular in the Midwest.

Meanwhile, children's menus are “very kid-friendly, fun and generally very basic,” Lane says. He notes the difficulty in feeding children at the celebrations. “It's always hard to plan things for kids when [someone is] spending money, and the kids aren't really eating,” he says. One solution has been to create what he calls a “handle bag” — a paper bag lined with brightly colored tissue paper and filled with kid favorites such as mini pizzas, turkey sandwiches, chips, and veggies and dip, which the children can eat whenever they're ready. The bags can act as a centerpiece as well as the main course, Lane says, noting, “It saves money for the client as well.”

In his area, Lane says he is seeing a greater focus on the significance of the celebration. “It's all about the child, family and friends celebrating the true meaning of the milestone,” he observes. As a result, “There seems to be less opulence, and more money spent on really great food and keeping focus on the true religious implication of the day.”