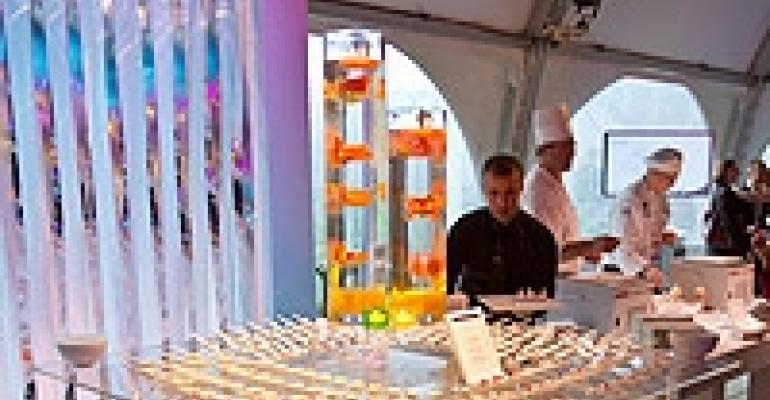 Creating a first-ever, high-end event can be daunting enough. Add a guest list comprising 500 foodies and top foodservice professionals who have seen, made and eaten it all, and the stress level increases. And finally, make it the go-to event during a week packed with go-to events. No pressure there …

But working under pressure is an event industry standard, and for Kathy Miller, head of Chicago-based Total Event Resources, turning up the heat meant turning the National Restaurant Association's annual sit-down dinner gala on its head. The result: This year's event, called “Destination: Celebration,” combined a trendy reception, an awards ceremony and a Kenny Loggins concert, all atop the Harris Theater's Rooftop Terrace in Chicago's Millennium Park.

“We had to design and execute a well-timed, cohesive and exciting experience that brought together three very different elements at one time and in one space,” Miller says. This meant elements such as the stage, sizeable production areas (backstage and in-house), large AV screens and LED floor monitors, multiple bars (including one 40-foot bar), a big kitchen, coat check, buffets, tables, seating and reception all had to be brought in and set up within the tent.

Great food aside, the main focus of the evening was a much-anticipated, first-time awards program honoring innovative industry operators. In addition to IMAG screens flanking the main stage, plasma screens placed around the buffet stations acted as scrolling menus during dinner, then switched to graphics supporting the main-stage awards program.

After the awards program, headliner Loggins took the stage to cap off the night, often coming out into the audience for a more personal performance.