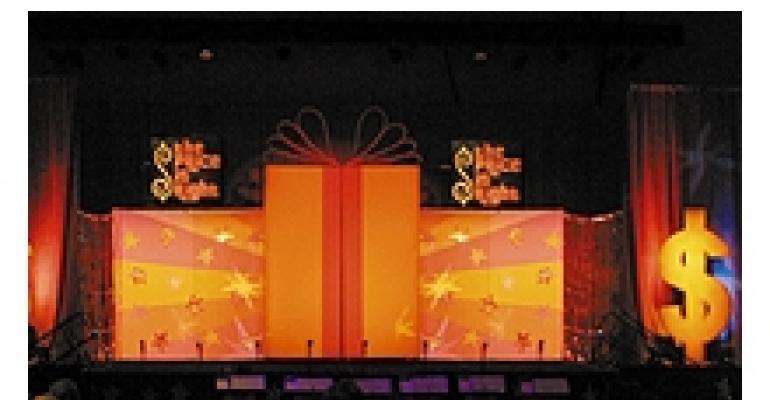 THE Grammys, the Emmys, the Oscars: Three-hour-plus awards shows have become the norm, not to mention a running joke among hosts. But when Monroe, La.-based marketing and sales organization The United Group wanted to cut the three-hour running time of its annual awards show in half, Long Beach, Calif.-based event producer Bravo Productions had to not only shorten the show, but also stage an event that suitably honored award winners and “involve the entire audience on an interactive level,” notes Bravo partner Greg Jenkins. The time-saving, boredom-banishing solution: a reenactment of long-running television game show “The Price is Right,” complete with host “Bob Barker,” glamorous spokesmodels and prizes. The format was designed to promote guest participation and also let also-rans walk away as winners.

For the interactive event — the grand finale of United Group's April conference at the Gaylord Palms Resort & Conference Center in Kissimmee, Fla. — the Bravo team re-created the set of the iconic game show. Following the opening entertainment number, lucky guests were invited to “come on down” to the stage to play classic “The Price is Right” games and win prizes. Keeping the level of excitement high was the fact that contestants were chosen at random from the 600 ceremony attendees. “We chose [them] not knowing whether they were a spouse, nominee, business partner, etc.,” Jenkins explains. “This made for a much more unpredictable show and gave all attendees an opportunity to participate.” The $20,000 in prizes, sponsored by United Group's member and supplier companies, included high-ticket items such as plasma screen TV sets, a Segway, appliances and cookware.

To keep the awards program moving, the show went to “commercial breaks” that announced groups of award recipients. As in the real TV studio, applause signs signaled to audience members when to clap, underscoring the game-show ambiance.

After the “Showcase Showdown” finale, which honored the two big award recipients of the evening, credits thanking the sponsors and awards recipients rolled on giant screens at the show's end, which came right on schedule. “The outcome was a client who learned that there is an alternative to staging a traditional three-hour awards show, and that awards shows can involve the audience as well as award recipients,” Jenkins says. “They can also attract future sponsorship to a program when sponsors can see a tangible benefit such as recognition, advertising impressions and heightened visibility in a program that connects with an audience.”