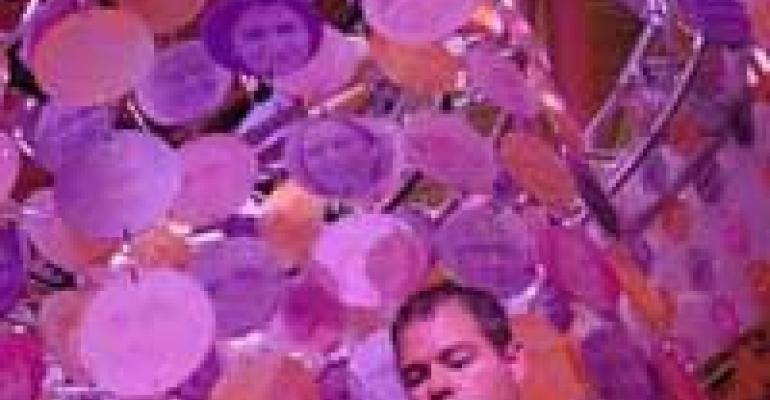 An event team keys on circles to create an unbroken line of interactive communication at an employee-engagement event.

It has been said that community is created in a circle. Minneapolis-based event planners Cheryl Kranz of Creative Events by Kranz and Ryan Hanson, CSEP, of BeEvents proved that and more at an all-employee meeting to introduce the new division of a big medical-device company.

With just 10 weeks' lead time, the event team faced the challenge of building unity among 5,000 employees, introducing a new CEO and creating a common corporate culture. “In addition to the client's objectives, we added one overreaching design objective,” Kranz says, “and that was to create an environment that would offer 5,000 different events for 5,000 people. We wanted to ensure that each attendee would experience the message, vision and pulse of the corporation in a way that resonated with them individually.”

Using the company's logo of three interconnecting circles as its theme, the team created “The CRV Experience” — 200,000 square feet of experiential branding — within the halls of the Minneapolis Convention Center. The event incorporated everything from museum-style build-outs to interactive computer kiosks, all centered on a 300-by-150-foot custom-designed logo carpet that designated three distinct interactive circles for employee engagement.

The Communication and Dialogue Circle included a small stage set for 75 to facilitate “fishbowl” conversation groups as well as 36 computer kiosks, where employees were able to comment on the vision shared with them at the general session. Their feedback was presented at the closing general session.

In the Commitment Circle, employees could sign a commitment wall and create videos presenting questions for leadership or sharing success secrets from their individual division. The videos were played back throughout the event in various lounge areas so that attendees could vote for their favorite, which was then broadcast at the end of the closing general session.

This area also featured the focal point of the room: a 16-foot custom-designed chandelier made up of 1,200 photos of the employees. Throughout the three-hour event, photos printed in the new brand's colors on acrylic discs were linked together and hung on the shade by members of the executive team. “The chandelier symbolically showed that CRV is the employees melded together into something beautiful,” Kranz explains.

The third circle — the Patient Circle — featured a circular labyrinth where attendees could reflect on how the company's products improve people's lives. The outermost ring featured patient photos hung gallery-style while the inner rings projected videos of patients telling their stories and giving medical updates.

Kranz says, “It was pretty incredible to see the high level of engagement, enthusiasm and energy emerge as 5,000 people each found their way to their own story of CRV.”