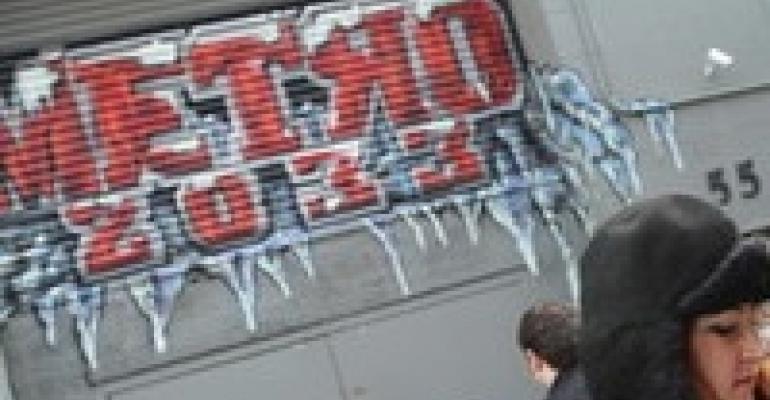 Few events require a military escort for entrance to a secret underground location. However, when faced with nuclear fallout and the threat of mutant creatures, it's probably a good idea. At a January press event for the release of THQ's “Metro 2033,” a video game set in post-apocalyptic Russia, event producer Guy Genis of Toluca Lake, Calif.-based Eventmakers did just that.

Actors dressed as Russian soldiers — complete with gas masks and guns — led 30 members of the San Francisco press down a stairwell filled with specialty lighting, sound effects and fog, creating a dramatic entrance to the basement-level nightclub. Genis and his team had transformed the club into a realistic depiction of the video game's environment — a decaying Moscow metro system turned shantytown. Props including distressed carts, kettles, pots and pans, sandbags and ammunition crates created various vignettes featured in the game. The use of makeshift lighting, such as bare flickering light bulbs, added a realistic element to the scene, as did clotheslines strewn with garments covered in theatrical paint. Printed scrims of graphic imagery from the game were set up around the perimeter of the room to further immerse the guests into the world of “Metro 2033.”

Working in a basement with a low ceiling, uneven rigging points and exposed water pipes presented its design challenges, specifically with the custom-made scrims. “The scrims had to be cut and spliced in several locations to fit around water pipes and other existing equipment,” Genis says. “Once we cut a scrim, the challenge was in getting rid of all the wrinkles in the imagery.”

Genis hired Russian actors dressed in costumes reminiscent of the game to wander about the space portraying different characters. Among these were a “former Russian commander” and his “son,” who greeted guests and took drink orders as they arrived. “The boy took drink orders in Russian while the father translated in broken English,” Genis says. Cocktail fare, catered by Prana Cafe in San Francisco, included an assortment of tray-passed hors d'oeuvre as well as a sliced filet mignon buffet and a mashed potato bar with all of the trimmings.

The focal point of the room — and key element in the game's environment — was a bonfire, which, due of course to fire marshal restrictions, had to be re-created using special effects. Genis turned to a feature film-grade light/fire machine, which incorporated steam and light for a realistic “fire.” “It provided the ultimate ‘wow’ factor as the guests entered the space.”