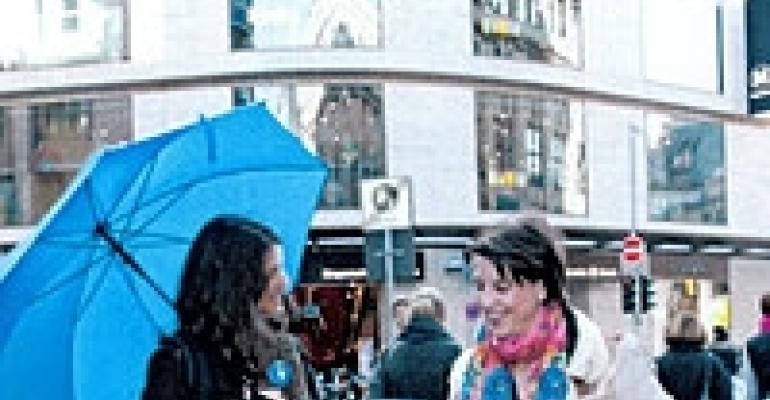 There is no denying the power of the human voice. Indeed, it is the first sound a baby hears in the womb, forming the initial bond between mother and child. When babies are born prematurely, a voice is often the only connection a parent has with an infant.

With that in mind, the European Foundation for Premature Infants and Newborns, working collaboratively with German event firm Joke Events and medical technology company Drager, created a simple yet effective “sing mob” promotional event both to commemorate World Prematurity Day and to introduce the “Ene Mene Mini” campaign. The campaign — named after the familiar children's counting song — is an initiative to raise awareness of the special circumstances faced by premature babies and their parents.

“Since the voice is often the only connection the parents have with their premature child, the human voice became the core of the idea,” says Joke Events marketing manager Natasha Dyck. “We needed an extremely sensitive approach that both moved people at one moment and shocked them at the same time.”

Using the flash-mob concept, the event team created six small choirs featuring four to five singers who were dispatched throughout the streets of Dusseldorf on World Prematurity Day. Much like carolers, the choirs approached random pedestrians and shoppers, and sang traditional and contemporary lullabies, including “Good Evening, Good Night,” “The Moon Has Risen” and Billy Joel's “Lullaby.”

After each mini concert, the singers explained the Ene Mene Mini initiative and asked for support of its online petition.

Since the program's budget was small, the team wanted to avoid the need to obtain expensive licenses required for outdoor fairs and festivals. This was accomplished by planning the event as a guerilla campaign.

To extend the reach of the event even further, photographers and video teams followed the different choirs, recording and uploading the concerts to social media networks such as Facebook and YouTube. As a result, visits to the website www.enemeinemini.de went up dramatically, the Joke team says.

Pre-event rehearsals ensured proper placement of the videographers and photographers so they would not detract from the performances. In an era of high-tech event tools, the event relied instead on the human voice expressing heartfelt concern.

The campaign is a nominee for a Special Events Gala Award.

Sometimes all it takes to reach someone is a song. And in this case, that was enough.