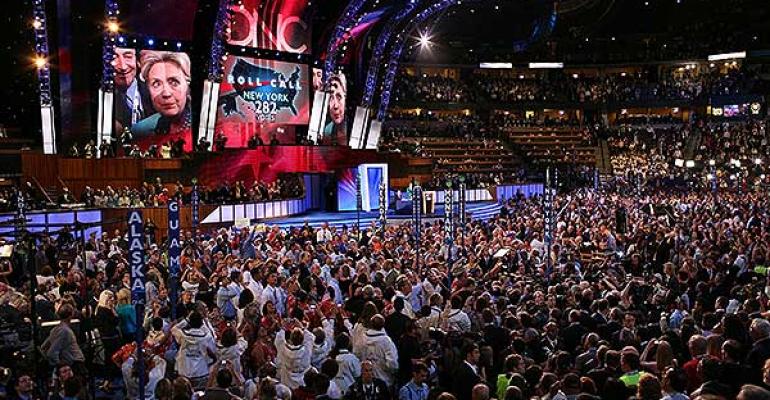 They don&#39;t hit till 2016, but the big Democratic and Republican national conventions will bring lots of events to their host cities&mdash;and local event pros are already at work trying to win the business

The event news for Cleveland and Philadelphia has been great lately. These cities will play host to the big U.S. presidential nominating conventions next July, with the Democrats in Philadelphia and the Republicans in Cleveland. And while those events are more than a year away, the event work in those communities has already started.

Cleveland-based Colortone Staging and Rentals has been at work on convention business for some time; the Colortone team helped the city with its pitch to win the convention, notes director of business development Rick Turner.

With the announcement that Cleveland won the RNC, the Colortone team is now working with the local CVB and other event venues to ensure what Turner calls "a soft landing" once the event slate is set.

Turner sees his company as a strong contender to win event business. While some production companies stress social events, "We specialize in corporate event production," he explains. "We're the go-to company in our market."

The story is much the same for Philadelphia and the Democrats.

PREPPING FOR PHILLY The team at AFR Furniture Rental, headquartered across the Delaware River from Philadelphia in Pennsauken, N.J., held its strategy meeting just last week to address DNC business. "It's very exciting to have the DNC in Philadelphia," says vice president of brand management Tricia Schmitt. "We have a prospect list and will begin our sales efforts next week." The AFR team has the experience to back its pitches; the company worked on several presidential conventions, Schmitt says, including in 2012.

"The experience of showcasing not only the places that contribute to Philadelphia’s landscape but also the people and the pride with which we welcome visitors to our city really invigorated us to jump in and start creating experiences for the DNC," Bedore says. "The city is certainly gearing up, both in terms of celebratory--opening and closing events--and large-scale event planning but additionally in smaller, boutique entertaining opportunities that are beginning to take shape."

Bedore thinks that her city's culture has plenty to offer DNC delegates.

"Our culinary director has also been developing specialty menus that speak to the cosmopolitan, but straightforward attitude of Philadelphia cuisine," she says. "Always innovative, but never fussy, Philadelphia has such an authentic approach to dining and entertaining, and we’re really excited to capture that for our visitors."

In some good news for South Jersey Party Rentals, with offices in Philadelphia and Pennsauken, the company already has some prospects in the works for the DNC, according to account executive Joanne K. Hulme. The company hopes to hear shortly about a big tent job quoted within the last two weeks.

PREP BEFORE THE PARTY Hulme and her team have worked hard to win these jobs.

"I have taken steps even before any official announcement" that Philadelphia won the DNC bid, Hulme says. "I have investigated any status on my previous security clearance from the office of The Secret Service that I obtained in order to be a vendor for this client. I have reached out to a production company that South Jersey Party Rentals has worked with previously with press conferences for the President and Vice President. I have touched base with other vendors that were involved last time around."

But Colortone's Rick Turner says that the DNC doesn't have to rely entirely on local resources. Even though he hopes to be serving many of the Republicans' events in Cleveland, "Tell the folks in Philly that we'll be glad to help them out too," he says.

ASK THOSE WHO'VE BEEN THERE For some smart advice on how to handle these big conventions, it's hard to beat the advice of Dan Hooks, CERP, head of Party Reflections of Charlotte, N.C. His company handled a massive roster of events for the 2012 DNC, which saw more than 35,000 guests served and entertained. Producers, caterers, event planners and delegates required full event rental support on a 24-hour basis for the full week they were in Charlotte. Party Reflections won a Gala Award in 2014 for its work.

"The best advice I can give is to be patient with the process," Hooks advises. "The fury and excitement over being selected as the host city creates a fervor to plan and get ready for the event--a lead time and timeline most of us in the rental business never get to experience."

"The problem is we were ready for orders to start pouring in--and it certainly did not happen that way," Hooks says. "From the rental perspective, we were proactive and made sure all of our existing customers knew we were preparing to help them in any way they needed. We tried to stress to each of them the importance of allowing us to be part of the process. We knew we were more than likely going to be getting our information through the third-party filter and wanted to make sure everyone realized that our inventory was finite at some point."