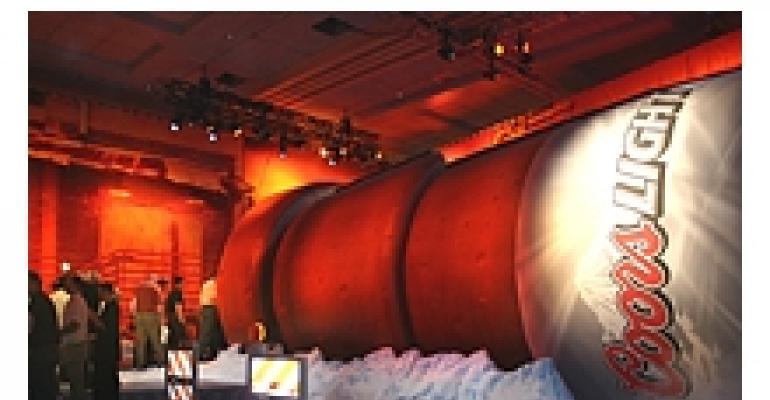 MESSAGE IN A BOTTLE

THE inside of a beer bottle may seem like a strange setting for a party — but not one for 3,000 attendees of the 2005 Coors Distributors Convention in March. That was Franklin, Tenn.-based Q-We Get It's idea for a super-cool show that moved attendees away from the annual event's traditional exhibit hall format of past years. “The Coors message is all about ‘cold,’” Stephen Isbell, Q partner and managing director, notes. With that message in mind, the Q team envisioned the “Cold Revolution” themed event as a frozen “stadium” built inside a bottle of Coors Light, the convention's featured brand.

Not surprisingly, creating the oversize beer bottle setting proved to be a big job. To re-create a frosty bottle interior, Q contacted Stockholm, Sweden-based Big Image Systems, which designed cutting-edge digital graphics printed on more than 34,000 square feet of fabric. The sheer volume of fabric worried the fire marshal at the convention venue, the 55,000-square-foot ballroom at Walt Disney World Dolphin Hotel in Orlando, Fla. “Even though typical poly materials met the fire rating, he was concerned because the whole room would be enveloped in this material,” Isbell explains. A call to Big Image netted a fire-retardant cotton material that calmed the marshal's concerns. “He couldn't have forced the issue,” Isbell says, “but he felt safer with the new material.”

The Q team also had to comply with hotel regulations requiring building permits for structures built more than 3 feet off the ground, which were necessary for the VIP sky boxes — each named for a Coors brand, such as Killian's and Keystone — that Q wanted for the stadium. Additionally, 15 tractor-trailers' worth of materials had to be transported to the fifth-floor ballroom via a single elevator — which broke down on the first day of the week-long load-in — and loaded out in just 24 hours post-event.

Despite challenges that threatened to put the party on ice permanently, on event night guests poured through the neck of the beer bottle to enter the stadium. Inside, Big Image's graphics of Coors' famous snowcapped peaks and giant six-packs against frothy beer and condensation-covered glass set the scene. Comedians Colin Mochrie and Greg Proops from the TV show “Whose Line is it Anyway?” hosted the event, which featured acts including the Pussycat Dolls and Tom Petty & The Heartbreakers, mixed with time for networking, eating — and drinking ice-cold Coors beer, naturally.

Washington-based event planning firm PARADIGM EVENT MANAGEMENT has opened an office in Miami. SHAKYRA ADORNO has relocated from the company's headquarters to serve as head of the new office. Call 305/766-6722; www.paradigmevent.com. · Los Angeles-based design and production agency CMS COMMUNICATIONS has established an East Coast office in Orlando, Fla., and appointed PATRICK GRADY as general manager and vice president of business development at the new site. The company also opened its northern California office in Pleasanton, Calif.; DONNA DOUGLAS has been named general manager of business development at that location. Call 310/645-5604; www.cmsbiz.com.

Chicago-based RONSLEY SPECIAL EVENTS, a division of THE RONSLEY GROUP, has acquired MILLENNIUM EVENTS, Chicago. Millennium partners BURT RUBENSTEIN, JIM DILBECK and JIM LOSEK have joined the Ronsley team. Call 312/649-0777; www.ronsley.com. · MEETINGSCENTRAL.COM, a Web site that offers live group hotel bookings, has expanded its services to include group bookings at hotels located in more than 20 countries including Australia, Italy and France. The site continues to offer the same free event planning tools for international bookings as it does for U.S. bookings. Visit www.meetingscentral.com.