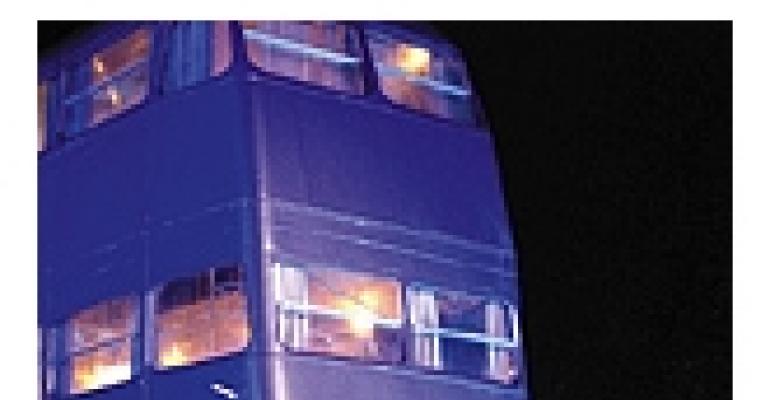 HOGWARTS School of Witchcraft and Wizardry may be set in a remote Scottish village, but for the DVD and video launch of “Harry Potter and the Prisoner of Azkaban,” the third in the series of hugely popular books and movies, London-based Imagination Ltd. relocated the school to the heart of London.

The event, designed to attract the attention of international media for client Warner Home Video, required Imagination not only to “re-create environments that were true to Harry Potter and maintain the magical quality of the films, but provide an iconic ‘press moment’ that would serve as an eye-catching, dramatic [experience],” explains Nichola Goad, Imagination's head of event planning. To do so, the company captured the movie's enchanting elements through scene-stealing decor and a surprise appearance by the film's stars.

The Society of the Middle Temple, a historic London building that channeled the spooky atmosphere of the film, served as the venue for the launch, which was attended by 800 guests including contest winners and journalists. The decor — created using props from London's Leavesden Studios — showcased four major sets from the film: the Great Hall at Hogwarts, the Defense Against the Dark Arts and Divination rooms, and Honeydukes Sweet Shop, where guests could sample creepy treats including marshmallow shrunken heads and jelly snakes.

While getting the decor perfect was a top priority given the avid Harry Potter fans in attendance, “We were challenged by the tight build times at Middle Temple,” Goad says. “[Middle Temple's] hall is a working dining room during the week, and we had to work outside of dining hours and keep our installation of props down to a minimum.” To create one of the most film's most magical effects, the enchanted ceiling of the Great Hall, the Imagination team suspended 200 battery-powered candles from netting attached to the hall's high ceiling.

Another challenge was keeping the “Knight Bus” — the purple, triple-decker bus that transports characters in the film — hidden in the days leading up to the event. The bus was delivered from Leavesden Studios in two pieces and built on-site, then concealed on a back street in central London for several days. On event night, the “Knight Bus” appeared at the venue carrying the movie's three lead actors, Daniel Radcliffe, Emma Watson and Rupert Grint, who posed for photographers. “We only ever get one chance with the press, and it went perfectly,” Goad says. Perfectly indeed — the event generated more than $9.5 million worth of television and print media impressions.