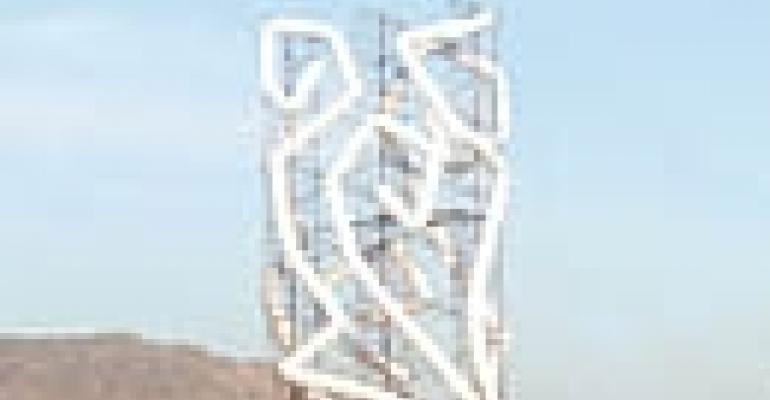 FOR DORON GAZIT, president of Van Nuys, Calif.-based Air Dimensional Design, an event last October celebrating the 100th anniversary of the city of Mexicali, Mexico, offered the ultimate blank slate for event design. Mexicali officials were planning a performance by famed tenor Luciano Pavarotti and had selected Laguna Salada — a dry lakebed outside of the city — as the concert's site, when it became apparent that the stark setting required some dramatic design elements.

“They called us just three weeks before the event, because they realized that there was a major problem,” Gazit says. “They were going to bring 50,000 people to an event on a dry lakebed in the middle of a desert, and it was very flat.” To combat the featureless nature of the site, the AirDD team created a plan that called for the installation of 17 scaffolding towers ranging from 40 feet to 75 feet in height. The towers were then fitted with the company's Airtubes — long, flexible, inflatable tubes that intertwined with the scaffolding to create what Gazit describes as “large-scale musical notes, but more abstract,” as well as enormous “air-flower bouquets.” The structures, which “could be seen from miles and miles away,” he says, served as landmarks for concert-goers driving to the event, as well as meeting places once they arrived.

What originally was expected to be a fairly straightforward installation ended up requiring all of AirDD's creative energy. During the three weeks leading up to the event, Gazit and his team tackled a long list of challenges, from working in 120 degree Fahrenheit heat to handling the “wait until tomorrow” attitude of local workers to avoiding the desert's yellow scorpions. On top of all this, the team got stuck in the middle of a dispute between customs officials and the mayor of Mexicali. As a result, “[Customs] did everything to undermine the event,” Gazit says. “Our truck with tons of equipment was locked up at the border, and we couldn't start work until four days before the event.”

There were also requests from Pavarotti's people for AirDD to complete last-minute design changes. “Two nights before the show, they called me to see if I could change the stage and make it look better,” Gazit recalls, which he did by using rows of tightly packed Airtubes to create a backdrop that was used for lighting and projections. Another request came just four hours before the show, when he was asked to do a special tunnel treatment for the concert's VIP entrance.

Despite the potential for these problems to leave his team singing the blues, “We enjoyed it,” Gazit says. “The work would have been really boring without all these challenges.”