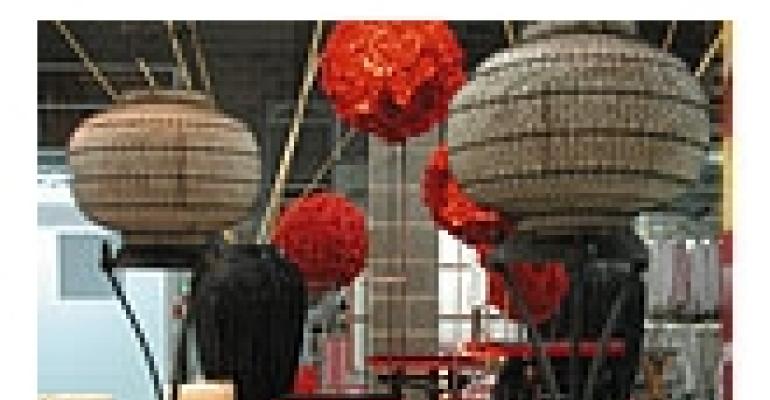 WHAT do you do if you have a 50,000-square-foot warehouse and design studio brimming with vases, candelabrum, furniture, linen and tabletop items? Throw a party to show it all off, of course. That was the idea behind the “Perfect Celebrations” event that Evantine Design hosted for 200 Philadelphia-area event professionals in April, says owner Brian Kappra. It was also an opportunity for guests — who included Evantine's industry partners, hotel food & beverage staff, caterers, and socialites involved with nonprofit galas and fund-raisers — to get together and take in the latest trends in event design.

While Evantine's warehouse is packed with products for parties, the event also gave other companies the opportunity to showcase their wares. Evantine partnered with Philadelphia vendors including Party Rental Ltd. and The Total Table to display the latest in event furniture and linen. “We weren't really interested in having it only be about promoting our products,” Kappra says. “We wanted to give the people attending different options.”

To fill the spread-out space, Kappra's team created unique environments throughout the warehouse, which was divided into sections including an Asian area — “Asian is very much still in,” he notes — and a contemporary zone. Evantine also designed themed food stations for each space, such as “Spice Market,” modeled after the hip New York restaurant. MANNA Catering, a nonprofit company that supports many local fund-raisers, created the cuisine.

It was the contemporary area where Evantine designers mixed old and new elements — a hot trend, Kappra says — that provided the most talked about aspects of the event. “We've found that the contemporary thing has been going on for a while, so now we're seeing it starting to soften a little bit,” he explains. “We're seeing contemporary pieces mixed with a little bit of a flourish, such as using an oversize damask print linen, but putting it on a square table.” At “Perfect Celebrations,” toile-patterned cylindrical chandeliers hovered above an acrylic illuminated table, while a modern pink-and-brown tabletop color scheme featured antique floral-patterned round plates nestled on oversize pink square plates. “What we wanted people to think is that maybe they've had equipment lying around for 10 or 15 years, and it might be time to look at it again and use it in an updated way,” Kappra explains.

By evening's end, attendees left with a warehouse's worth of ideas for future events. “That ended up being the most frequent comment we got back from people — they left with such enthusiasm for what it is they do and what's out there for them to work with,” Kappra says. “Sometimes when you're on your own turf you can get a little bit of tunnel vision, and we wanted to show them what their options are.”