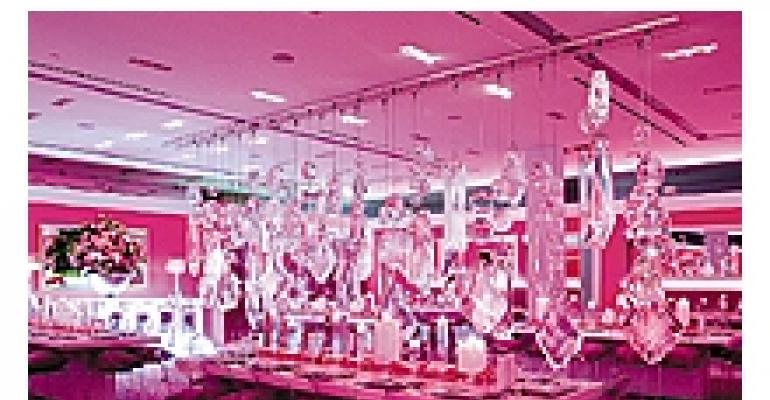 FOR a branding event to launch the new packaging of upscale Canadian department store Holt Renfrew, Toronto-based event designer Nicholas Pinney wanted to incorporate into the decor a large chandelier inspired by a lighting fixture in his home. The twist? He wanted the chandelier to be made not of the customary crystal, but of ice.

Pinney turned to Hensall, Ontario-based Iceculture to make his design sparkle. The company had created hanging ice sculptures before, but general manager Heidi Bayley notes that the nature of ice makes working with it a challenge every time. “Whenever you're hanging ice — even if it's not over someone's head, which we avoid for obvious reasons — it's very heavy and, of course, it melts,” Bayley says. “You don't want it to drop in the middle of the event because it feels disastrous even though nothing disastrous actually happens.”

For the Holt Renfrew event, held in a custom-built 2,500-square-foot room at the store, a ceiling rigging system provided the strength needed to support the 3,000-pound chandelier, created from 34 ice prisms each weighing 75 pounds. The prisms hung from the rigging on acrylic dowels inserted into holes drilled in the ice. “We've learned that you can't use metal rods because they conduct heat — they melt through the ice very quickly,” she says. “Also, the holes have to be perfectly centered because otherwise the ice will hang off-balance, and therefore melt off-balance.” On the floor underneath the chandelier, a rectangular acrylic reservoir lined with rose petals captured drips.

A 12-foot-long, 1930s-style cabinet made from ice provided another frosty focal point for the room. Iceculture froze mirrored panels into the front of the cabinet — a company first — while a large mirror attached to the wall above the cabinet reflected the chandelier. Because of its size and weight, the cabinet had to be constructed in pieces, which were transported to the event site in containers filled with dry ice — a step that saved the design when a delay loading it into the store left the containers exposed to the September heat for two hours. “Not surprisingly, logistics become quite a big thing when you're working with ice,” Bayley says.

Despite the icy accessories, event guests warmed up to the room design. “Part of the beauty of hanging ice is seeing the drops fall as it melts — people are amazed because the ice doesn't melt as fast as they expect it to due to the size of pieces,” Bayley explains. “Plus, it just looks cool.”