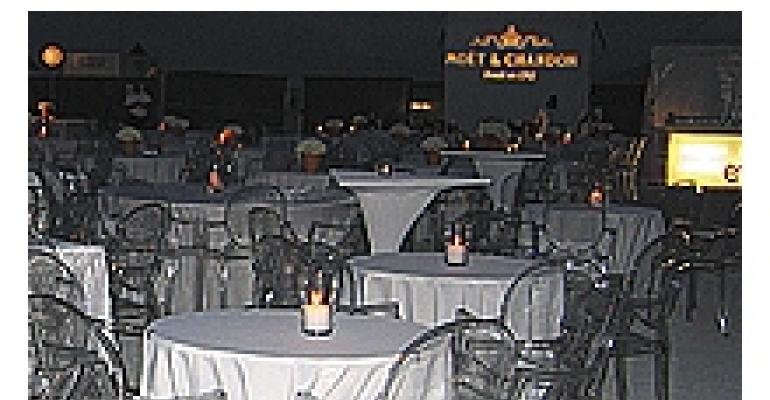 TURN UP THE HEAT

THERE'S YOUR BASIC backyard barbecue, and then there are barbecues that really sizzle. The Moet & Chandon BubbleQ, held on Feb. 25 as part of Miami's South Beach Wine & Food Festival, was definitely one of the latter, notes Kelly Murphy. The co-owner of Pompano Beach, Fla.-based Panache Party Rentals, one of the sponsors for the fund-raiser, worked with a team of vendors to create a sultry South Beach vibe for the on-the-sand soiree.

Hosted this year by chef Dean Fearing of the Mansion on Turtle Creek in Dallas, the annual BubbleQ pairs bubbly with upscale barbecue prepared by a crew of celebrity chefs. This year, the group included Kent Rathbun of Abacus & Jasper's in Dallas and Kenny Callaghan of Blue Smoke in New York. “We flew in famous barbecue chefs from around the country, and they worked with student volunteers to raise money to benefit the school of hospitality at Florida International University,” Murphy recounts. “It's the ‘who's who’ of the food and wine world, lots of beautiful people, set under the stars — it's very Miami.” On hand to sample the chefs' creations was a crowd of 1,500 barbecue-loving foodies, including actress Shannen Doherty, model Naomi Campbell, basketball star Shaquille O'Neal and “Today Show” host Al Roker, who demonstrated his own grilling tips.

The event setting — the beach in front of the famed Delano Hotel, noted for its ultra-chic white-on-white decor — provided the inspiration for the all-white design scheme. Panache dotted the beach with alternative seating areas that gave grazing guests plenty of spots to sit when they needed to rest. Shimmery white linen covered tables topped with LED pillar candles and white floral arrangements, while the company's clear acrylic Philippe Starck-designed “Ghost” chairs provided a see-through view of the sand underneath. Behind the central bar — which offered several varieties of Moet & Chandon champagne, of course — a huge white spandex-covered truss served as a backdrop for gobos in the shape of the champagne maker's logo.

Setting up equipment right on the sand provided its own set of challenges — “We had to drive our vehicles onto the beach,” Murphy notes — but the real concern for the outdoor event was the weather. “We did this event without the protection of tenting — we have been blessed in the past with perfect weather, and this was the first year we got a little nervous and talked about event insurance,” she says. And while it did sprinkle for about 20 minutes, the drizzle “didn't dampen the spirits of any of the party-goers. Great food, wonderful drinks — it was an awesome event.”