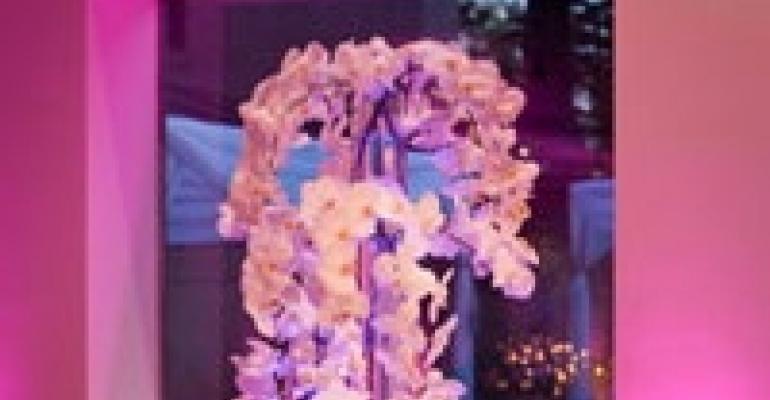 SOMETHING OLD: “I'm seeing a return to all-white weddings with a twist,” Libby says, noting that mixed metallic accents in gold and silver — such as leaves in arrangements and gold patent leather napkin rings paired with silver chargers — are hugely popular this season. “We're also using antique metallic mercury glass and votive candles to put an Old World twist on modern designs.” As for flowers, hydrangeas remain a tried-and-true favorite, and “romantic blooms such ranunculus never go off the bridal radar.”

SOMETHING NEW: Bling is still the thing. “Crystal and rhinestone embellishments are still holding strong,” says Libby, who offers a sophisticated yet sufficiently sparkly update for 2010 brides: masses of tightly clustered crystals, either added to arrangements or taking the place of floral.

SOMETHING BORROWED: As a gesture of good will in a tough economy, Libby offers his clients free access to various accent pieces from his inventory. “I'd certainly rather have 15 petite crystal candelabras making me look like a hero at an event than collecting dust on the warehouse shelf,” he says. Another tip: Borrow from your own event. “We find ourselves resetting components from cocktail parties and ceremonies to be used as enhancements for after-parties.”

SOMETHING TRUE: “Everyone, on every level, is price-conscious these days,” Libby says. “Therefore, giving the best value for the dollar is really the most important tool in closing a deal.”

SOMETHING OLD: Some flowers simply never go out of style. “There is a return to classic elegance,” Held says. Garden roses remain a standby, he says while “dahlias are the ‘comeback’ flower.”

SOMETHING NEW: Go big with the blooms, Held advises. And stick with one type, rather than mixing everything together. “Today's brides want a cleaner, more stylized look,” he says. “Orchids are very popular — especially mixed with an assortment of exotic leaves.”

SOMETHING TRUE: “Brides are more careful these days,” Held says. “It's more important to be creative and put the dollars where they show.” To that end, Held recommends pulling back on flowers for cocktail tables, powder rooms and aisle decorations. “Don't skimp on ceremony flowers, which will show in pictures,” he says. “And never compromise on the bridal bouquet.”

SOMETHING OLD: Get plucky. According to Newberry and Tolve, feathers are making a big comeback this year. “Large plumes are very dramatic when included with flowers,” Tolve says. “Brides love the romantic feel of them when they are done in a tasteful way.” And while feathers are initially expensive to purchase, they can be used repeatedly and simply rented to the client.

SOMETHING NEW: “Brides this year are into rich colors, mainly purples and pinks,” Newberry says. The most-requested flower: “Phalaenopsis orchids! Last year was all about white orchids, but this year we've had requests for all shades. It's by far the most popular flower.” And one that can make a bold statement with just a few stems. “If a client is on a tight budget, we'll do a few Phalaenopsis orchid stems in tapered, cylindrical vases surrounded with tons of different candles — floating, votive. It's very dramatic and cost-effective.” And to hold the blooms: “Modern containers and vessels, such as black candelabras, and sleek, streamlined vases are very popular,” she adds. “Modern romance is the name of the game this year.”

SOMETHING TRUE: “Clients are definitely budget-conscious, but they aren't skimping on centerpieces,” Tolve says. “The ceremonies are less elaborate, with more of the money put into the reception.”

SOMETHING OLD: Old-fashioned flowers once considered too common or lowbrow are making their way into bridal arrangements, according to Herrier, who has been incorporating such humble blooms as imported pom poms and Dutch mums into creative wedding centerpieces. “I'm betting that your grandmother's favorite flower — high quality mini-carnations — will make a comeback,” Herrier says. “I've been saying that for years!”

SOMETHING NEW: Personal over presentational is a guiding design force. “There is less emphasis on massive, showy floral displays and more emphasis on floral designs that are intimate and detailed,” Herrier says. Some popular choices: exotics, such as orchids, succulents, thistles, scabiosa pods, coxcomb and what Herrier refers to as “sprigs and twigs” — unusual branches or bush foliage used as the focal point rather than the accent. “These days it is not unusual to use only flowering branches for the entire arrangement,” he says, noting that he likes to incorporate the uncommon, such as wild green raspberry brambles and orange kumquat branches, into his designs. “It is an elegant, architectural look, and costs much less than filling the same amount of space with densely packed flowers.” And don't forget the water. “These days, how we design an arrangement below the waterline is almost more important than what we do above it,” he says. “Because today is more about personalized, detailed work, we are able to design more architecturally, with more creative freedom — and with a lot fewer flowers.”

SOMETHING TRUE: “In terms of floral, people will only remember two things: what the bride and groom looked like taking their vows, and the reception centerpieces,” Herrier says. “So the majority of the floral budget should spent be on those items.”