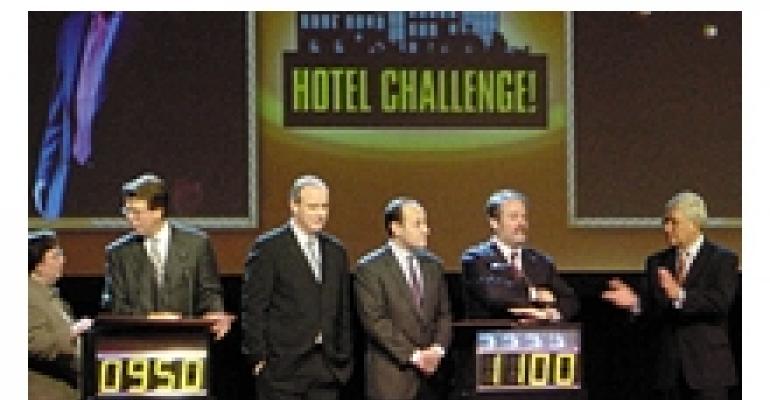 In the old days, event games were strictly kid stuff. As Stacey Paul Barabe, CSEP, director of sales for Orlando, Fla.-based Event Mall, puts it, “Before, you would show up with a dart game and a pop-a-shot and call it an ‘event.’” Now, games apply technology for more exciting rides, memorable experiences and branded take-home extras. From poker to photo kiosks — and many diversions in between — experts help you get ahead of the game.

According to Barabe, shifting trends in the game industry in the past five years show customers asking for “a game that facilitates a purpose.” The point of play might be employee training — Fort Lauderdale, Fla.-based Creative Imagineering's Dean Lichtenwalner notes an increase in games that both train and entertain, or as he puts it, “entertrain.” To engage trainees, “We create a game-show atmosphere around questions that pertain to the business industry content that the company is presenting,” Lictenwalner explains. With Creative Imagineering's TV-game-show-type equipment, participants learn in a “fun and informative way,” he says.

A relaxed carnival atmosphere provides another possible environment for team-building. Plainview, N.Y.-based Interactive Entertainment Concepts offers games inspired by carnivals, such as tip-the-troll and speed-pitching cages, as a way for co-workers to build a rapport. “Carnival games get people to work together and teach good values for the workplace,” IEC's Gregg Dukofsky says. “Employees let off steam, have fun and see people in a different light.”

Margaret Fescina, senior event coordinator at West Babylon, N.Y.-based NY Party Works, suggests inserting a sport-related game as a break in a series of business meetings. “Some interactive entertainment might not only clear an employee's head but also help him relate to his co-workers as real people who have skills and interests outside of work,” she says. Barabe adds that she has set up golf and basketball games in the foyer to serve as breaks between meetings because attendees can't go outdoors, and “They need to stimulate their brain — a game keeps them focused and just distracted enough.”

Not only do games serve as diversions, but Dukofsky notes the increased use of casino games in trade show booths to entice potential customers. “Dealers have info on the company and talk about the company as they deal the cards,” he explains. “It's a captive audience.” The rise in televised poker games, such as the World Poker Tour, and the popularity of online gambling are driving the popularity of IEC's poker and blackjack games. Other trade booth traffic-boosters from the company include a robot, talking parrot and a see-through booth where people try to catch floating dollar bills.

Everyone wins when a game ends with a take-home freebie. Experts praise newer models of games that manufacture a take-home product, creating an instant memory. “People are leaving with something, and it can be branded,” Barabe explains.

A prime example is the photo kiosk. Newer models go far beyond snapping a quick photo — Barabe describes a kiosk that “takes a picture and then sketches you as a Monet or Van Gogh painting, or it distorts your face, or turns you into a wacky cartoon character.” Such double-duty photo systems “appeal to a wide variety of people,” Fescina says, while also having the ability to be “customized for specific corporate events.”

Virtual-reality games “offer experiences that can feature a client's logo, photo and/or phrase inside the experience,” explains Steve Hillanbrand, CEO of Bardonia, N.Y.-based Amusitronix. Along with unforgettable branding, virtual reality has improved on mission-to-Mars-type rides, with new high-tech features such as “high-resolution graphics, stereo sound and lightweight goggles,” he adds.

The essential element of successful gaming is a perfected plan, the game-providers say. Dukofsky notes, “The biggest mistake event planners make is not having a proper floor plan.” Barabe suggests, “Make sure you have an up-to-date diagram that includes power.” She adds that game clients should watch out for insurance pitfalls. “Make sure that the company you're dealing with is insured for the equipment you are renting,” Barabe explains. “Because they could have insurance for pinball games, but they might not have it for your bungee-ball game.”

Something else to consider when using a game is the different demographic each game appeals to. The biggest mistake event planners make “is not gearing the entertainment to the personality of the group,” Fescina says. “Try to gauge what would appeal most to this particular group, and not just choose games because they fit in with a theme.”

A well-chosen game amuses both spectators and players. Hillanbrand explains, “Half the fun of virtual reality is watching the facial expressions of the participants.” The right game for the event provides a sense of fun even for those not playing the game. “With a golf game we have, you can see all the guys over there laughing and swinging, it gets kind of addictive; when you see people standing around watching other people and they are waiting,” Barabe says. “That's exciting; you know they are engaged.”