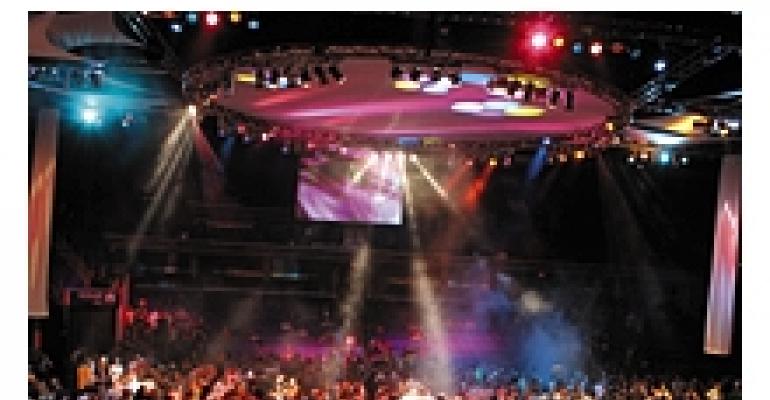 SPECIAL special events call for special entertainment. And no acts pack more glamour than headline performers. With their name recognition and pop-culture cachet, celebrity singers, comedians and speakers can titillate — and motivate — as no other talent can. But is it enough simply to snag the biggest name an event's budget can buy? No way, event entertainment experts say. What's most important is matching a headliner to an event's objectives and environment, to ensure maximum impact and maximum value.

When launching a new investment service to a select cadre of customers, Barkley Kalpak Associates client Quintiles Transnational needed an event performance that signaled exclusivity and excellence in equal measure.

After considering several performers who might make the grade, New York-based BKA tapped R&B chanteuse Vanessa Williams to deliver a soulful set to Quintiles' assembled VIPs. Why Williams? For starters, she is just plain talented, says BKA's Jeff Kalpak. “Her elegance and vocal virtuosity certainly appealed to the demographic,” he notes. On top of that, Kalpak adds, Williams is known for “her skill and comfort level in engaging a corporate audience.”

Showing the communications savvy that Kalpak cites as critical when customizing headline talent to specific event goals, BKA made its client's needs explicit to Williams from the start. An offer letter to the performer included ground plans, renderings, running orders and design specs, Kalpak notes. In response, Williams “was willing to design her performance to work within the parameters of the intimate setting” — in this case, a tent installed on the grounds of New York's Lincoln Center to accommodate a group of fewer than 200 attendees. Not only did the singer agree to “work with fewer musicians and really scale down her performance” from its public-concert scope, but, in a nice compliment for the corporate entertainment operation, the Williams camp praised BKA for its “clear and comprehensive” communiqué, Kalpak reports.

The outcome was an elegant private music experience in a “living room”-like setting, where a “graceful and gracious” Williams sang chart-topping hits and interacted with the delighted event audience, in what Kalpak calls “a truly spectacular show.”

For Richard Pollak of Dallas-based Rainbow Entertainment, helping clients hire the right headliner often comes down to theme interpretation. The 18-year entertainment and event services veteran notes that a well-suited celebrity act can go far to freshen up a Western motif — among the top event-environment requests of corporate clients coming to Texas for conferences or other business events.

As a prime example, he cites The Special Event 2006, where a cosmopolitan Western-theme welcome event at landmark Dallas club Gilley's demanded the perfect performer. Enter Johnny Lee, the country singer famous for the hit “Looking for Love,” from the 1980 John Travolta movie “Urban Cowboy” — a classic certain to be familiar to most event pros in attendance.

Recounts Pollak, “We could have had any country singer, but since we were having the event at Gilley's” — Lee was discovered by “Urban Cowboy” producer Irving Azoff while singing at the original Gilley's in Pasadena, Texas — “and we were getting the original mechanical bull from the movie, it only made sense to get totally into it with a John Travolta look-alike and Johnny Lee singing.”

The performance, with its ties to the event's venue and props, made for a memorable occasion. And, the well-chosen headline act helped demonstrate to the event-savvy crowd that the popular regional theme could entail much more than the “red-and-white-check tablecloth, lousy barbecue and twanging fiddle” many might associate with Texas, Pollak adds.

A multi-day event that kicked off with a music-themed bash at Cleveland's Rock and Roll Hall of Fame and Museum, Quicken Loans' 20th anniversary party leaned toward tuneful entertainment from the get-go. So for the celebration's main event, it was up to the event producer — Southfield, Mich.-based Star Trax Corporate Events — to track down the best act for the event client's corporate image and the event's attendance demographic.

Star Trax's David Jaffe says his team “threw a lot of names out” to the client, but after much consideration, sizzling hot hip-hop outfit the Black Eyed Peas rose to the top of the wish list. The multi-racial Peas seemed a perfect fit for Quicken Loans' diverse employee group, Jaffe notes, and group's “relatively tame” act was deemed appropriate for the client's “family event,” he says. Then there was the Peas' popular “Let's Get it Started,” the song that was featured in an NBA playoff finals commercial — a pretty nifty event tie-in, as Quicken Loans' chairman just happened to be the new owner of the NBA's Cleveland Cavaliers, and the event was taking place at the team's home venue, the newly named Quicken Loans Arena.

Crediting what he terms “a little bit of foresight and a lot of luck” — that luck hinging on the Peas' availability and the fact that the band had a new album coming out that they needed to promote — Jaffe says the headliners were the right choice for the high-energy event. Not only did the performance meet the client's objectives of establishing a memorable business presence in Cleveland, but with the group's affability and enthusiasm — during a nightclub-themed “after-party,” the Peas came out and danced with the crowd, Jaffe recounts — the band helped lift Quicken Loans' employee spirits into the strato-sphere. He notes that “probably 100” attendees sent e-mails to their employer saying the party was “‘the best night of our lives — this is why we'd do anything for the company.’”

Stressing the advantage of working with experienced talent booking and entertainment professionals, Geoff Thomas, vice president of entertainment for TBA Global Events, says that under the right circumstances, the sky's the limit as far as custom headline entertainment is concerned.

Having provided corporate clients with such high-wattage acts as Aerosmith, Sheryl Crow and Jay Leno, Thomas notes that with extensive understanding of corporate messaging, entertainment production demands and rider negotiation, experts at the Woodland Hills, Calif.-based “inspired brand event” firm can get clients the most impact for their money.

While he's mum on specifics — a nondisclosure policy designed to keep details on the big bucks corporate clients shell out for star-caliber entertainment under wraps prevents him from naming names — Thomas says getting a customized performance is about knowing your act. Some musicians, for instance, are amenable to changing song lyrics to reflect a client, brand or event theme, while others may be willing to provide a full band, a stripped-down performance or an “unplugged” solo acoustic set. “Is it a Christmas party? Do you want Christmas songs? Or covers of certain songs? Does the client love a particular artist, and want a particular set list?” Thomas asks. All options are possible, with the right performer and the right negotiation process, he notes.

Meanwhile, when it comes to headline comedians, “They have to know who they're performing for,” he explains. “If they're going to be making fun of someone in their act, they have to know what the back story is.” Making sure the comedian understands the demographic and political leaning of the audience, and that the client understands whether the performer is “outspoken and political” or is “willing to work ‘clean,’” are also among TBA's duties as an entertainment provider.

Whatever type of headliner the event calls for, “ensuring everybody is on the same page with regard to the client's objectives is crucial,” Thomas says. “We often recommend a conference call or series of calls, prior to the event, with the client, artist and {artist's} representatives.” He adds: “The key to customization is addressing it up front, in the negotiation process, so there are no surprises down the road.”