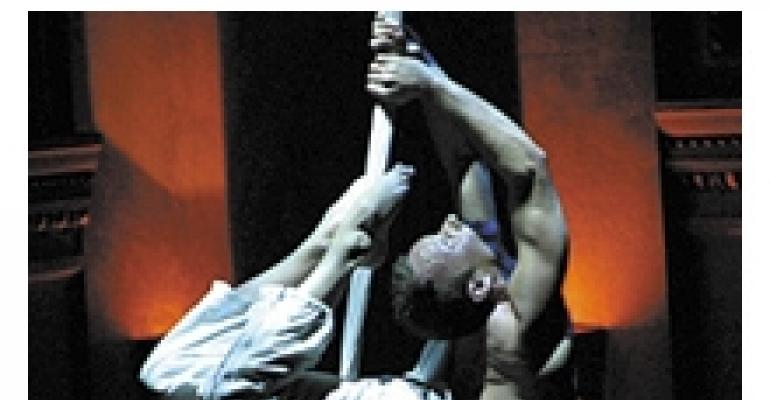 SOARING, scaling, twisting and tumbling — the current crop of hot troupes in event entertainment is motion incarnate. And while they may owe some of their moves to Cirque du Soleil — the landmark company whose blend of atmospheric music and astonishing acrobatics has taken the world by storm — these show folks are turning out client-customized event acts in a class of their own.

Techniques used in event shows may include tumbling, acrobatics and aerial work — all specialties AntiGravity performers have honed during the company's 14 years in business. But no matter what physical feats the company employs in the service of communication, it never veers from its commitment to customization.

Harrison explains: “We never try to do a simple visual example of [a client's] key word. So, when the key idea is ‘speed’” — as it often is for pharmaceutical clients who want to convey the rapid effectiveness of a new medication, he notes — “we're not going to have somebody running across a stage as fast as possible. We want to make it more abstract, more artistic.”

He offers the example of Greek wireless communications company Cosmote, which recently hired AntiGravity to help it launch a new cell phone-based Web service in Greece. With weather forecasts one of the key components the client wanted to stress, Harrison and crew set to choreographing. The show they created started with a performer looking at a cell phone screen, while onstage monitors showed the audience the weather information the user might be seeing. Reacting to a forecast for rain, AntiGravity troupe members launched into a routine of flipping and tumbling, eventually building a large human pyramid topped by a single performer, who suddenly popped open an umbrella. At that moment, gold dust showered down from above, accompanied by stormy sound effects. “We were able to demonstrate that the forecast motivated them to build this pyramid, so they were prepared,” Harrison says.

In order to maintain its commitment to such high-concept custom performances while winning the trust of its ever-growing roster of high-profile clients, AntiGravity takes service, training and safety seriously. In recent years the company has added operations in Las Vegas, Toronto and Orlando, Fla., allowing it to capitalize on local talent and thereby “saving clients money on airfare and hotels,” Harrison notes. The company's 72,000-square-foot training center in Orlando, meanwhile, provides a space for development of new skills and fine-tuning of performance protocols, he adds. Most importantly, “We are proud to say that in our 14-year history, with over 400 custom engagements under our belt, we have an impeccable safety record,” Harrison states. “It's that level of professionalism that has kept us at the top of our field for so many years.”

For Los Angeles-based AiRealistic, whose clients include L.A.'s Museum of Contemporary Art, the Davis World Cup and Cirque du Soleil, creating custom aerial shows is all about having a strong sense of site.

“Everything we do tends to have a site-specific nature to it,” says company founder Gregg Curtis. Along with that, he adds, all his crew members have one thing in common: “We love to fly.”

For AiRealistic, with its roots in extreme rock climbing and its expertise in rigging, going site-specific doesn't mean just taking advantage of a good-size stage or capitalizing on a pretty view.

For the 2004 Taurus World Stunt Awards in L.A., for instance, AiRealistic scaled the soaring structures of Paramount Studios' New York Street lot, performing an act it called “Fire Escape,” “where we run and dance vertically on the wall,” Curtis says. Another entertainment vignette took into account the fact that “we knew we couldn't out-stunt the stuntmen,” he notes. “Instead we decided to ‘punk’ them.” The crew designed a collapsible stage, then staged a scene where performers costumed as security guards rushed out to stop another performer from climbing too high on a truss structure. At a critical moment, the staged “tipped,” spilling the climbing performer out onto fall-breaking fabric, where she danced a duet with one of the guards.

For these events, and all of its engagements, AiRealistic starts by assessing the architecture of the event location to “find out what we're inspired by, what's possible,” Curtis says. “That's where the clients get most interested, and where we can best tailor our work to their needs and desires.”

The biggest selling point for Pompano Beach, Fla.-based Poet Productions is its integrated approach to motion-based event entertainment, according to managing partner Michael McPherson. He notes that the company, with clients ranging from Ford to Pharmacia, is distinguished by its two separate divisions: entertainment content creation and production services.

To explain how the two business areas work seamlessly together in the service of the illusion-, aerial- and acrobatic-based shows for which the company has become renowned during its 15-year history, McPherson cites the example of a recent corporate incentive program.

For the 600-guest event, held over the course of seven days in Maui, Hawaii, Poet Productions choreographed a number of performances, all of which carried through the client's desire to incorporate a color-coding system it had used to categorize groups that had reached different levels of sales achievement. One act incorporated costumed performers from the company's cirque-style Luminaire show, but scaled back the normally high-flying extravaganza to “avoid overshadowing the award winners,” McPherson says. Another evening's entertainment was mainly light-based, with tables turning colors and walls swirling with moving illumination each time a color-coded group's name was called.

Because his company is able to offer both content and full-scale technical services, and because it performs not just customized private entertainment but public theatrical shows, “We were able to build the entertainment like a mini-tour for theaters,” McPherson says. “A lot of times, if you say ‘We need three events,’ you're thinking three audio setups, three color schemes, etc. Here, with a ‘macro’ view of the week, we designed a production flow that allowed us to double the amount of lighting in the client's budget, and reduce other decor and entertainment expenditures.”

The company's interactive and strolling performers — just one aspect of its huge roster of entertainment options — have proven particularly popular among clients seeking to add a feel-good element to the event action. “With wandering characters, the opportunity is created for people to be included in the magic spell of the evening,” says producer and performer Tom Sepe. “The atmosphere is dynamic and participatory, which is a compelling metaphor for the times we are in, as we all pull up our bootstraps and work to create a better world.”

Clients that have caught the vibe include LucasFilms, which brought in Mystic Family stilt-walkers and pyro dancers for a recent holiday party, and the Bioneers Environmental Conference, which hired a 10-person Mystic Family troupe to perform a mix of acrobatics, dance and yogic contortions inspired by the geometry of Buddhist mandala art.

In the business of events since 1999 and a nonprofit organization since 2003, Mystic Family Circus continues to grow rapidly, sourcing new talent regularly through its live monthly salon and its Web site audition calls.

Yet, even at its young age, the group has established some firm convictions. In its work with corporate clients, “We prefer companies that represent earth-friendly products,” says Mystic Family founder and producer Carmenchu Caballero, noting that her troupe performed for client Ford when the automaker launched a series of eco-friendly cars. Looking forward, she says, the company is most interested in bringing its mystically inspired, distinctly physical entertainment to “creative, future-minded [clients] such as computer software, video games, TV networks, and healthy food and drink products.”