/sites/all/themes/penton_subtheme_specialevents/images/logos/footer.png
Recent
Recent
TSE Spotlight: The Hybrid Solution
May 11, 2021
The Magical Ingredient for Virtual Events
May 10, 2021
Who's News in Special Events for May 6, 2021
May 06, 2021
How Non-Fungible Tokens Will be Present at Events and How to Start Applying Them Now
May 04, 2021
Safety with a Side of Whimsy
May 03, 2021 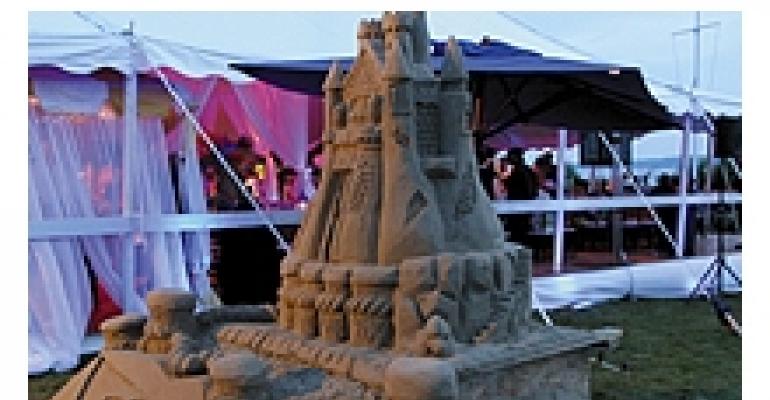 Putting the Fun into Fundraising

You have to spend money to raise money — and no one knows that better than event planners producing fundraisers. When the goal of an event is money for a good cause, a planner has to be extra-careful about expenses, particularly when it comes to potentially costly entertainment. Here, planners share how they created multifaceted, unforgettably entertaining events — while keeping an eye on the bottom line.

Design firm Perfect Surroundings in Newport, R.I., joined Auburndale, Mass.-based entertainment company Siagel Productions to bring the sights and sounds of a southern California beach party to a New England private club. The pair wedded beach-theme decor — including several tons of sand — and entertainment to create “The Beach Ball” for the annual Save the Bay fundraiser in Portsmouth, R.I., in August. The event began with a cocktail hour featuring an a cappella choir greeting nearly 500 guests while character actors and entertainers with unique talents added spice to the scene. “Lifeguards” roamed the event; a semiprofessional volleyball team played an exhibit game; a master Hula Hooper and yo-yo pro lent their skills to the party, while a sand castle sculptor and his team created an 8-foot sand castle right before the eyes of event-goers.A palm reader, airbrush tattoo artist and photo cutout station added interactive fun.

The entertainment continued the festive atmosphere as dinner began. Plasma screens played surfing documentaries and competitions, then a dance troupe clad in “Baywatch” swimsuits and hula skirts performed to '60s surf anthem “Wipe Out” and Beach Boys favorites. Once dinner was over, the band got attendees dancing themselves, and stiltwalkers joined the revelers until the night ended with a fireworks spectacular.

Yet, the entertaining evening didn't come without some tweaks in the original plan. A juggler, living statue and Beach Boys tribute band were nixed to make sure only 16 percent of the budget went to entertainment. But, says Sheralyn Caballero, event coordinator for Siagel Productions, this had little effect on the final product. “The event was very successful nonetheless,” she notes.

When the Washington-based Convention Industry Council partnered with ISES' New England Chapter for August's Hall of Leaders Gala in Boston, the event team kept costs under control by looking to local talent for a close-to-home theme: Boston circa 1880. The 1,000-guest fundraiser, which honored leaders in the event industry, kicked off with a reception that included a string quartet playing Victorian-era music. Next, “butlers” rang chimes signifying dinner was ready while “actors costumed as sprightly wood nymphs silently beckoned guests into the ballroom,” according to ISES New England members Diane M. Fabiano — director of special events at the Institute of Contemporary Art in Boston — and Kevin Wery — designer and owner of Druid Hill Studios in Cambridge, Mass.

To keep guests engaged, planners spiked the entertainment with elements of surprise. On stage, living topiaries swayed to the music, then stepped aside to reveal a violin duet — an act chosen over the more costly option of violin ensembles playing throughout the garden. The awards ceremony featured vignettes with dancing maids and butlers in period dress. And at the end of the ceremony, a Jekyll and Hyde duo took the stage to unveil a surprise montage of images taken during the course of the evening. And perhaps the biggest surprise was the thrifty final tally for talent expenses: $1,000, thanks in part to donated talent, equipment and costumes.

ALL YOU NEED IS LOVE

Las Vegas-based MGM Mirage Events and MGM Grand Productions got attendees to open their hearts, and wallets, with valentine-inspired decor and entertainment for the Power of Love event. The February 2006 fundraiser, a Gala Award nominee, drew 1,000 guests to the MGM Grand Resort in Las Vegas and netted more than $20 million for the Keep Memory Alive Foundation.

The evening blended subtle and showstopping entertainment. “Greeters tipped their top hats and ushered guests down a red carpet entryway while models added a glimmer of eye candy to enviable automobiles on display for auction,” according to King Dahl, executive director of event design at MGM Mirage Events. More models in couture gowns were positioned throughout the event to escort guests to the auction, conducted by “Lifestyles of the Rich and Famous” host Robin Leach. A focal point of the auction room included a “sexy female Cupid, complete with feathered wings, on a rotating velvet chaise, who winked and flirted with patrons at the bar,” Dahl notes. More Cupids dangled from the ceiling, showering guests with rose petals, while other aerialists swung around enormous red lanterns suspended from above. The evening continued with love stories performed through dance, such as ballroom style and salsa, on satellite stages, while headliner songstress Vanessa Williams topped off the evening.

A bit of finesse kept entertainment affordable. Using models, dancers and aerialists employed at clubs in the MGM Grand kept costs at roughly $25,000, and the Keep Memory Alive Foundation paid Vanessa Williams directly in order to stay within budget.

Montreal's April 2006 Daffodil Ball, a Gala Award winner, netted a record-breaking $1,837,318 for the Canadian Cancer Society, in part due to the entertainment. Alison Silcoff — president of Montreal-based Alison Silcoff Events — allotted 18 percent of total ball expenses toward entertainment to go along with her theme: A Venetian Masked Ball. According to Silcoff, it was worth every penny. “The entertainment made the evening,” she notes. It included trumpeters in period dress heralding the arrival of guests — all 660 of them — and volunteer hostesses in lavish headdresses directing attendees. A commedia dell'arte troupe — actors playing traditional Venetian carnival characters — perched on the entrance's staircase provided an interactive element. The cocktail area featured a living fountain, and the band 1945 played current Italian hits as well as classics such as “Volare” as dinner began. Guests dined while masked jesters, jugglers, magicians and mimes provided entertainment tableside.

While different music groups were considered for the headliner entertainment, Silcoff had her heart set on a group of French songstresses: the Goldsingers, a bevy of beauties who have sung for Prince Albert II of Monaco and other royals. Her reason: “Daffodil Ball guests regularly attend all the most prestigious events in the country, and so are somewhat jaded by local talent, however good,” she says. Silcoff's headliner selection proved a good choice because, she notes, even “staid CEOs were enticed to dance.”

THE LATEST AND GREATEST

Tips for Better Engagement on Your Next Virtual Event
Mar 05, 2021