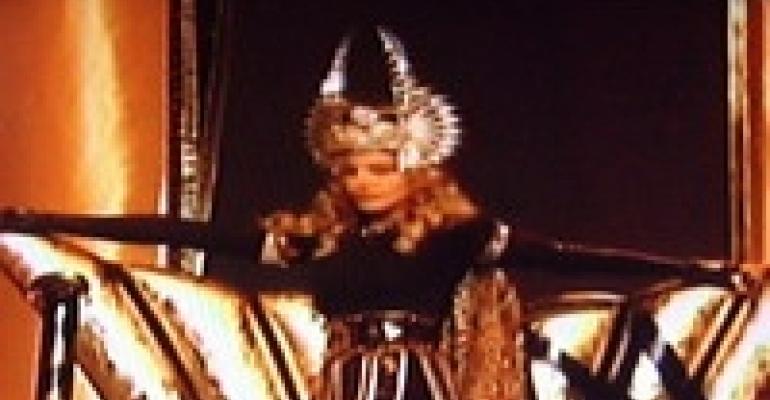 Forget about football. An estimated 114 million viewers tuned in to view the Super Bowl game on Sunday simply to see Madonna's ballyhooed halftime show—and special event entertainment experts watched it all with an educated eye.

Most entertainment experts queried by Special Events praised the segment, which included Madonna's hits "Vogue" and "Like a Prayer" along with the new release "Give Me all Your Luvin." The segment also featured mash-ups with newer acts LMFAO, Nicki Minaj, M.I.A. and Cee Lo Green. The spectacular production opened with Abyssinia-meets-Hollywood set showcasing Madonna and morphed into risers for a sporting event and a choir. The show closed with the words "World Peace" stretching across the stage deck.

Michael Cerbelli of New York-based Go West Cerbelli calls the show, "One of the best I've ever seen—amazing!"

Debbie Meyers, CSEP, of Bravo Entertainment in Dallas agrees. "The technical production was flawless," she says, "and the use of 3D mapping and coordinated LED display on the stage deck was amazing!"

Paul Creighton, CSEP, of T. Skorman Productions of Orlando, Fla., called the staging "a technological marvel" and praised the attention given to both the stadium and TV audiences. "There were several times when Madonna played to the back side of the stage, allowing the other side of the stadium to feel involved," he notes.

A surprise hit segment of the show was the "slack line" act of Andy Lewis, who performed gymnastics on a low, slack rope. "I know our phone will be ringing off the hook," says Sam Trego of San Diego-based Imagination Entertainment. "The great news is, we have this act available."

While many event experts praise 53-year-old Madonna's drive, they note that she is, well, 53.

Trego observes, "I don’t know if it’s because she was nervous because she is middle-aged or if it was those stilettos that she was wearing--probably not the best choice--but there were times when her dancing was a bit 'tentative.'"

Dorene Collier, head of Tampa, Fla.-based Event Show Productions, agrees. "Although I love Madonna and think she looks fabulous, I felt she was trying too hard to be young," Collier says. "Her dancing abilities were strained and it was obvious she was lip-synching."

Trego adds a possible explanation. "Madonna, like many performers who have to move so much, will literally sing over a taped line of her singing," he says. "You can absolutely call it lip-synching, but there is an audible feed of her live singing that the sound man can put into the mix. I will guess that none of the feed made it into the mix at Super Bowl, as with most all performers at Super Bowl."

"I didn’t like that M.I.A. is going to be the story because she couldn’t keep her middle finger where it belongs," Creighton says. "I wonder how upset Madonna is about that?"

"I record and watch the halftime recaps so I can watch--in the background--the staging elements roll out," Meyers says. "It’s a work of art the way that show is orchestrated."

Meyers has favorites from past Super Bowls. "When Shania Twain walked out onto acrylic stage decking over LED video screens in 2003 was the first time I remember seeing that used," she says."Then there is the image of Prince’s silhouette holding his 'logo guitar' against a fluttering silk curtain in 2007. My biggest 'goosebump' in a Super Bowl halftime had to be 2002 with U2, who had a backdrop scrolling the names of the 9/11 victims, and when Bono opened his jacket revealing the American flag—wow! For overall performances, though, Michael Jackson in 1993 was low-tech and demonstrated simplicity at its best, contrasted with Madonna’s complex high-tech performance this year. These are, in my opinion, the two best Super Bowl halftimes--period."

READY FOR THE BIG SHOW

Because Super Bowl halftime is a marquee event worldwide, many entertainment experts would love a crack at producing it themselves.

Producing a Super Bowl halftime "would be a dream gig," Meyers says. "It's not just because of the artists but because I love the logistics of staging entertainment, and Super Bowl has got to be the ultimate challenge."

"For an entertainment producer, the Super Bowl halftime show would be just short of the Holy Grail," Creighton says. However, "To me, the ultimate prize would be an Olympics Opening Ceremony. That’s entertaining the world!"

While Anthony Bollotta of San Diego-based Bollotta Entertainment thinks the halftime show would be an exciting challenge, "I would personally much prefer to produce an Oscar or Tony telecast," he says.

And Ben Russo of Los Angeles-based EMC Bowery has his own personal take. "I've done Lady Gaga's VMA dinner, Monique's Oscar luncheon, the Rolling Stone VMA party, etc., so I've done a lot," Russo says. "But the one thing I've always wanted to do is Elton John's Oscar party. His party is iconic--you can't get much better than that."