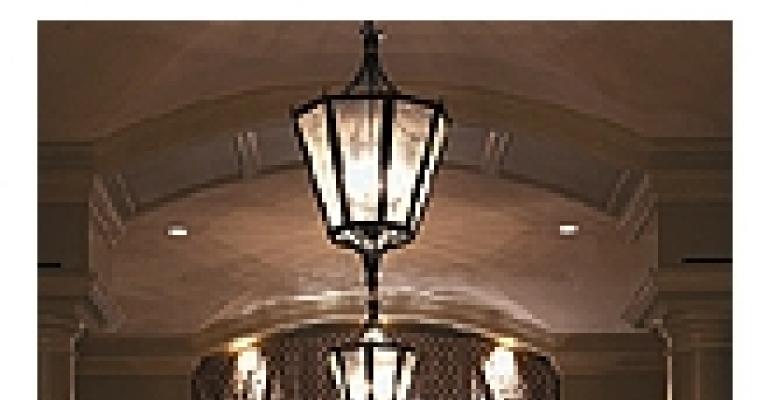 EVENTS are big business at city and country clubs, but to keep up with the high-tech demands of members and competition from other venues, clubs feel the pressure to upgrade their technological capabilities. From adding state-of-the-art audiovisual equipment to using room-diagramming software to showcase function spaces, tech-savvy club management is revving up revenue and increasing staff efficiency for club events.

IF YOU BUILD IT …

When the Prestonwood Country Club in Cary, N.C., found its event space too cramped for the needs of its growing membership, the club made the decision to build a 36,000-square-foot addition specifically for weddings and other events, including a ballroom and 12-seat conference room. And while they were at it, club owners decided to meet the demand for increasingly high-tech events by complementing the ballroom's elegant architecture with state-of-the-art audio-visual equipment. “Private events are extremely important and allow Prestonwood to maintain preferential pricing structures for its members,” says Bill Boyd, the club's team leader for membership marketing and food and beverage. He notes that revenue from special events contributes more than 50 percent of the club's total food and beverage sales.

The 6,400-square-foot Grand Ballroom, which opened last year, gives the club a beautiful new event room that can seat 500 guests for dinner. But the real boon for events is the extensive array of audiovisual equipment installed in the space. The addition of video teleconferencing capabilities and Internet uplinks for events allow people in remote locations to “log on around the world and see events in real time in the ballroom,” Boyd explains. Four 12-foot-wide projection screens and four high-output LCD projectors retract into the ceiling, a feature that keeps them out of sight when they aren't needed. “We went to a lot of trouble to hide all of the equipment,” he says.

Another top technological feature in the ballroom is the heavy-duty concert-quality sound system hidden inside the walls, which includes Klipsch full-range and JBL subwoofer systems driven by a Mackie mixing board. “This allows bands and DJs to plug into the house system without having to bring in heavy, damaging equipment,” Boyd says. Plus, “our system is higher quality than what many of {the musicians} have.”

Prestonwood tuned its members into the new facility's capabilities through announcements in the club's newsletter and marketing brochures, as well as on its Web site. The investment has paid off: The addition of the ballroom has resulted in an additional $1 million in sales in the first year, and the club expects to pull in another $4 million within five years, Boyd says.

Thanks to its location downtown Chicago, it's no surprise that business events are big business at the Mid-America Club. The business and social dining club, located on the 80th floor of the city's landmark Aon Center building, hosts more than 1,000 private events a year, which account for 65 percent of the club's annual revenue, notes general manager Nicole Quaisser. Event spaces, which include conference rooms and the 8,500-square-foot Burnham Ballroom, offer 360-degree views of the Windy City and Lake Michigan while accommodating events of 50 to 1,000 guests.

To lure business meetings from conference centers and hotels to its rooms, the club has created its own high-tech enclave by offering free wireless Internet service throughout the space and installing additional antennas on the roof of the Aon Center to improve reception for BlackBerrys and cell phones.

To improve the event planning process, the club has installed a new accounting software system that allows planners to update accounts on the spot, which means “guests can walk out with an updated invoice when small or large changes are made to their event,” Quaisser says. Using the software program means that the club “has been able to reduce the amount of planning time required for events, has streamlined the billing process and, most importantly, has created a simpler, more efficient process for guests.” The improved technology has resulted in a higher volume of meetings and events, as well as “an overwhelmingly positive reaction from members and guests,” she adds.

The club, which is also a popular site for wedding receptions, is currently finalizing an agreement with Eved, a Web-based event services system that allows potential clients to view decor items such as linen, tableware and centerpieces before deciding to book the venue. “This will make the planning process faster and easier and eliminates the time needed to gather samples,” freeing up her staff's time, Quaisser notes.

For the Gleneagles Country Club in Plano, Texas, a member of the ClubCorp family of city and country clubs, the addition of room-diagramming software has added to the club's bottom line. “Although we weren't having a problem with the way we were doing things before, I kept telling management that we needed to keep up because so many other people are using {such programs},” explains Joanelle Loya, private events director.

Rather than lose business to competing venues, three months ago the club installed Digital E-plans, a program used by several of Gleneagles' sister clubs. A representative of Digital E-plans visited the club to measure the event areas and take inventory of the club's audiovisual equipment and banquet items such as tables and chairs, then entered the data into the program. Now, “I just open up a file, and I can customize a room for the event I'm working on — {the program} has all of our rooms and equipment in a library,” Loya says. The program also allows her to save floor plans she's made for previous events, creating a reference she can access in the future.

The club saw immediate benefits from the software. A week after it was installed, Loya used it to win the business of a client looking for a large function space, but who assumed the club's event areas didn't offer enough square footage. “It was a $32,000 party that we didn't want to lose. But using the software, I was able to pull up our space and show the client that the square footage he would have here was more than what he would have at another venue he was considering,” Loya recounts. “Plus, the proposal we gave him looked so much nicer than what he received from the other venue. It made us more competitive right off the bat.”

Gleneagles has plans to add room diagrams it has developed using the software to its Web site for prospective clients to view. “They'll be able to get a better idea of the room setup, which is so important,” Loya notes. “People want to be able to see things online before they take the time out of their busy schedules to come see the site in person.”

While it has not yet added a room-diagramming program to its technology repertoire, Hiddenbrooke Golf Club in Vallejo, Calif., is using the power of event management software to keep events organized once they've been booked. The club, which derives the majority of its food and beverage revenue from functions such as weddings and fund-raisers, uses ReServe software from ReServe Interactive to organize its event bookings. The software “not only helps us to prevent double-booking a space, but it manages all of our functions for events — we can add in the food and beverage and the time lines, print out different calendars, or bring up specific events for reference,” explains Jill Sandy, the club's events coordinator. “It definitely creates greater organization for both our staff and our clients — it's not just a chicken-scratch sketch on the back of a BEO {banquet event order}. It's printed out, and it clearly tells us exactly what needs to be done.”

As for investing in room-diagramming software for the club, “I think it's a necessary step we need to take because our space is so unique,” Sandy says. The club's indoor event space is made up of five adjoining rooms with a capacity of 250 for seated dinners. “I've been looking into several programs, and what the technology offers is a total convenience factor — it gives you the specific measurements of the room and helps decode what size tables you can use and how many can fit, which can affect an event's guest count,” she notes.