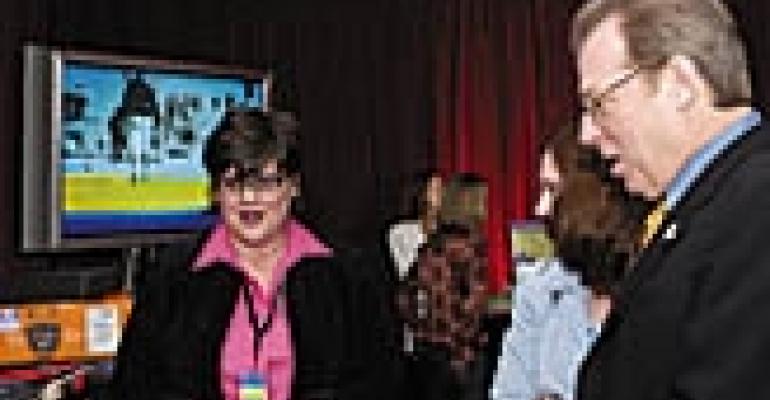 ATTENDING AN AWARDS show is fun — the red carpet, the after-parties — but it's even better when there are goodies involved. That's the premise behind the gifting trend that has been an awards show staple for several years now. Yet what really gets VIPs excited is the chance to customize their own gift baskets by “shopping” for personalized products in a gift lounge, notes Samantha Milo Haft, president of New York-based event production company On 3 Productions.

For the star-studded IFP Independent Spirit Awards, held Feb. 28 on the Santa Monica [Calif.] Pier, client IFP/Los Angeles hired On 3 to produce the presenters' gift baskets and gift lounge. Although On 3 created gift baskets for the 2003 awards, this year IFP wanted to expand the offerings to capitalize on the gift lounge trend. “It definitely has become a critical component,” Haft explains. “It's a way for the organizations that are producing the awards shows to say thank you to the celebrities who come out and donate their time to these events.”

The 2004 awards were attended by the A-list of the independent film world, including Naomi Watts and Hilary Swank — “a lot of the same people who then walked the red carpet at the Oscars the next day,” Haft notes. It's that kind of mega-watt star power that attracted companies such as Ray-Ban, which Haft says has been “a supporter of independent film for years,” as sponsors for the gift lounge.

Each of the 10 sponsoring companies was given a station in the lounge, which was simply decorated with burgundy velvet drapery — reminiscent of the curtains in old movie theaters — and high-top cocktail tables and chairs. As the stars passed through, sponsor-company representatives helped them pick and choose from a buffet of hip gifts. As a result, Haft says, “It just [became] more personalized for both the celebrity and the companies who provided the products.” As for the celebrities' reactions to the shopping spree, “You don't get a sense of entitlement,” she explains. “You get a sense from them of real appreciation and excitement.”

By the close of the evening, some 65 VIPs had shopped their way through the lounge, walking away with such treats as chic Chip & Pepper jeans, an annual pass to Loews movie theaters and a TiVo DVR system — products that tied into the event's laid-back, cinematic theme, Haft says.

While gift lounges have been a staple of awards shows for several years, Haft notes that she is now seeing the trend trickle down to other events, such as those given by some of her company's nonprofit clients, with the proceeds from the sponsors often going back to the charity. “Three or four years ago, [there were] far fewer companies that understood the value of this type of product placement as a marketing strategy,” she explains. “But today, those companies call us.”