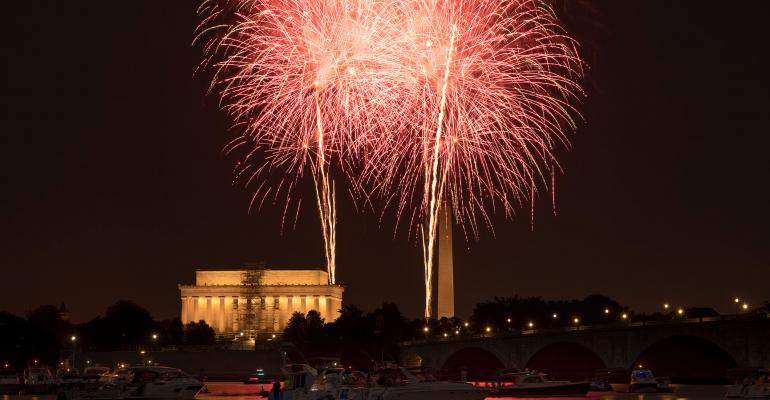 Oh Say Can You See What’s Going On? D.C. in the Dark about July 4 Celebration Plans

Plans for the Independence Day celebration in the U.S. capital are a mystery--and it's only three weeks away.

The United States will celebrate Independence Day in Washington on July 4—that’s for sure. But that is all that is sure about this year’s festivities, thanks in part to mixed messages from the White House. Although the White House and the National Park Service, which is primarily responsible for the event, usually start planning together three months out, it’s unclear if any such meetings have been held yet, according to a report in the Associated Press:

With three weeks to go, exactly what’s going to happen in Washington on the Fourth of July remains a subject of intense confusion because of President Trump’s plans to reshape the nation’s premier celebration.

Will Independence Day festivities be centered around the Washington Monument or shift to the Lincoln Memorial, as the White House has reportedly requested? Will Trump follow through on his plans to give a speech? And, if he does, will the speech be open to anyone, including protesters, or will the White House restrict his audience to supporters at the traditionally nonpolitical event?

The White House hasn’t revealed its plans. The National Park Service, which is primarily responsible for the event, also has gone silent. That leaves the city government, which helps with security, in the dark.

Eleanor Holmes Norton, the District of Columbia’s representative in Congress, said interdepartmental planning meetings for July 4 usually begin up to three months in advance. But to her knowledge, none of those meetings has happened.

“The city is scrambling to figure out what to do, because all they have is the outline of what [the White House] wants,” Norton said. She said she approached the park service for details but “they wouldn’t tell us a thing. You know why? Because they don’t know a thing.”