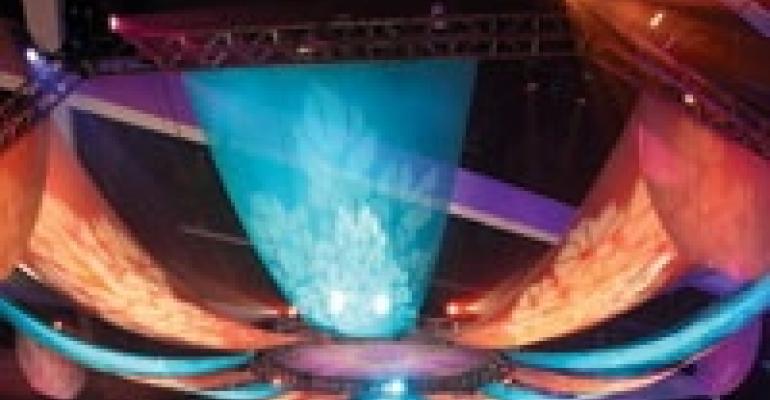 When it comes to the National Academy of Recording Arts and Sciences' annual Grammy Awards after-party, event producer Along Came Mary has an ace up its sleeve — its long-standing relationship with the academy. “We know them really well and they know us,” says producer Beth Norber of the Los Angeles-based event firm founded by industry icon Mary Micucci. “That trust allows us to take risks we know the client will enjoy and appreciate.”

This year, when the Academy asked for a '60s theme to celebrate the 40th anniversary of the seminal Woodstock music festival, Along Came Mary used its creative license — and the best in modern technology — to immerse the event's guests in the spirit of the era.

Any event with a guest list nearing 6,000, which includes the music industry's biggest stars, is bound to have its design and production challenges. For this year's party, the most daunting of these was what the Along Came Mary staff refers to in hushed tones as “the turnover.”

As Norber explains, the Los Angeles Convention Center exhibit hall where the celebration is held is also the location of the Grammys' pre-telecast event, when the majority of Grammy winners are announced. From 1 to 4 p.m. on event day, the room was set theater-style for an audience of 3,000, while rigging equipment — put in place before the event — remained unnoticed overhead. As soon as the ceremony ended, Along Came Mary and its vendor team had until 8 p.m. to transform the space into a multi-vignette homage to the era of free love, flower power and anti-war sentiment — all wrapped up in spectacular Hollywood style, of course.

Placing the room's combination of 66-inch seating rounds and 8-, 12- and 16-foot buffets was the most difficult part of the four-hour metamorphosis. “You can do all the floor plans you want,” Norber says, “but how it ends up when you're actually placing them — is there really enough walkway space, etc.? — that's one of the hardest elements.”

Other major installation components included a 20-foot-diameter peace sign constructed of truss covered in sheer fabric and illuminated, and a custom-built 40-by-50-foot LED ceiling positioned in the center of the 102,000-square-foot exhibit hall. The showy ceiling — programmed to change images throughout the evening from the American flag to peace symbol to abstract psychedelia — not only served as a dramatic focal point but also reined in the massive space. It had a “huge impact,” Norber recounts.

Event night saw guest flow managed with the same degree of efficiency as the intensive installation. On the other hand, the high spirits of guests were allowed to run their own groovy course.

Staff from adjacent sports-venue Staples Center, where the Grammy telecast is staged, funneled guests through a series of three security checkpoints into the convention center. At 8:15 p.m. on the dot, partygoers “were greeted by our ambient entertainment, the pulsating sounds of the DJ and sumptuous bars and buffets,” Norber notes.

The evening's lineup, which included performance artists and aerialists from the Lucent Dossier Experience, enriched the visual impact of the space. “I always consider them a huge decor element in our room,” Norber says. And in a true blast from the past, performers included cast members of the current Broadway revival of 1968 rock musical “Hair.” “They really hit home the theme,” she adds. “And how much fun is it to have 30 dancing hippies infiltrate your event and really act as part of the decor?”

While the evening's design and entertainment were a throwback to the '60s, the dining options, prepared by Wolfgang Puck Catering, were a wholly contemporary mix of international favorites, including Chinese chicken salad, slow-braised Latin short ribs and quintessentially American prime rib and banana cream pie.

As modern as the menu was the event's eco-conscious production approach. As Norber notes, “Along Came Mary is always looking for ways to ‘green’ this event, as that is such an important initiative for our client.” Examples included the client's hiring of nationwide trash removal and recycling firm Waste Management — the com-pany exchanged sponsorship for a decidedly un-trashy lounge area at the celebrity bash — which provided indoor recycling bins, outdoor dumpsters and transportation for bar product. Additional shades of green came from hundreds of energy-saving LED fixtures and 100,000 square feet of eco-friendly carpet.

For Along Came Mary's Micucci, this year's Grammy celebration held special significance. “This event was such a joy for me to be a part of,” explains the veteran event guru. “It always is every year, but it was especially meaningful to me because the '60s was my era. That's when I grew up, so to see Woodstock still having an influence, an impact on people — that's really special.”

Mary Micucci of Along Came Mary Has the Last Word