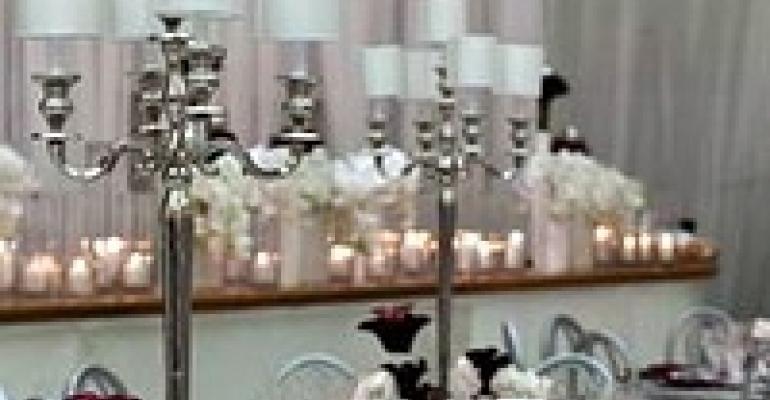 Blueprint Studios Keeps a Ballet Gala on its Toes

While being a “name” in the event biz has its perks, celebrity also can be a liability. Paul Moss of San Francisco-based Blueprint Studios says it's precisely the fact that his firm is a broad-based collective — rather than an “ego in an office, farming everything out” — that gave the San Francisco Ballet confidence in Blueprint's abilities to produce its 2010 opening gala in January: a first-time event for the company. Once Blueprint had bonded with the ballet, though, it still had to charm organized labor.

While the firm welcomed its artistic freedom, it also recognized inherent risks in the pristine palette. “Silver and white can scream ‘wedding’ or it can scream ‘winter ball,’” Moss notes. “This wasn't the holidays, and it was not a winter ball.”

To avoid potential theme pitfalls, the Blueprint team added a touch of color, as suggested by Tomasson. “He had a color in his head he was trying to express,” Moss recounts. “He wanted us to take a glass of red wine and look at it through the light to see the color you get.” Needless to say, “We started drinking lots of wine,” adds Mircea Manea, Blueprint principal, who teams with Moss and a third partner, Francisco Recabarren.

The ineffable hue — commonly called “pomegranate,” as it turns out — turned up in imported Kenyan calla lilies, which were set atop platinum crinkle-silk taffeta linen in hammered aluminum and mirrored vessels as centerpieces on dining tables in the rotunda of San Francisco's beaux-arts City Hall building.

Working with three separate donor-level sections, and sensitive to the need for a balance between exclusivity and equality — “We did not want people sitting in the same room seeing someone sitting across somewhere that looked better,” Moss says — Blueprint subtly altered each different area. In the top donor-level section, for instance, centerpieces included 4½-foot-tall crystal candelabra, manufactured in Italy, while a lower-donor-level section featured striking silver candelabra with chic white shades. Seating, too, provided an opportunity for subtle distinctions: In the top-donor section, guests sat in Ghost chairs — but with a twist. “There's always a comfort issue with Ghost chairs,” Moss says. To solve the problem, “We had hand-sewn silk seating pads with crystal-studded backings,” which added sparkle while providing a soft landing. Meanwhile, guests who had given a little less sat at Blueprint's new Infiniti chairs — a debut for the firm's in-house-designed chairs, which Moss predicts will help usher out the tried-and-true chiavaris of yore.

This being a ballet gala, more fun was still to come post-performance — which meant yet another chance for Blueprint to show off its design and production chops.

Pulling the entire space together, overhead fiber-optic chandeliers changed colors, and intense lighting in shades of purple and magenta — courtesy of lighting and AV-vendor Got Light — created an atmosphere that was “high energy, with everything bolder” than it had been at the elegant, formal dinner, Manea adds.

While elements such as those 16 custom-made, circular, fiber-optic chandeliers certainly awed the crowd and won praise from the gala planning committee, they did come at a price — and not just a monetary one.

In order to get the best out of the union crew required to rig the chandeliers and to install other elements of the elaborate event, Blueprint made the smart decision to create one master labor production schedule with Got Light, “looking at the entire job as a whole, rather than piecemeal union calls,” Moss says. The move helped ensure a “flawless” install, he notes.

Just as important, Blueprint and its vendors had to put “perfect world” preferences aside. In any event environment where government agencies, public concerns and union labor are involved, “You need to respect the system and learn to work within it,” Moss says. “Being confrontational or setting up in your mind in advance that the union crew or the labor pool that isn't yours on a regular basis is going to fail you is going to ensure it does exactly that.”

Instead, the smart producer always maintains a positive relationship with labor; Moss says, “Respect on both sides is going to get the job done.”