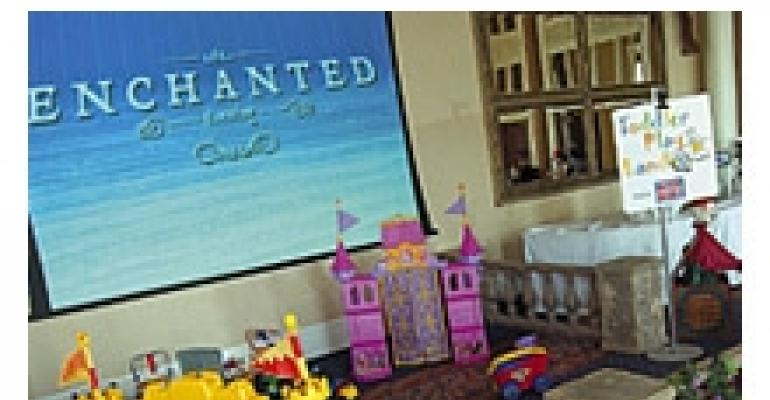 WHEN Toronto's SickKids Foundation first approached event planner Hala Bissada, it delivered a clear mandate: “Come up with an event that's family-oriented, caters to our donors, involves children and is executed in keeping with our reputation for excellence,” she recounts. Bissada responded with “An Enchanted Evening,” a fundraising event that offered an intriguing study in blending black-tie elegance with fun-for-the-whole-family festivities. Her second run of the event is nominated for a 2006 Best Fundraising Event Gala Award and offers a useful lesson in how Bissada learned from her experience with the inaugural bash.

A former SickKids Foundation in-house event pro and now president of Toronto-based Hala Events & Communications, Bissada says planning the April event for her former employer was a unique challenge. “They wanted turnkey service from concept and sponsorship to marketing and production,” she explains.

Full service started with the event's thematic design. In keeping with the fairy-tale theme of the 2005 event, Bissada set her sights on enduring Disney classic “Snow White and the Seven Dwarfs” for the 2006 event. To apply the theme to the gala's staged entertainment, the planner brought in a professional scriptwriter, who updated the story for a contemporary audience — transforming the “wicked stepmother” into a fading former beauty queen, for instance. Other tweaks included incorporating sponsor products, such as the Bell Mobility cell phone used by a technologically savvy Snow White.

It wasn't just the Snow White theme that got an update at “An Enchanted Evening” '06. On the production side, Bissada revised event components based on difficulties she encountered with the 2005 gala. For one thing, she eliminated Annie, an “animated host” featured at the original event. While the children had loved the animated image, which interacted in real time with a live co-host, Bissada says the animation suffered from problems with lip-sync timing and other technical elements. Since the animation's creators lacked sufficient time to work out all the kinks for the 2006 event, the planner opted to drop the feature entirely rather than include it in a less-than-perfect form.

Learning from 2005, Bissada also changed the gala's hours, shifting the event to a more bedtime-friendly Sunday afternoon rather than the Saturday evening of the previous year's party. The change from a high-demand Saturday night to a lower-demand Sunday also meant a reduced venue rental cost — a significant plus for the charity event, Bissada notes.

Along with the schedule switch, Bissada amended the children's menu. In 2005, she says, “We tried to make it too healthy.” For 2006, “We realized this is a treat evening for the kids” as well as their parents. So while the adults enjoyed a dinner of chicken breast, steak and risotto, the 2006 event's younger guests feasted on favorites including mini burgers and fries.

Essential to creating a successful 2006 event was not just learning from the past but making sure the present was family-friendly in every possible way.

From the moment guests first arrived at the Toronto Exhibition Grounds' Queen Elizabeth Theatre for the entertainment segment of the event, they were met with measures to ensure their security and enjoyment. Along with a stroller check-in area, security bands and a parent-paging system, the event site featured thoughtful extras such as baby-changing stations in both men's and women's restrooms.

After the show, when it was time for the event's 800 guests to move from the theater to the Exhibition Grounds' Liberty Grand venue — site of the gala dinner and interactive entertainment — they were led on the six-minute trek with an “Enchanted Parade” accompanied by the Scarborough Pipe Band and Bugle Corps. Those who were unable or disinclined to march had the option of taking the “Enchanted Express” — a theme-decorated bus.

Bissada also worked to make mealtime a pleasure for guests. Thanks to the efforts of her team, the Liberty Grand's in-house catering crew knew which guests required high chairs, booster seats, bibs and other child-dining accoutrements, and they preset the tables accordingly.

To occupy attention spans short and long post-meal, Bissada provided interactive diversions from more than 30 “activity partners.” Stations included clay art, family portraits and make-your-own music CDs. According to Bissada, kids loved it all, but went especially crazy for the “bear clinic,” where, she says, “SickKids staff took X-rays of teddy bears and treated anything from a scratch to a broken leg.”

While she notes her gratification at being able to do good for an organization “very near to my heart,” Bissada says the experience also provided an important lesson in what not to do for future fundraisers.

“Sponsorship was very difficult,” she states. “By the time [SickKids Foundation] let me go and start on sponsorships, it was January — for an April event. Usually I would start a year in advance, because I want to get into [potential sponsors'] fiscal schedules.”

While Bissada's team managed to rack up an impressive $406,000 in sponsorship dollars for the event, the planner insists she won't work under that kind of time crunch again. “It took years off my life,” she says. “Now I say to every client, ‘I can't do it if I have that kind of timeline.’”

FOR ‘PRINCES AND PRINCESSES’

FOR ‘KINGS AND QUEENS’