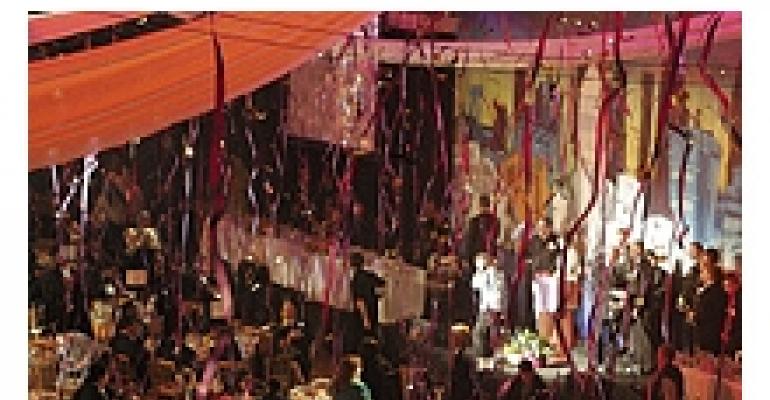 WHEN Los Angeles' Central City Association planned to host its 11th annual Treasures of Los Angeles luncheon to honor outstanding Angelenos, it turned to Simply Mumtaz Events for production expertise. And when the barely-a-year-old L.A.-based company needed to overcome last-minute setup restrictions and on-site production surprises at the April event, it turned to its considerable powers of negotiation and technical know-how.

“With a limited budget, we needed to find that one piece of decor that would make the hall inviting and awe-inspiring,” she says. “Our saving grace was the three existing chandeliers.”

According to the producer, the Simply Mumtaz team was originally told it could “hang anything” from the fixtures — and it responded by planning its entire seating, lighting and audiovisual plans around them.

Then, barely a month out from the event date, the Shrine's management put the kibosh on the plans. Hopkins attributes the sudden shift to a miscommunication triggered by the venue's focus on upcoming Grammy and Emmy events during the five-month lead time for the Treasures luncheon. “They never really heard what we were saying because they were just so busy with other events,” she surmises, adding that the venue “kept saying we could finalize details later.”

But, as event pros know all too well, the devil is often in those details, and the case of Treasures was no different. By painstakingly negotiating a switch to hanging aircraft cable directly above the chandeliers as an alternate suspension option, the Simply Mumtaz crew thought it had solved its problems, Hopkins recounts. But on the day before the event, the team arrived at the Shrine to discover that, due to an apparent internal labor conflict at the venue, no cables had been hung, throwing the already-tight 12-hour load-in into crisis mode.

Again, swift, smart negotiating saved the day, yielding the promise of an extra 10 hours of load-in time, plus a little bit of help from site janitorial staff. In retrospect, Hopkins says, “We should have checked in with the venue [the day before load-in] — not with a phone call, but a visit to the Shrine.” Fortunately, despite the difficulties, a little help from the venue's tenacious administrative assistant helped ensure setup could proceed without further hitches, she adds.

Devilish details continued day-of. For starters, there was the L.A. City Council member who was scheduled to present introductions after lunch — and showed up 10 minutes late. “We had everything planned to the last minute, and Treasures always ends up being a crunch to honor 10 separate honorees in an hour and a half along with serving lunch,” Hopkins says. “We allowed for a five-minute delay, but not 10.” So, what to do? The team radioed the president of the Central City Association for approval to skip a break originally scheduled to allow catering staff to pick up entrees and serve coffee. “We got it. I radioed the technical crew: ‘No break, no break, no break!’” And off the team went, without a pause, into the award presentation portion of the show, following the “Springtime in Italy” themed lunch of Pernod-marinated beef tenderloin and skewered rosemary shrimp.

Still, the surprises were far from finished. When renowned 95-year-old photographer and Treasures honoree Julius Shulman arrived at the podium to receive his award, he began holding up photographs, apparently unaware that the 1,400-plus audience would not be able to see them. Simply Mumtaz's quick-thinking stage manager “politely grabbed a photo, called over our floor cameraman, focused in on the photo, and voila! The photo appeared for everyone to see” on large-screen monitors, Hopkins says. “It ended up being one of the most heartfelt moments of the program. Sometimes, those spontaneous moments are the ones that stay with you.”

With a civic event's typically limited budget and lack of honorariums or amenities for guests, Treasures is always a difficult project, Hopkins says. But it's also a profoundly gratifying one for the producer. “As our emcee [actor] Dick Van Dyke closed the program and the theme song ‘I Love L.A.’ sounded, the streamer cannons went off, and I got to see people's faces turn into expressions of awe, inspiration and accomplishment,” she recounts.

A big part of the reason for that satisfaction on the part of guests? “The way we set up the floor plan,” Hopkins notes. “The stage was especially long — 60 feet — and only 8 feet wide. We made the room only five rows of tables deep, so no one was more than five tables from the stage. People really enjoyed feeling involved whether they were at a $15,000 or $3,500 table.”