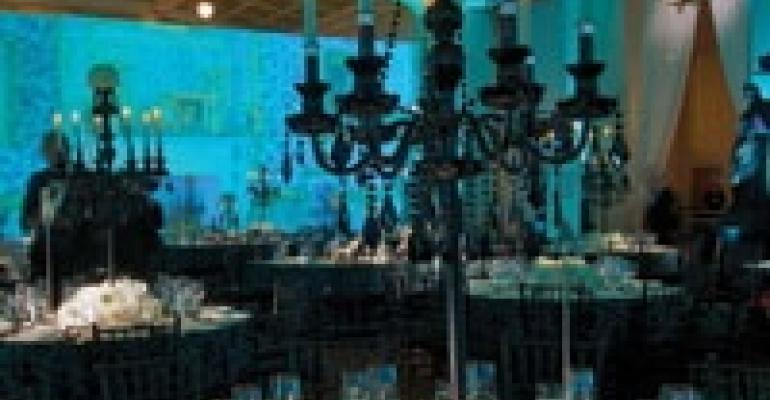 Ballerinas routinely wow audiences with their pirouettes, but San Francisco-based Ideas, The Special Event Co., showed some fancy foot-work itself for the San Francisco Ballet's January opening-night gala. Just two weeks before the gala, the event crew combined fundraisers for the San Francisco Auxiliary and the young professional group Encore into one in order to hit the 1,000 guest benchmark. The result was the elegant yet cost-effective “Russian Treasures” event at City Hall.

Ideas began planning the event in August, when the economy appeared on stronger footing. But by December, the com-pany had to consider the tanking economy to keep the gala afloat. So the team opted to create an event that was elegant but not excessive. No easy task “when the theme inherently calls for opulence fit for Czarist Russia,” notes Jennie Allen, Ideas' director of marketing.

The team turned to its inventory, painting and reupholstering items to pare down spending. In fact, after reworking the pieces, “We found that we liked them better,” says Riccardo Benavides, creative director and founder of Ideas.

Also important to the Russian theme: “Steering clear of ostentatious cliches,” Allen notes. So no giant red props or over-the-top sprays of red roses. Instead, the team went for what Allen describes as “Mafia chic” in one area of the fundraiser. Decor had a rebellious feel with turquoise lighting and patterned linen set off by black lacquer pieces.

However, traditional Russian decor didn't go the way of the czar. Ideas simply tweaked it with such touches as a toned-down color palette of mustard and raspberry, instead of predictable gold and red. Vases looked like candlesticks but with rounded, egg-like ripples that made a nod to Faberge eggs. Four 8-foot-tall mirrors with faux etchings of Russian eagles added an imperial touch.

In the end, Ideas choreographed its own seamless dance. The team brought different donor groups together, Allen says, “in order to support the ballet during a time when arts organizations need the most support.”

Successful Fundraising in a Tight Economy