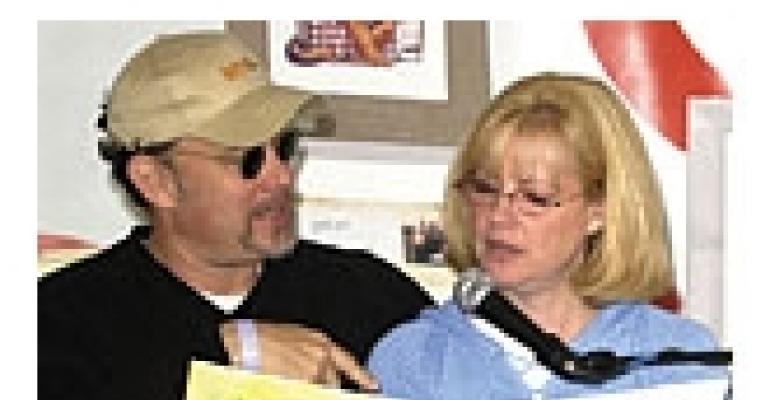 ANY charity event can offer good food, good drink and something nice to watch. But it's those benefit fêtes that give guests access to opportunities they wouldn't find anywhere else that are raising the bar in the fund-raising game.

Currently in its 16th year, the Elizabeth Glaser Pediatric AIDS Foundation's annual celebrity carnival manages to combine star power with child's play in what has become one of Los Angeles' premier charity events. And while the formula has served the event well, success doesn't mean changes aren't part of each year's plan.

One of the carnival's most recent updates was last year's move from media mogul Ken Roberts' estate in the tony Brentwood neighborhood, where the event was held for more than a decade, to the sprawling grounds of the nearby Wadsworth Theatre. While the move has allowed the carnival to accommodate a crowd that has swelled to nearly 2,000 attendees since its modest beginnings, according to Glaser Foundation director of development for events Philip Dufour, it has also challenged organizers to maintain the event's low-key, high-fun vibe. “The thing we pride ourselves on and have to make sure we never lose is the feeling of a family carnival and picnic, something so much fun {attendees} won't forget it,” he says.

Help has come, he notes, in the form of sponsorship packages, which account for about 75 percent of event proceeds. Examples include Los Angeles bakery Clementine's, which recently sponsored a cupcake-decorating booth, and Mercedes-Benz, which has underwritten a kid-friendly fashion show. The event also enjoys a “huge number” of in-kind donations from L.A. food fixtures such as Pink's hot dogs. Then there is title sponsor-retail giant Target — which came on board five years ago, not just lending its name to the festivities — the carnival now goes by the moniker Target A Time for Heroes — but hosting activities including Xtreme Games with skateboarding legend Tony Hawk.

The carnival's biggest draw, of course, is the once-in-a-lifetime chance it offers ticket-holders to mingle with Hollywood's biggest names. Superstars the likes of Jack Nicholson, Dustin Hoffman and Tom Hanks have participated, lending their talents to storytelling, dunk tanks and human bowling.

According to Dufour, getting the stars to come out has never been a problem. “When asked why they're here, many celebrities will say, ‘I knew {late foundation founder} Elizabeth Glaser. I told her I would always support the cause,’” he says. Good press doesn't hurt either: “Our staff often gets calls from publicists and agents each year asking when the event is happening,” he adds.

In the end, though, it's not about the celebs, but about the cause célebre. “Everything is underwritten,” explains Dufour, noting that this year's event raised $1.4 million, 100 percent of which will benefit the foundation's lifesaving programs.

Nobody loves a sneak peek at new cars more than car buffs. Such was the thinking behind the first First Look for Charity benefit, hosted 13 years ago to coincide with the Chicago Auto Show.

That's where teamwork comes in. Nine-year-veteran Erik Higgins, First Look general manager, explains that each local charity that benefits from the event is responsible for its own ticket sales.

As for entertainment, the cars themselves are the showstoppers. But exhibiting auto-makers are welcome to book anything from headline crooners to low-key jazz combos for their booth — anything to entice attendees and enhance the festive feel.

Then there are the nearly 600 Chicago-area car dealers who make up the Chicago Automobile Trade Association — the show's hosting organization. Calling the dealers “a benevolent lot,” Higgins notes “they recognize that the largest auto show in North America is an unmatched venue for attracting charity supporters.” The dealers' big contribution is to pick up the tab for major marketing, touting the event in media outlets such as the Chicago Tribune with ads geared toward “people who want to see the auto show amid an ambience unmatched during the show's 10-day run.”

That leaves Higgins and his team free to handle food and beverage — think 420 cases of beer and 3,000 pounds of shrimp for this year's event, just for starters. With much of the munchies donated, Higgins is able to keep expenses to a minimum. And with the network of charities, manufacturers and dealers contributing their efforts to the cause, that means needy groups such as the Alzheimer's Association, the Boys and Girls Clubs of Chicago, and Chicago's Children's Memorial Hospital “keep almost all of what they raise by selling admission tickets,” Higgins says.

A vintage fund-raiser at 25, the Napa Valley Wine Auction has raised more than $50 million for local charities by harnessing the allure of Napa Valley, Calif.'S legendary wines. How has the event managed to pull dedicated crowds of attendees to Napa's Meadowbrook Resort year after year without the aid of advertising? By giving wine lovers something they can't get elsewhere — a chance to compete with peers to get their hands on fine, rare and unique Napa pours, says Stacey Dolan Capitani, the auction's managing director of marketing and promotion.

The key to getting the event's 1,500 to 2,000 guests to give lies in giving them a variety of auction options over the four-day event, each suited to different bidding styles, Capitani explains. Bidders with a taste for drama can try their luck in the Dutch-style barrel auction, where participants raise the stakes exponentially on barrels of wine from more than 100 Napa vintners. Techies, on the other hand, might prefer the recently added e-auction, where bids are placed through touch-screen kiosks, and updates appear on large screens located throughout the event grounds.

Hundreds of hospitality events and plenty of tastings bring a celebratory mood to the proceedings, Capitani says. And last year's decision to make tickets for Friday festivities available at a deep discount to members of the local community — many of whom felt shut out by past years' events — has increased the event's feel-good vibe even more, she notes.

Also helping improve atmosphere and add to the bottom line have been the recent addition of cash sponsors along with in-kind donors, and a switch from the event's traditional 1,500-guest black-tie gala (“Too noisy, and foodservice was a challenge,” Capitani says) to this year's dinner featuring 10 individual tents housing 10 wineries working with esteemed local chefs.

These changes and others that address the complaints, concerns and general ho-humness that inevitably crop up at an annual event as long-standing, targeted and intimate as the Napa Valley Wine Auction are critical to the event's future, notes Capitani. “We're really good at sticking with something until it loses its spark,” she says. “Our biggest challenge, looking at the next couple of years, is to remain innovative.”