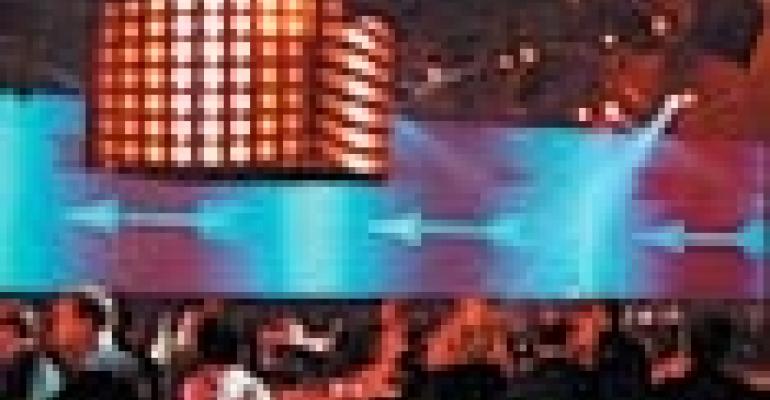 THE NEW YORK-based Robin Hood Foundation prides itself on applying 100 percent of donations directly to helping the city's poor. So it seems right that Event Resources New York should view its 100-percent commitment to production of the organization's annual gala as a fair deal. “We coordinate, supervise and help plan everything to do with the building, lighting, audio, video, design and talent,” says David Stallbaumer, partner in the New York-based company, which has worked on the foundation's fund-raising event each spring for five years running.

The company's goal is to transform all of the event's 50,000-square-foot space in New York's Javits Center into a feast for the senses of more than 3,000 gala guests. Its responsibility is to do so with little money, little load-in time and huge expectations on the part of client and attendees alike.

With a majority of guests returning year after year to the gala — New York's largest fund-raiser, which brought in more than $16 million this year — innovation is priority one.

“It's not like marketing to a bunch of new people every year,” Stallbaumer says. “Our challenge is always trying to do something that exceeds the ‘wow’ factor of the previous year.”

For this year's event, held May 28, Event Resources coordinated a team of lighting, set-building and audiovisual pros in bringing to life an “all-red” creative concept by lead designer Avi Adler, New York.

Challenging areas included the cocktail bar, where the problem was the potential for a cramped atmosphere, Stallbaumer explains. An “infinite space” illusion provided the solution. “It's very simple technology,” he says, calling the 234 4-by-8-foot Mylar panels hung on the room's walls and ceilings “a cheap, light way of making mirrors.”

Not only did the mirror effect give the impression of expansiveness, but it also increased the intensity of Adler's requested red lighting — which is usually too dark to light guests effectively, according to Stallbaumer. Although only 200 dimmable red fluorescents ultimately were used, the mirror effect made it seem “like there were 10,000 of them,” he says.

TRICKS OF THE TRADE

For guests, event night offered a wealth of surprises intended to inspire the spirit of giving. For Event Resources, the evening provided a proving ground for pulling off several feats of production magic.

The first was creating a doorway between the cocktail area and main dining space while guests' attention was turned to a video presentation in the bar. “This year, essentially what we did was open a 110-foot-wide door in about four seconds,” Stallbaumer says. The “door,” he explains, was actually a scrim on motorized trusses that gathered up on itself from the bottom and disappeared into the ceiling, all behind guests' backs. Prompted by the video display, attendees turned to see what Stallbaumer calls “another few acres of space,” decked out in red carpet, red table linen, and pink and red floral arrangements.

Inside the dining area, production components provided a source of practical information as well as a canvas for Adler's artistry. In particular, huge monitors mounted around the room's perimeter identified seating sections, then switched to displaying moving “video wallpaper” designed to bleed from screen to screen. Surrounded by the monitors, guests dined on beef filet along with chicken breast filled with white-truffle mousse, served by a super-efficient crew from Glorious Food, New York, which displayed precision that Stallbaumer calls “staggering … it's military.”

A post-meal auction brought more excitement, as guests bid on such once-in-a-lifetime experiences as a trip for 12 to Florida for two days of road racing, followed by six days on a privately owned piece of the British Virgin Islands.

Finally, it was time for entertainment and, with it, another well-timed Event Resources trick. With two full band performances to accommodate this year instead of the usual one, Stallbaumer says sleight-of-hand was again in order. This time, he turned to a turntable stage, which rotated after a performance by Elton John to reveal soul singer James Brown and his band on the other side. “It was pretty seamless,” Stallbaumer says.

Why would a production company take on an event where obstacles wait at every turn? This year, for instance, reduced load-in time — usually the team gets a week; this time it had one fewer day — meant borrowing a 70,000-square-foot warehouse to pre-assemble almost a mile of lighting trussing in 50-foot pieces for easier transportation and install.

The answer, Stallbaumer says, is far less complex than the production itself: “The Robin Hood people are amazing. What they do is incredible.”

Event Resources partner Tanya Greenblatt concurs: “It is the most rewarding event we work on during the year, and that's why we love it. Yes, it's a lot of hard work, but what good things in life are not hard work?”


Turn to page 57 for a list of resources for this event.

A FEAST FOR PHILANTHROPISTS

Roasted Filet of Beef, and Chicken Breast stuffed with Truffle Mousse, served with Wild Rice and a Melange of Spring Vegetables