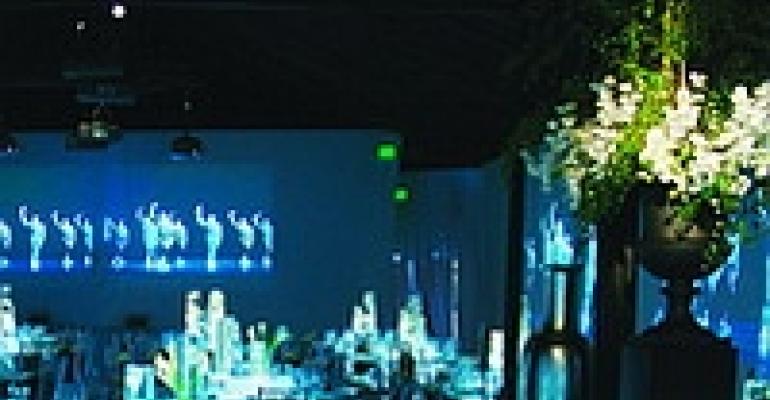 When San Francisco-based Ideas Event Decor & Production opted not to bid on the San Francisco Ballet's 2008 opening night gala — an event the company had designed for the past two years — company founder J. Riccardo Benavides knew he was taking a risk. “From a business perspective, it's a scary approach,” he admits. Instead, the company put all its energy into a bid for the ballet's high-profile opening night dinner celebrating its 75th anniversary “New Works” festival. Fortunately for Ideas, the risk paid off. After winning over the ballet committee with its creative “ice as diamonds” design, the company executed a truly cool affair.

With San Francisco society stalwarts backing the ballet — “These women really know their stuff,” says Ideas marketing director Jennie Allen — the event firm knew it had to stay in step.

First, the event team presented its proposal at San Francisco's sumptuous St. Regis Hotel rather than in a standard office setting. More importantly, Ideas impressed the volunteer planners with a concept that “combined old and new,” Allen says. “It was incredibly forward-looking but also recognized that ballet was founded in traditions of the past.” The key element was ice, representative of the diamonds associated with a 75th anniversary and, thematically, of the suspension — the “freezing” — in time of a momentous event.

The design team started with the event's entranceway tent. Though designers originally “toyed with the idea of actually creating the entranceway out of ice,” Allen says, concerns about meltwater dripping on guests' fancy clothes led to an alternative: specially treated plexiglass “ice” with the San Francisco Ballet's new branding images etched into its slick surface.

Past the entry, a foyer-like space featured three oversize ice sculptures, each standing more than 8 feet tall. Suspended in the glistening ice were diaphanous ballet costumes. The result: an impression of the “incredibly feminine elements” of classical ballet with the “hard, contemporary edge” of new dance works, Allen notes.

Circling the entire tent interior, a wall treatment constructed of stretched scrim stood 2 feet away from the wall and “basically duplicated the tent wall,” Benavides explains. He designed the faux wall to create the feel of a gallery interior, rather than a pliable fabric tent, and to screen crystal-clear projections of San Francisco Ballet dancers in action.

While complex to execute — for example, exit doors had to be scrimmed individually to create an illusion of uniformity while maintaining safety standards — the result was a “very streamlined look,” Benavides says.

The dining table design stood out as one of the evening's stars. The design team “felt strongly about not using linen” in keeping with the evening's icy aesthetic, Allen says, opting instead for glass-top, internally lit tables. One set of centerpieces displayed lifelike silk calla lilies frozen in ice, deftly avoiding the risk of real petals turning brown in the water. Another arrangement featured glass pillars with a pas de deux of submerged white orchids mixed with sculptural wire. Instead of votives, all tables featured LED lights sunk in ice-like gel cubes.

Rather than fight the inevitable heat generated inside the tent by the more than 800 guests dining on lamb noisettes and fingerling potatoes from San Francisco-based McCall Associates, the Ideas team used the warmth to its advantage. “The melting of the ice was more a design feature,” Allen says. Custom receptacles at the base of each centerpiece caught the drips in style. “While the wall projections were changing, the ice was also melting and changing forms, just like ballet,” she adds.

Benavides is the first to admit that the event was one of the most daunting propositions Ideas has faced. “When we interviewed for the job, I was really nervous. My palms were sweating,” he recounts. Allen adds: “We were proposing some incredibly complex concepts, and thinking, ‘How are we going to make this happen?’” Yet at the end, “It really ended up going above and beyond what we had proposed,” she says. “The room was far more spectacular than what was in the renderings.”

Allen credits success to taking a hands-off approach where needed. “The best events come from a collaborative process,” she explains. From the event's volunteer committee to the San Francisco Ballet's Julia Nottebohm, who handled logistics, to the organization's internal staff and the event's vendors, “We let people do what they're best at.”