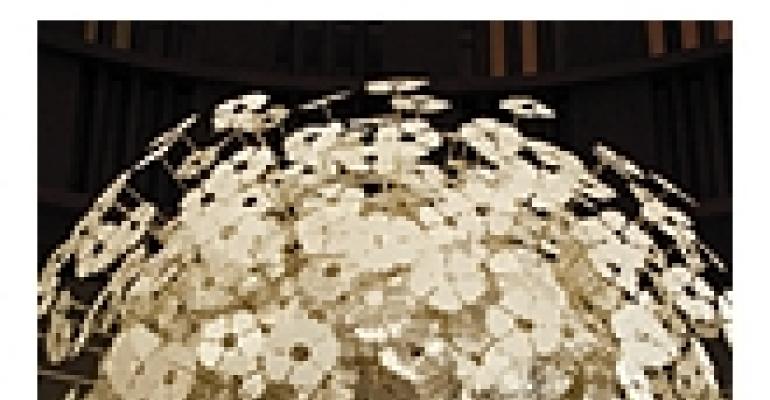 THE addition of a wing designed by the renowned Michael Graves didn't add just architectural edge to the Minneapolis Institute of Arts. The 113,000-square-foot wing, with its barrel-vaulted reception hall, was part of an overhaul that allowed the museum to showcase more artwork by providing space it had lacked “for years,” says institute special events director Kim Supple. So, naturally, at the institute's highly anticipated event to showcase the wing, the focus had to be on the art. But that didn't stop the museum from also emphasizing great food and beautiful decor by event designer David Stark, hired by another Minneapolis-based institution — expansion sponsor Target Corp.

To accommodate the institute's devotees and assorted art fans, the institute planned the June 10 opening-night event as a two-part party.

The first part, a gala dinner for 900 VIPs, gave museum patrons a sneak peek at the new space with cocktails in the wing's reception hall. Not to be outdone by the new digs, a dining tent set up next to the institute's main building got masterpiece treatment from Stark. The designer took his cues from the institute's renowned collection of textile pieces by William Morris, father of the 19th century's famed Arts and Crafts movement. Iron centerpieces painted white graced the tables, Supple says, their “umbrella-like canopies” dangling with Morris-inspired die-cut paper flowers. Underfoot, blue carpeting gave a burst of color to a space that was otherwise a “sea of white,” accented with color-changing ceiling-to-floor floral gobos by “lighting design genius” Michael Murnane of Minneapolis-based Foot Candles, she adds.

Even the VIP dinner, prepared by the institute's exclusive provider D'Amico Catering, was art-inspired. A first course of dramatically tiered avocado-and-crab salad and an entree of Kobe beef were followed by two artfully deconstructed desserts: a “new banana split,” with “elements of a traditional split pulled apart with a beautiful presentation,” Supple explains, and a similarly disassembled strawberry shortcake that was “really incredible — and really tasty.”

To keep the spotlight on the art, entertainment was a soundtrack rather than a spectacle. “We'd given some thought to having a headliner,” Supple says, “but what patrons want to do is see each other, have a great meal and get back into the museum.”

And get back into the museum they did, now joined by 2,500 additional revelers including museum members at all membership levels and Minneapolis locals. Participants in the “First Night Frolic” — part two of the evening's event lineup — found the new wing turned over to offer coffee, dessert and bar service. Adding dance to the evening's featured art forms, a group of local performers in “fabulous costumes made of living flowers” entertained celebrants in the space, Supple says.

Guests had the chance to roam the now 40-percent larger museum and view works of art — among them master prints, fine photographs and neoclassical paintings — in the institute's featured exhibits. “Not only did we want the expansion to be viewed, but through the last few years, we rehung the whole collection,” Supple notes. “Basically, it was a brand-new museum.”

Not just a pretty place to hang fine art, the Minneapolis Institute of Arts' new wing also adds unique event space to the venue. The 4,200-square-foot Graves Reception Hall, now available for rental, has room for 250 seated or 350 standing.

But, “This is not just a basic hotel banquet room,” Supple stresses. “What we try to do is incorporate an art experience into every event here.” For event clients, her department might suggest opening adjacent galleries as part of the program or bringing the venue's exhibits into the theme and design of the event. Whatever the client chooses, an event at the Minneapolis Institute of Arts is all about one thing: “exposure to the collection,” Supple says, “with a food and beverage element.”

Napoleon of Ratatouille with Feta and Red Bell Pepper Puree