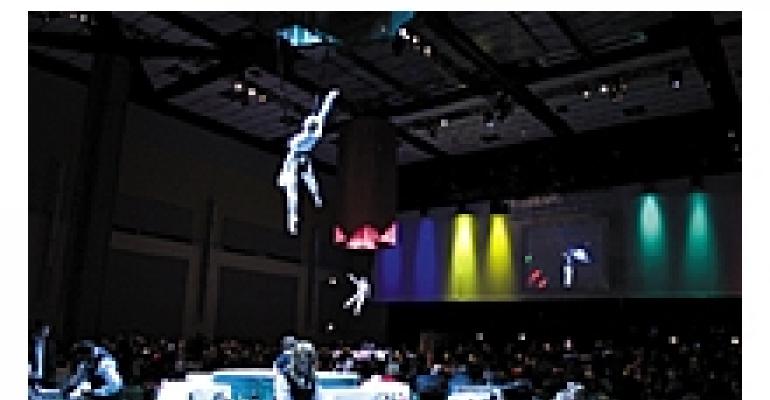 At the core of the Olympics is a love of spirited competition. Chicago-based Proactive got into the spirit of celebrating the city with a well-played fundraiser in support of Chicago's bid to host the 2016 Olympic Games. On behalf of client Chicago 2016 Committee, the event team raised $9.4 million at the March gala and helped persuade the U.S. Olympic Committee to tap the Windy City as its pick to host the 2016 games, beating out rival Los Angeles.

Proactive experience director Andrew Snyder wanted to make the attendees' sizeable donations — a table at the event cost as much as $1 million — significant. “{The performances} made the sense of donation and contribution very real,” he explains. “You see an 8-year-old on a pommel horse who can compete in 2016 because you made it happen.”

The event team delivered a night of sports-oriented experiences to 2,000 of Chicago's civic and business community members. Chicago's McCormick Place held the fundraiser, although the venue didn't immediately lend itself to an intimate evening.

At first, the vast Lakeside ballroom felt too impersonal to deliver the poignant punch Proactive was looking for. “From an experiential standpoint, we wanted our audience to feel as if they were immersed in what it felt like to be at the games when they are actually happening,” Snyder says. So the event team devised a design that would keep the 2016 Olympic Games at the forefront of guests' minds while helping them forget that they were standing in a football field-sized space. The clever setup included five satellite stages mimicking the pattern of the iconic Olympic rings. With each stage surrounded by a service bar and a color-coded section of tables, the design also managed to offset potential seating snafus. “The event management folks were able to say, ‘Mr. X, here's a map, you're at table 363 — that's in the green section,’” Snyder says.

The massive venue featured 50-foot-high ceilings, a detail the event team turned to its advantage. Drapes, columns and projection elements were elevated, Snyder says, in order to use all the space for the sold-out event. It made sense to hang some of the entertainment elements, too. “We had aerial athletes performing,” Snyder explains. “So there was a gymnast suspended from the ceiling, 30 feet in the air.” The impressive high-flying routines, which included such sports as tae kwon do, carried an important symbolic message, one that was key for an event raising funds for the far-off date of 2016. “We did want to create a sense of modernism and of the future,” Snyder says.

Olympic hopefuls provided entertainment for the majority of the evening — children between the ages of eight and 13 took to the five stages during dinner, giving the audience a glimpse of Olympic sports such as fencing and gymnastics. However, because the 30 young athletes were volunteers, it was never clear who would show up for rehearsal, or when. “Our production team, stage managers and talent wranglers had to work on the fly,” Snyder says. “We thought we were going to have kids A, B, C and D, and we got kids E, F and G, and they showed up an hour late after soccer practice.” The athletes — clad in white “to capture the hope, purity and the potential of the games,” he says — demonstrated sports to the tune of live music, courtesy of Chicago-based band the Brass Knuckles.

The combination of music and elegantly dressed athletes added a touch of class to the event. “The athletes as entertainment gave the event a youthful, casual sportiness,” Snyder notes. “But it didn't feel so casual as the kids showing up in their gym clothes.”