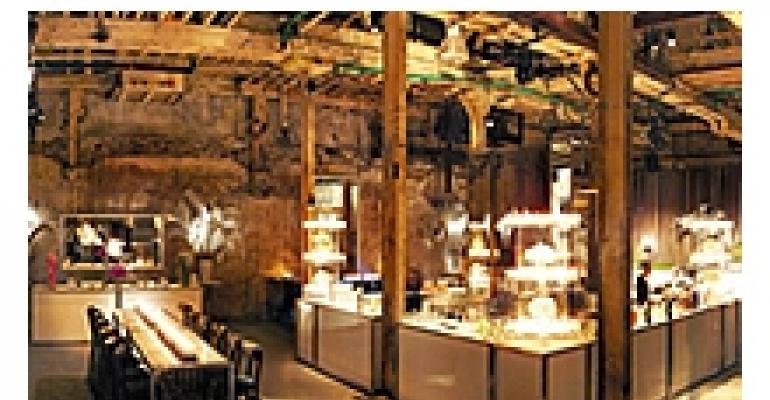 ON JAN. 19, in the midst of a frosty Canadian winter, Toronto's Distillery Historic District was a bona fide hot spot. That's when the complex of event sites, galleries and cafes, located in the city's funky Corktown area, transformed itself from the former fermenting cellar that serves as its main event space into a sizzling “Industrial Chic” soiree. Making up the guest group at the Distillery's self-promotion party were more than 650 hospitality and event-planning pros from across the region who came to find out why, as Distillery event manager Wendy Gamble puts it, the site is “one of the best rental venues in the city.”

TURN UP THE HEAT

The warm tones that dominated this year's event were in distinct contrast to the cool shades on display at last year's bash — the first of its kind held by the District.

For this year's event, Gamble joined forces with production partner Peter Somers of Toronto-based Contemporary Furniture Rentals to come up with a design that would take advantage of the site's 8,000 square feet of raw, stone-walled space. The design was also intended as a contrast to last year's wintry white color scheme, showing off the venue's versatility.

Their concept incorporated Somers' low-profile lounge furniture in shades of espresso brown and eucalyptus green. To keep things cozy, lighting was mainly limited to pin-spotting on the scattered seating areas and an abundance of glowing candles, all reflected in oversize mirrors custom created by Somers.

As for outfitting the food stations set up around the room's perimeter showcasing the 10 top-tier caterers participating in this year's event, Gamble and her team started with 16-foot draping behind each space to create dramatic height. Chic yet understated floral arrangements featuring long palm fronds painted white added allure, Gamble says, but didn't detract from menu presentations that included “decadent” shrimp cocktails in short martini glasses from Toronto-based North 44, and rack of lamb on wild mushroom polenta from Toronto-based Daniel et Daniel.

For all the event design's fire, its biggest wow came from ice, Gamble notes.

That ice took the form of two spectacular chandeliers crafted by Toronto's Iceculture, hung from rigging points specially installed in the cellar's ceiling. Weighing in at a whopping 1,500 pounds apiece, the chandeliers proved an awe-inspiring way to show planners how they might utilize the site's high ceilings, which peak at a soaring 35 feet, Gamble says. And it wasn't a bad way for the vendor to sell its own talents as well: “From that [display], Iceculture was asked to redo the chandeliers for an event in the space four days later!”

It's hard to beat a ton and a half of suspended illuminated ice for impression-making. For those vendors whose offerings may have held subtler charms, Gamble offered promotional opportunities to help attendees recall, and call, post-event.

The most effective of these, she says, was a custom CD created by sponsoring DJ Third from the Sun. Packaging for the giveaway disc included a reprint of the invitation on the front of the case, and a list of all event sponsors and their contact information printed inside.

Gamble's sense of gratification in association with the event comes from a number of sources. Among these she cites “the ability to work with someone as great as Peter [Somers],” whom she calls “a genius.” There's also the fact that as a result of a smart event layout plan that included a central four-sided bar serviced by eight bartenders, “No one had to wait more than a minute for a drink.”

Most of all, perhaps, are Gamble's ROI results. “That night alone I closed six events,” she says. “Since then, I've probably booked an additional four so far, with another 10 to 15 events on hold between now and 2006” — all through clients who attended the Industrial Chic shindig.

That's not a bad showing for a planner who came on board at the Distillery less than two years ago, and one who freely admits, “My background is not in this area. I came from venue management, places like the Corel Centre.” And while her past may be rooted elsewhere, Gamble sees a bright future in her Distillery position: “This job has allowed me to go to the next level, and to do it in a space I really believe in.”

Lime Chile Shrimp with a Shooter of Green Coconut Curry, and Fresh Thai Salad with Mango, Cashews and Thai Basil