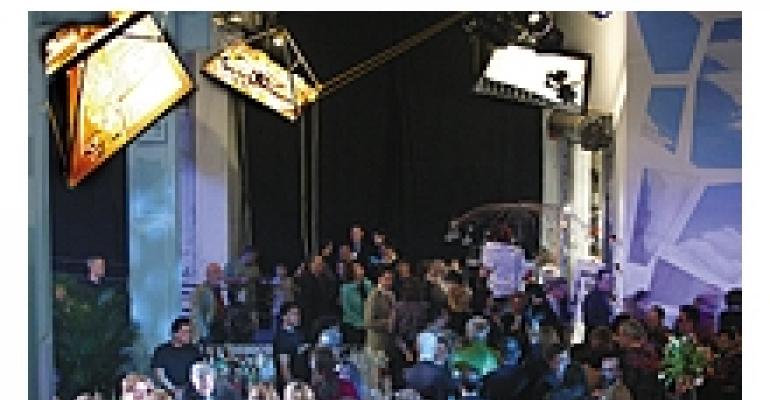 THEATER OF THE ABSURD

MEMBERS OF THE Redmoon Theater in Chicago are used to putting on elaborate productions — it's part of the job. So when it came time to produce their third annual Spectacle Lunatique fund-raiser in February, it was simply a matter of getting into character, explains artistic director Jim Lasko, who worked with the theater's team of artists and designers to stage the surreal soiree.

The event's “Fire and Ice” theme — selected by a committee made up of theater board members and fund-raiser volunteers — gave the crew its cue for both decor and entertainment. “The committee said ‘Fire and Ice’, but what made sense to us was more of an action, so we thought in terms of a thaw,” Lasko explains.

On event night, guests entered the theater through an alley flanked by tall brick buildings. “It's not a pretty entrance, so our first idea was to tent it and cover the brick walls to make it appear elegant,” he says. When that idea proved too pricey, the design team decided instead to play off the urban alley setting. Artists used plasma cutters to carve designs into 50-gallon oil drums, which were set afire to serve as huge lanterns lining the walls of the alley. Dry ice created a layer of mist above the red carpet that led guests into the theater.

Once inside, guests were greeted by cool white light and shadows, which changed to warmer hues over the course of the evening to represent the thaw that the designers envisioned. A whimsical cast of characters wandered through the space, including a performer wearing a table “hoop skirt” — a table on wheels designed to look like the bottom of a dress — strewn with silent auction items for guests to bid on. Roving “secret agents” glided across the room serving hors d'oeuvre out of custom-made briefcases. Another performer rode through the crowd on an elaborate bicycle topped with a metal canopy that held wineglasses. As the rider pedaled, the canopy twirled overhead; when he pulled a lever, wine poured from a bottle into waiting guests' glasses.

For the final act, guests were invited outside to sip spicy ancho chile-scented hot chocolate and watch a squirrel-costumed performer climb into a human-sized “hamster wheel”; when he began to run, he set off a pyrotechnics show. “It wasn't supposed to make sense — its virtue was in its absurdity,” Lasko laughs.

The event's entertainment was eccentric, but it so enthralled the 350 guests that they donated $110,000 toward the theater's artistic and community endeavors. “The events we throw are fantastic and outrageous, and we always try to outdo the previous year,” Lasko says. “This was the culmination of that — it drew itself to a very absurd conclusion, but it was fun to do.”