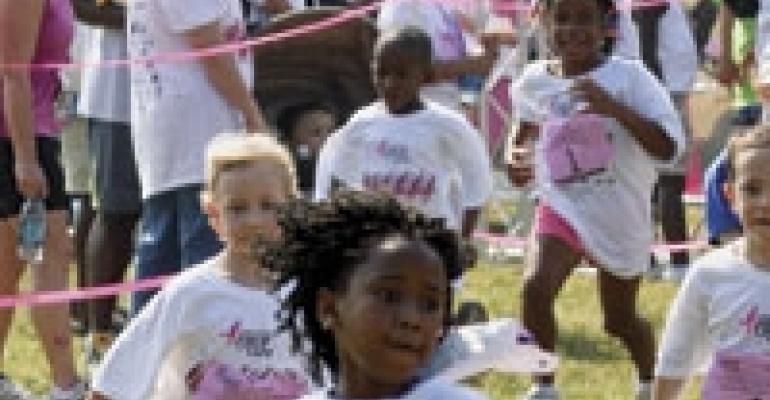 Executing a successful run or walk event can be a long road. The sheer scale of run/walk events dwarfs many other special events. Instead of hundreds of participants, the event team may have to deal with thousands. And rather than working with only one venue, the event's path may cover miles — usually on public property.

Many event professionals agree, however, that with the big responsibilities come big rewards — especially when the event helps raise funds for a worthy cause. Alison Jenks is vice president of marketing for Los Angeles-based TBA Global, which produced the 19th annual Susan G. Komen National Race for the Cure in Washington in June. The event saw nearly 50,000 breast cancer survivors, their friends and family members, celebrities and activists converge upon the National Mall for activities including a 5k race, celebrity speakers and a performance by Vanessa Carlton. “The main difference between planning this event and a corporate event,” Jenks says, “is the personal nature of the message and how it touched each person on our team.”

With her venue on National Park Service land only a stone's throw from the White House, “Our team had to be 100 percent buttoned-up,” Jenks recounts. “Every modification had to go through several governmental agencies — communication was key.” Jenks and her team worked with dozens of organizations, such as the local police department, to stay in compliance with the city. “The sheer number of organizations involved with the permitting process of such a large event means that an event team has to be extremely organized at all times,” she says.

The event team made the most of a committed but unpaid staff: volunteers, more than 1,000 of whom turned out to help. A brief training period enabled the volunteers to line the race route and man information booths. “It's important for race participants to have go-to information people,” Jenks says.

But along with hardheaded logistical planning, the Komen event benefited from keeping the ultimate beneficiaries of the event — people touched by breast cancer — center stage. In the “Parade of Pink,” 3,500 breast cancer survivors walked under an archway of pink balloons, a reminder of the “pink ribbon” logo symbolizing the fight against breast cancer. “All of the hairs on my arms stood up,” Jenks recalls. “We wanted the cancer survivors to be celebrated.”

TBA's yearlong work on the event paid off handsomely: The Komen for the Cure organization pulled in $4.9 million to fund breast cancer research.

BRAND ON THE RUN

A combination festival for runners, charity event and branding opportunity, the 10k Nike Human Race, held Aug. 31 in 25 cities around the world, aimed to create the world's largest-ever running event.

For the Los Angeles race, which drew more than 12,000 participants, Los Angeles-based OnBoard Entertainment tapped Entertainment Lighting Services of Sun Valley, Calif., not only for production support and equipment, including lighting, staging and truss, but also to overcome logistical hurdles to make the race a winner.

ELS marketing manager Danica Stein says the biggest challenge her team faced in obtaining street closure permits was the quick turnaround time. “The challenges with street permits are always the same,” Stein says. “You must find a happy balance with what you are trying to do and have as little impact on the city, local residences and businesses as possible.” Having a close working relationship with the city made things easier, she adds.

On race day, ELS set up stage, lighting and sound equipment at nine locations throughout Nike's course, which snaked through downtown L.A. To keep runners moving through the traffic-choked streets, ELS built a rolling start/finish line truss structure that could be repositioned quickly. The team also erected multiple rolling press risers and performance stages along the race route.

In an odd twist, the Nike race took place in the evening. To emphasize both Nike and sponsor logos — as well as to play into the event's red theme color — ELS provided lighting for runners along the course and for the media. The ELS motto for the event: “If there is an element, light it!” Stein says.

One of the stalwarts of walk fundraisers, AIDS Walk started in 1985 in Los Angeles and within two years branched out to San Francisco and New York. Still produced by its founder, Craig R. Miller of MZA Events, the events have raised more than $300 million for leading AIDS charities in the U.S., according to Colin Weil, MZA's chief operating officer.

Despite the sour economic climate, the October AIDS Walk Los Angeles still drew a healthy crowd of 30,000 participants and raised $3.2 million. How? The event team stayed true to its model, which zeros in on the event's goal of creating a “melting pot” of support that crosses all boundaries of gender, race, age and orientation. “Our process is strategically, not creatively, driven,” Weil says. “We focus on messages that will best engage the community to encourage participation and support.”

As in years past, a mix of celebrities and politicos greeted and energized the crowds, and a bevy of marquee corporations offered their own team fund-raising and sponsorship. The AIDS Walk formula worked again; as Weil puts it: “Challenge: How do you register, entertain, feed and keep safe 30,000 people as they stroll 10k through the streets of Los Angeles? Solution: 1,500 volunteers who are trained and engaged. Result: The smoothest AIDS Walk route in memory.”