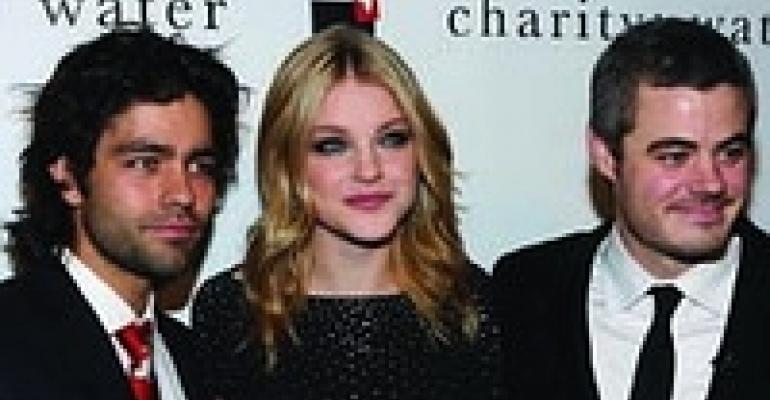 While raising cash is the ultimate goal of any charity event, New York-based Metropolitan Events' Shelly Taggar says her client had an objective of his own. “For Scott,” she explains, “the main thing is this is not a regular event — this is a party.” The “Scott” she refers to is Scott Harrison, founder of nonprofit organization “Charity,” whose “Charity: Water” campaign got a big boost from its second annual ball, held in December at New York's Metropolitan Pavilion.

Taggar her says her own goal was to wrap all the event's critical components — education, auction, inter-active activities — in a kick-your-heels-up, let-your-hair-down atmosphere that both the charity's founder and event guests could appreciate.

Fortunately, Taggar had as her venue Metropolitan Events' own North and South Pavilions, a 30,000-square-foot gallery-like space, perfect for installing large screens, unique stages and displays, and Harrison's own photographs of West Africa — a region that benefits from Charity: Water's projects to supply drinking water.

Among the most unconventional elements Taggar slated for the space was the Water Walk — a catwalk-like, message-emblazoned stage designed by New York's Tripp/Mix Productions that invited sponsored guests to walk its length carrying two 40-pound jerry cans filled with water. “All our guys — the cleaning staff, the bartenders, everyone — walked it,” Taggar recounts. “Adrian [Grenier, event host and star of hit TV show “Entourage”] walked twice, [designer] Isaac Mizrahi walked twice.” At a sponsorship rate of $10 per walk, with a commitment of $5,000 each from sponsors including Elle, Nautica and Shutter-stock.com, it wasn't long before the hit activity hit its $60,000 target.

Other key attractions that got guests talking — and giving — included a hospital-room display, which showed the effects of clean water on bed linen and sanitation, and a series of small stages featuring children's swimming pools in which floated Harrison's photos of African children.

Of course, to balance such a serious message, a goodly dose of entertainment was in order. It came in the form of headline performer Cat Power, who got guests grooving with her signature brand of soul-baring indie rock. But nothing could beat the impromptu antics of dance-music legend Chaka Khan, who surprised everyone — Taggar included — by interrupting the live auction to announce she wanted to donate a kiss, for $500, then taking to the stage for an unscheduled 30-minute crowd-wowing show.

Along with the event's many unscripted moments came the challenges that naturally accompany such free-flowing fun.

Taggar says working with many volunteers — “from bartenders to wait staff, registration people, volunteers at the Water Walk, all the people who don't do what they're doing on a regular basis” — meant taking special measures to ensure professionalism on the party floor. “We provided a floor manager to be in charge of all wait staff and food, one in charge of the bar, etc.,” she notes. In addition, volunteers in every area were coached in Charity: Water's background and mission because education is one of Harrison's top priorities, she adds.

Keeping on top of the event's schedule also kept Taggar on her toes. Again, with education so important to client Harrison, “Speeches went on very long and made the live auction go longer,” the producer notes. She explains that her staff shut down the music and bar during the presentation to ensure guests' attention but ended up having to circulate servers with drinks to make sure that the crowd didn't grow restless during the lengthy interlude.

Which brings another complication: “We had Grey Goose donate everything,” Taggar recounts. “Not only vodka, but a full bar.” The next time she does the event — which she will later this year — “maybe I'd get additional wine,” she says. Also, “People complained that they wanted more food,” she adds. Though the event is meant for mingling, rather than dining, “People want to eat,” she says. She acknowledges, “It's something Scott and I have to work on.”

Taggar, who notes that she has a special place in her heart for the Charity: Water event, says that ultimately it's not just her championing of the cause but the commitment of loyal vendors that makes event successful.

“We donate our relationship with all our vendors, and they donate all their things too,” she states, citing contributions from Teterboro, N.J.-based Party Rental Ltd. and New York lighting firm Scharff Weisberg.

On top of that, “Scott takes your $10 or $10,000” — or in the case of this year's event, a whopping $500,000, doubling the previous year's numbers - “and puts it the whole thing into the charity itself. You know he's going to take your money to Africa and show you pictures of what he did with it. I used to donate to different organizations, but I never felt as though it reached the thing I was donating to. I give Scott $150 to build showers in India — I know $150 is going there to build them.”