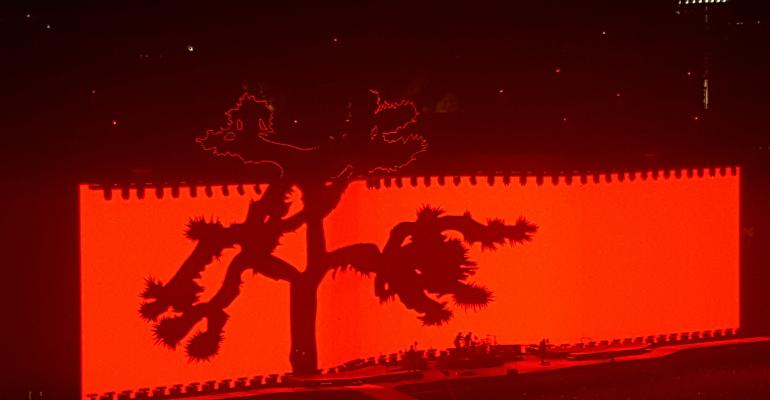 Judging by my Facebook feed, many special event pros were in the audience with me this weekend as the legendary band U2 took over the Rose Bowl in Pasadena, Calif. (Sorry if you could not see me waving at you, but the cannabis smoke in my section was just a little too thick.)

U2 has a special hold on my heart for a couple of reasons. No. 1, of course, is great music. But No. 2 is stunning staging. U2’s messaging is like the label on a bottle of Chanel No. 5—clean, strong, no wasted detail.

Like many people in our industry, I am glued to the TV screen for Super Bowl halftime shows. And there is a lot to like at these performances, from Lady Gala and her drones (2017) and the exuberance of Bruno Mars (2014) to Katy Perry and her indomitable Left Shark (2015). That year, more people watched the halftime show than the football game itself.

But my landmark Super Bowl halftime show is, without question, U2 in 2002.

In the wake of the 9/11 attacks in the U.S., Super Bowl was postponed from January 2002 to February. The act originally scheduled to play pulled out due to security concerns. The event producer who shared this information with me would not tell me who that was.

But U2 stepped in.

The stunning U2 show in 2002 included a 120-foot-tall Kabuki scrim that scrolled the 9/11 victims' names, and Bono running around a heart-shaped stage. The songs—“Beautiful Day,” “Where the Streets Have No Name”—played that night were the songs we all heard again on Saturday.

Our concert was the 30th anniversary of the band’s best-selling album “The Joshua Tree,” a story told eloquently by an enormous glowing image of a Joshua tree backing the band. These visuals were not complex. Instead, they were indelible.

If you want to learn how to create unforgettable messaging, U2 shows us how it’s done.