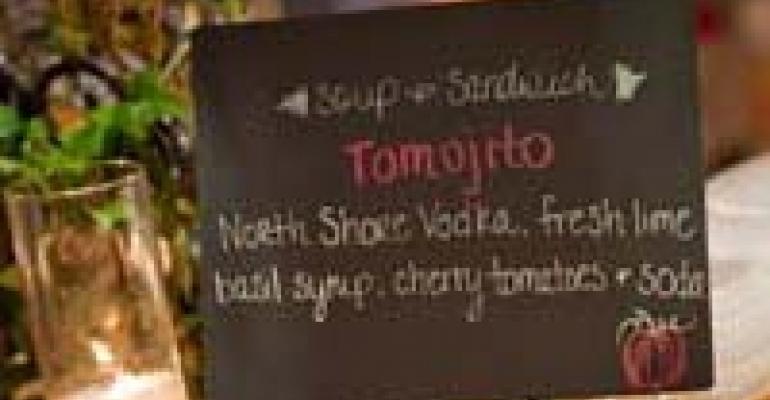 Bar For The Course: Cocktails Worth Celebrating

Get ready for the holidays with these distinctive cocktails for special events.

Customized simple syrups are a behind-the-bar staple for Dan Scheuring, event service manager and mixologist for Blue Plate. “From a service standpoint, creating customized simple syrups reduces the service time for the guest and allows more variety at a lower cost for the client,” he says. Favorites for the holiday season include house-made cinnamon bark and vanilla-nutmeg varieties. “In the colder months, I also turn to ciders, preserves and spices to make stylish, simple cocktails,” he adds.

When it comes to making memorable holiday cocktails, Scheuring looks to the pantry, drawing inspiration from traditional holiday desserts such as pumpkin and apple pies. “I like to use ingredients that remind me of classic holiday moments, such as fig marmalade, pumpkin pie filling and anything maple,” he says. Indeed, two of his most popular holiday drinks are the “Pumpkin Pie” and the “Savory Apple Pie,” both served over ice in old-fashioned Mason jars.

Icy, frozen cocktails can work well in the cooler months, too, as they pair well with winter-themed events. “We have been playing around with different ingredients in dry ice to make granita-style tastings to pair with hors d'oeuvre made on the anti-griddle,” Scheuring says. A favorite cold-weather granita cocktail combines silver tequila, cinnamon bark simple syrup, Mandarin orange puree and champagne served on a miso spoon.

The bar scene's current fascination with the Prohibition-era speakeasy has not been lost on Dan Smith, senior event specialist and mixologist at Good Gracious. “The popularity of pre-Prohibition-style cocktails is still increasing,” he says. “These cocktails are generally simple to assemble with the right ingredients.”

To Smith, the right ingredients mean house-made cordials, syrups and bitters. To that end, Smith replaces the ubiquitous Rose's lime juice with a house-made lime cordial created with lime juice, lime peel, sugar, water, and citric and tartaric acids. “It has an amazing fresh lime flavor,” he says. “We also make similar cordials with fresh clementine, blood orange and yuzu.” For the winter months, Smith favors simple syrups made of ginger, pomegranate, molasses and dates.

Bitters, Smith adds, are also making a cocktail comeback. “Specialty bitters brands are producing delicious varieties such as lavender and baked apple,” he says. “I have experimented with making my own as well, using flavors such as black pepper-rosemary and vanilla with wild lime and rose.”

When it comes to simple, classic cocktails, ice can make a bold visual statement. “Much attention is being paid to ice,” Smith says, noting that jumbo single ice cubes, spheres, shards and crushed ice are becoming the go-to coolers for on-the-rocks options.

A sip and a bite make for a perfect cocktail and appetizer combo. “We often pair tray passed hors d'oeuvre with miniature cocktails,” Smith says. Some fall favorites: a savory foie gras and grape cone with a sip of vintage port, a paella shrimp cake with a shot of sangria, and an after-hours cheeseburger cone with a mini mudslide milkshake.

Cooking with liquor is nothing new, but creating an entire cocktail menu based on appetizers prepared with various liquors is indeed inspired. At a recent fall cocktail party in downtown Los Angeles, Good Gracious served such booze-infused appetizers as “Drunken Tomatoes” (tiny heirloom tomatoes dipped in chile-infused tequila and dusted with chile salt and spice), “Bloody Mary Shrimp” (crostini topped with vodka Bloody Mary gelee, lime-poached shrimp, bacon jam and a celery leaf; see photo above), and “Singapore Sling Duck” (a rosemary crepe wrapped around a juniper and gin confit of duck with a dash of rosemary bitters and cherry jam).

As the days get darker, so do the drinks at the W Hotel's Ninethirty Restaurant. “For the new fall cocktail menu, I'm focusing more on the darker spirits,” says mixologist and bar manager Stephanie Sanders. “Playing with Scotches and bourbons opens up a whole new world of cocktails, and it challenges one to really explore the palate and create a complex drink.”

Sanders complements the smoky, earthy tones of these liquors with fresh herbs, spices and fruit juices. Her signature “Sugar & Spice + Everything Nice” cocktail combines an apple-cinnamon infused bourbon with a touch of vermouth, while the “Warm & Fuzzy” adds Disaronno Amaretto and cinnamon to warmed milk.

Cheers! Toast-worthy drinks for the holidays

Drunken Cranberries with Vodka and Rosemary: “These berries serve as a great, fresh way to bring seasonal cranberry flavor into cocktails without having to use reconstituted cranberry juice” says Smith, noting they can be made with a variety of liquors.