/sites/all/themes/penton_subtheme_specialevents/images/logos/footer.png
Recent
Recent
Register now and get your key to Catersource + The Special Event
Apr 23, 2021
How to Hire and Keep Resilient Employees to Navigate Change with Dr. Deborah Gilboa
Apr 22, 2021
Who's News in Special Events for April 22, 2021
Apr 22, 2021
Why It’s Crucial That You Nurture Your Relationships With Venues
Apr 20, 2021
How to Execute a Styled Shoot with Margaux Fraise
Apr 19, 2021 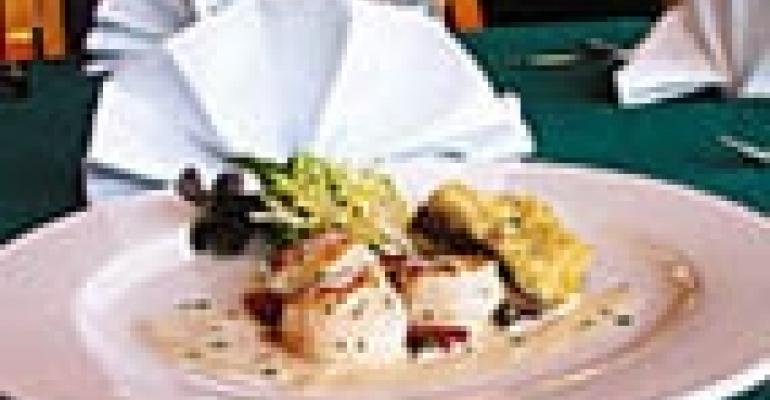 BUSINESS ON THE TABLE

AFTER SEVERAL LEAN years, corporate clients are once again bringing their considerable heft to the table, catering managers say. “We're seeing business come back,” notes Judith Feldman, director of special events at the Luxe Hotel Sunset Boulevard in Los Angeles. “People are traveling more, there are more companies having board meetings and corporate retreats — companies are realizing that they can't quite do it in their office buildings anymore.”

Business may be back, but the days of heavy, three-martini business lunches are long gone. Today's menus reflect the fact that corporate clients are watching both their weight and their wallets.

Mike Bodjiak, director of culinary standards at Sea Trail Golf Resort & Conference Center in Sunset Beach, N.C., attributes his lighter menus to both greater cost- and health-consciousness on the part of his clients. His lighter breakfasts include a selection of freshly baked goods including muffins and scones, in addition to fruit options such as spiced melon and fresh raspberries — “things people can eat on the run,” he says.

Len Elias, director of food & beverage at Aberdeen Woods Conference Center in Peachtree City, Ga., says, “Lunch used to be a very heavy meal for us here, because in the South, people are not shy about piling food on their plates.” Recently, however, “I have seen a 100 percent turnaround in that area. A lot of people are just eating salad and a small piece of chicken,” he observes.

The continued trend of low-carbohydrate plans such as the Atkins and South Beach diets also is keeping caterers on their toes.

“This year has been very challenging with the huge jump in popularity of low-carb diets,” Elias notes. He has had to overhaul the center's “Light and Natural” food program, which originally was based on complex carbohydrates and reduced portion sizes of proteins, to meet this demand. “We basically had to throw that out the window to an extent and have adjusted our menu to include specifically low-carb items such as stir-fry lettuce wraps and compound salads with proteins,” he says, naming a salad of apple-cider-marinated chicken tenderloin and mesclun greens with a cranberry vinaigrette as a top choice.

Bodjiak has also noted a change in the eating habits of his clients — many ask for extra vegetables instead of a baked potato, or request no bun on their chicken sandwich. However, he says, “I haven't seen it to the point where we're going to an Atkins menu.”

While corporate clients may be eating lighter, that doesn't mean they've scaled back their taste or service expectations.

Feldman cites swift service as a common concern of her corporate clients. “If it's a seminar or other meeting, they want to make sure that when we serve the food, everything is on time — they want to get in, have their meeting and get out.” She notes that it's important to meet with a client before an event and explain, “A served lunch with three or four courses will take a lot longer than a buffet, where people can come out of a meeting and serve themselves.” And while a buffet gives guests variety, “It still needs to be gourmet and presented in a beautiful way.” A popular option at the hotel is a sandwich board that includes upscale selections such as smoked salmon and goat cheese on multi-grain bread, and roast beef folded into a mini croissant — “not your regular deli sandwiches,” Feldman explains.

Elias notes that with his 60,000 square feet of meeting space, buffets are the service style of choice “because we have so many people coming through in such short periods of time.” To keep the crowds moving, “The key is to get as many chefs as possible out into the dining room and producing as much food as they can,” he says. “It's very similar to a chef's table, because [the guests] see the cooking going on and they're interested in what's happening.” As an example, Elias cites the fact that his breakfast menu features more than 30 items, including waffle, omelet and eggs Benedict stations. “Because our guests are with us for days at a time, they're essentially a captive audience — I don't want them to have to ask for anything,” he says.

For corporate evening events, “The focus now is on hors d'oeuvre that look beautiful and taste wonderful, and they should all be bite-sized — people want to talk, to network; they'll have a glass of wine in their hand, and they don't really want to carry a plate on top of that,” Feldman notes. “They should be able to take it from the waiter's tray and put it in their mouth.” She is currently serving spicy tuna tartare on crispy taro root slices, peppered roast beef with caramelized balsamic onions on crostini, and smoked salmon with dill cream cheese on cucumber rondelles.

Bodjiak notes that many of his corporate clients are holding multi-day events, with at least one evening's menu centered on a fun themed buffet. A number of regional themes are popular with clients, he says, including a Carolina shrimp feast with a selection of boiled and fried shrimp, and a Southern-style “pig pickin',” which features a whole pig smoked on the grill. “We're definitely seeing people wanting to get away from the formality of it all,” he says.