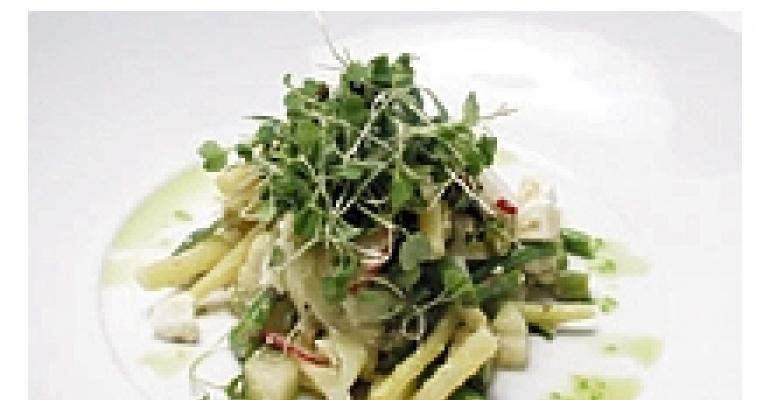 WITH THE DIET industry composing a multi-billion dollar business, it's no surprise that f&b experts are creating menus to meet specific diet demands. And while clients are asking for many things to be left out of their event menus, they still want plenty of flavor left in. Whether the request is for no meat, no fat or no carbs, caterers are keeping pace.

“More and more, people are starting to prepare food differently for themselves, and there's so much more availability than there was five years ago — organic, farm-raised, all these types of food are becoming more and more popular,” he explains. “If that's how clients eat at home, when they entertain, they want to share that with their guests.”

To meet demand, the company's chefs have created menus that cater to the desire for innovative organic, vegetarian and even vegan cuisine. “People are sick of standard pasta as a vegetarian entree,” Wharton notes. Updated menu items such as vegan “paella” — a medley of saffron rice, grilled red and yellow bell peppers, asparagus, baby carrots and soy-based sausage substitute in a tomato reduction — and almond-crusted tofu served with Szechuan slaw are meeting the demand. And while “some people think that ‘vegetarian’ means bland,” he adds that Indian fare — a cuisine that already features many vegetarian items and that has been gaining in popularity recently — has been great for adding spice to menus that leave out the meat.

While the low-carb craze exemplified by the Atkins and South Beach diets is waning, low-carb menus are still big business for events at many hotels and conference centers.

At the Garden City Hotel in Long Island, N.Y., the “Low-Carb Banquet Menu” has been a hit with both meetings and social clients, notes director of catering Joseph Borbély. “Many people are still skipping the pastas, skipping bread and pastries,” he says. The menu caters to these clients with items including an appetizer of lumpia-wrapped tuna with Asian vegetable slaw, pesto-grilled chicken with green bean, tomato and mozzarella salad, and sliced beef sirloin with broiled tomatoes and shallots. And cakes and ice cream may be off-limits to serious carb counters, but dessert options such as cheese plates featuring varieties from around the world and strawberries with whipped cream are rich enough to satisfy cravings.

The desire for flavorful low-carb dishes also allows his chefs the flexibility to experiment with traditional menu items, Borbély explains. He's given vegetable lasagna a low-carb makeover by replacing the traditional layers of pasta with thinly sliced zucchini. And while sushi is still popular, he is serving a lot of yellow tuna sashimi, which cuts out the rice and seaweed used in sushi rolls.

Marriott Hotels & Resorts reports tremendous success with its “Fit for You” program. Instead of focusing on just one diet trend, “Fit for You” offers low-carb, low-fat and low-cholesterol menus that can be adapted to suit specific diet needs. The program, launched 2½ years ago in the hotels' restaurants, originally focused on improving breakfasts for business travelers and hotel guests. But its success has led to its extension not only to lunch and dinner menus in hotel restaurants, but also to meetings and events by hotel catering departments.

“We've really worked at creating menus with balance,” explains Patrick Brennan, general manager of the Detroit Downtown Courtyard by Marriott. While in the past catering breaks for meetings often included a lot of sugary, bread-based snacks, “A typical catering break for us now blends in some other elements,” he says. “People are still conscious about their carbs, but they want options where they can have some — not just a bacon-and-egg diet.” Now, at least one protein selection is included at breaks, whether it's an extensive cheese selection or smoked meats and fish, a concept “which people have embraced wholeheartedly.”

Many of the program's menu items cross over into more than one category. Low-fat dishes such as the yellow lentil and rock shrimp salad and miso-glazed salmon with lemon-grass broth are also low in cholesterol, broadening their appeal to a wider variety of clients, Brennan notes. And adhering to a specific diet doesn't mean giving up favorite flavors: the low-carb prosciutto-wrapped pork tenderloin is served with cauliflower puree instead of mashed potatoes, and heavy cream sauce is replaced with kalamata olive sauce. “It's healthy, and the cauliflower tastes very similar to mashed potatoes — you wouldn't immediately know the difference,” he says.

While caterers are happy to accommodate most special dietary needs, they warn against menus that don't include some variety.

“Sometimes we have to be educators to our clients and say, ‘We can go this far, but if we go all the way — and we'll do it for you, it's your event — you may not be as happy with the results,’” Wharton notes. “If you do a completely vegetarian menu, there's always going to be a couple of people who ask, ‘Where's the beef?’”