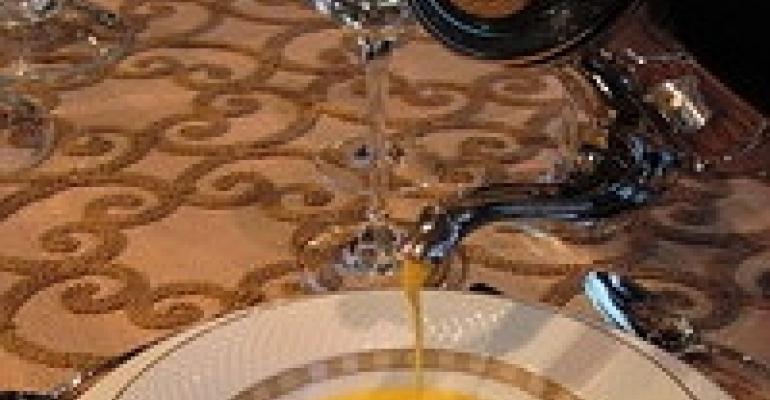 With just a few key ingredients, a clever presentation and a dash of international flavor, caterers create dishes that seem expensive &#8212; even when they're not.

Ready to join the club? Mitchell's Catering & Events (www.mitchellscatering.com) of Raleigh, N.C., makes the small plate even smaller with its “club plates” — diminutive plates or bowls that hold a single appetizer item. “They're different from a small plate, which is used to serve a small tasting portion of an actual entree with a side item,” says managing partner David Casteel. “The small portioned plates give the dish an upscale look — and we are using less food because portioning is completely controlled.” Popular club plate items include pot pies dressed up with a bit of lobster, macaroni and cheese infused with blue cheese or truffle oil, bay scallop ceviche, and caprese salad featuring house-made mozzarella and oven-roasted plum tomatoes in place of expensive heirlooms.

With just a few clever add-ins and a little extra effort in presentation, soup can go from drab to fab. Case in point: Mitchell's transforms simple butternut squash soup into butternut-apple cider bisque served over savory panna cotta studded with bacon, candied pear and blue cheese. “Panna cotta, which is mostly gelatin and flavored cream, is highly cost-effective and easy to produce in large quantities, and the portion is very minimal,” Casteel says. For this dish, the hot soup is poured tableside, melting the panna cotta and its garnitures into the soup for a more complex flavor profile. “This presentation elevates an already good dish into an excellent one,” he says. “We've also incorporated lobster into the recipe for butternut-lobster bisque with apple cider gastrique. Needless to say, the cost of producing this dish is less than half the cost of straight lobster bisque. But by adding lobster to the name, it has luxury written all over it.”

Steak on a burger budget? Of course, says Casteel, who favors hanger steak as a low-cost-yet-high-impact beef option. “It's a relatively flavorful piece of beef with a lot of versatility,” he says, noting that it can be grilled in the spring and summer months but also lends itself well to braising in the fall and winter. “In the winter season, we offer a red wine-braised hanger steak on a roasted corn cake with truffle honey-red wine sauce,” he says. “The menu item sounds luxurious all around, but the reality is that the cost is less than half of what boneless beef short rib would be.”

“Even though multicultural cuisines are prevalent, these foods are still perceived as exotic to most people — and with exotic comes a sense of luxury,” Casteel says. Indian food, he says, is an excellent choice for the budget-conscious, as the dishes are highly flavorful and are built on tastes most people don't eat on a daily basis. An added budgetary (and healthful) benefit: Indian food is largely vegetarian, which reduces the need for pricier proteins.

“Sometimes a dish with simple, inexpensive ingredients can be made posh not by changing the recipe, but by changing the format of how it is traditionally presented,” says Dan Hoch, senior event producer with Philadelphia-based Feastivities (www.feastivities.com). To that end, Feastivities favors “performance carts” — stylish, stainless steel food carts manned by a server — in lieu of the traditional buffet table.

“The server on each cart can perfectly prepare, garnish and present each guest with a small plate, which is far more entertaining than a plop of potatoes from the buffet line,” Hoch says. The cost-effective carts (about $200 to buy) cut down on labor costs, as they are manned by just one person and don't require a food runner. “These carts can be reused and rented to clients over and over again,” Hoch says, adding that the rental cost to the client is offset to the client's advantage since there isn't the usual table or linen rental that accompanies a buffet.

Though comfort food remains a hit with consumers, the dishes needn't be limited to the common classics. Hoch also recommends incorporating comfort foods from around the world for a slightly exotic yet inexpensive spin. Grilled flank steak with chimichurri sauce from South America, English fish and chips wrapped in a newspaper cone, and savory chicken crepes à la Paris made at an action station are best bets that won't break the bank.

HAIL TO THE CHEF!

Get your chef out! Feastivities capitalizes on the public's fascination with all things chef with its “chef bars” — and in the process gets costly pre-event prep work out of the kitchen and in front of the guests. “Chef bars offer the epitome of freshness and bring the excitement of an open-style restaurant kitchen to an off-premise special event,” Hoch says. Pasta is perfectly suited for such preparation: Freshly made pasta dough, hand-cut by the chef behind an elevated bar, is topped with steaming plum tomatoes diced with fresh basil and roasted garlic. “It's an entertaining and delicious finish to an inexpensive plate of pasta,” Hoch says.