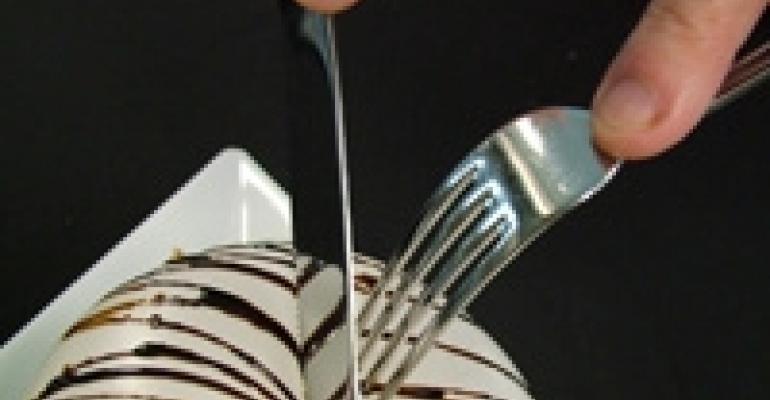 Caterers Play it Both Ways, with Menus Edgy and New Vs. Tried-And-True

Clients say they want cutting-edge cooking—except when they don't. Here, leading caterers show how they play it both ways, offering dishes that are edgy and new, along with favorites that are tried-and-true.

Edgy: As its name might suggest, mozzarella balloon salad pops on the palate--literally. To create it, roasted garlic oil is added to an empty whipped cream canister. A piece of mozzarella, worked into a rubbery consistency, is then placed on the mouth of the canister, and blown into a garlic-infused bubble. Served atop vine-ripened tomatoes and fresh basil, with a drizzle with pesto-balsamic vinaigrette, guest simply pop and enjoy.

Tried-and-True: “Say what you will about Caesar salad, but its broad appeal at large events makes it a menu mainstay that’s here to stay,” says senior event producer Dan Hoch, who suggests front-of-the-house preparation, whether tableside or at stations, and serving the greens in a crisp cup made from asiago cheese, garnished with an edible flower.

Boozed-up ice pops in flavors such as lime daiquiri, white Russian, tequila sunrise and piña colada prove that popsicles aren’t just for kids. And for those less-inclined toward frozen cocktails, there’s always the beer sorbet with pretzel bits.

Edgy: When it comes to edgy and you’re Wolfgang Puck, it’s a bit of a challenge to pick a best representative dish. For starters, there’s the compressed watermelon sangria sphere with micro shiso, or the wild rice popcorn with cilantro. Follow that with a white asparagus salad with pickled watermelon rind, crispy pig skin, fried egg and spring blossoms. And for dessert, could you choose between a strawberry short cake push pop and a brown sugar lemon meringue cone? We didn’t think so.

Tried-and-True: The hands-down favorite--smoked salmon pizza, a fixture at the Oscar Ball. “When I opened the original Spago in 1982, this quickly became its signature pizza,” Puck says. Rounding out the traditional end of the spectrum are mini prime cheese burgers with remoulade and aged cheddar on toasted brioche, and spicy tuna tartare in sesame miso cones.

Edgy: Smoked food—from hors d’oeuvre to desserts—is as ubiquitous as it is delicious. Add the theatrical element of real smoke and you’ve got a cutting edge bite. Case in point: A bourbon smoked scallop with a vanilla buerre blanc served in miniature bell jar. “The coolest thing about this dish is its presentation,” says communications director Stephanie Blackford. “A puff of smoke escapes when the jar is opened.”

Edgy: Any dish that uses a hypodermic syringe in its presentation is, well, unconventional, to say the least. For the aptly named “Purple Haze,” Peruvian purple potato soup is served with a syringe filled with red pepper coulis and finished with a spoonful of pop rocks—all presented on a mirror-like tray.

“We find that edgy events are best complemented by menus that feature a mix of exciting, nouveau cuisine and comfortable, familiar foods,” says president and owner Warren Dietel. The “Study in Heirlooms” salad finds a balance, featuring heirloom tomatoes and a “virtual egg” crafted from mozzarella and yellow heirlooms, sprinkled with flake salt and micro basil, and drizzled with unfiltered olive oil and aged white balsamic with basil foam.

Tried-and-True: Warm and comforting, risotto with sweet corn and rock shrimp is a marriage made in comfort food heaven. Puff ‘n Stuff serves this rich, creamy, oft requested dish from a copper pot with a garnish of diced chives and poached lemon ribbons.

Edgy: It’s a good thing they’re small, because who could choose between a spoonful of white soy caramel sablefish with miso aioli atop cucumber and Asian pear salad with yuzu-mirin vinaigrette, and a Victoria gin-infused, cucumber-wrapped scallop dusted in chili and celery powder? Not us.

The Chill Grill: Also, known as an anti-griddle, and looking much like a traditional flat-top, Occasions uses the Chill Grill to freeze foods on contact. “When sauces, purées, crèmes and foams hit the minus-30 degree top, they set up and freeze almost immediately,” says Mark Michael, who uses it for the company's signature cocktail ice pops.

Catering Equipment on the Edge

Another variation: The Spoon Wall, wherein tasting spoons featuring one bites, such as seared peppered tuna ribbons with daikon and cucumber slaw, and crispy wild rice pancakes with apple-chipotle chutney, are inserted into a customized metal wall (available through www.linenswithpanache.com).

Read the full story in the July-August issue of Special Events, available only to subscribers. Not a subscriber yet? We can fix that; just click here.