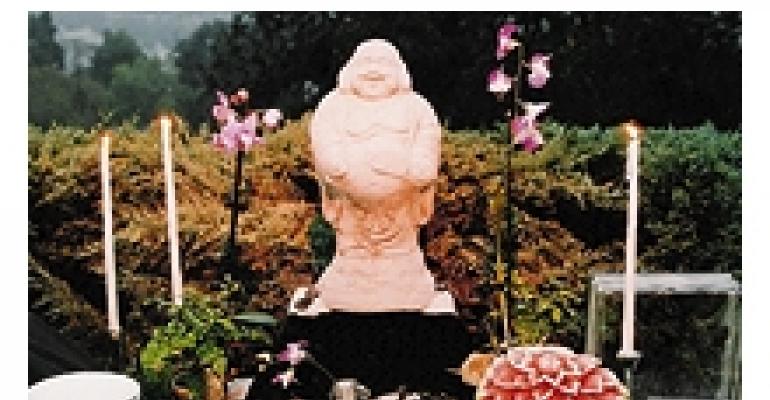 THEY can take inspiration from an event venue, the season of the year or a guest of honor's hobby, but the experts agree: Themed menus aren't just entertaining for event attendees — they're fun for caterers, too.

Marley Majcher, president of Pasadena, Calif.-based The Party Goddess, explains the appeal of themed menus: “Even if a client doesn't request it, we try to tie the menu into the theme because it makes the event much more cohesive,” she says. “The more components that tie in, the more successful the whole event tends to be. I think of running the ‘theme’ thread through all aspects of an event — invitations, decor, menu, beverages, etc. — as the sign of a polished event.”

In June, The Party Goddess team designed an “Asian Fusion” engagement party for 100 guests that did just that. Instead of focusing on only one country's cuisine — “I wanted to have lots of liberty to be really creative and not get tied to just Japanese, for example,” Majcher says — the menu featured fare from Japan, Thailand, China and Korea. The plentiful tray-passed hors d'oeuvre and stations included mushrooms stuffed with ginger shrimp, Thai noodles with garlic and green onions, and salmon dumplings with cucumber relish. Asian beer, Saketinis, green tea, and deep-fried bananas and fresh lychees for dessert completed the culinary tour of Eastern treats. Decor elements such as bamboo, wheat grass, several types of orchids, kumquats, mosses, Buddha sculptures and black rocks enhanced the cuisine.

As for the process behind creating themed menus, “The good points are that it's fun and different — you get to do research, get out of your comfort zone and really learn something,” Majcher says. “Often when I'm doing research for themed events, I end up getting an interesting history lesson in the process.” She adds, “We all have a repertoire of menus with which we're comfortable. It's great to fall back on that repertoire, but sometimes you just want to mix it up and do something totally different.”

One of the best things about creating menus for themed parties, agrees Dan Hoch, event planner at Feastivities Catered Events in Berwyn, Pa., is it gives planners and chefs the chance to showcase their creativity.

“We really get excited about creating themed menus because it often means we get to explore new recipes and less-traditional foods,” he says. “Traditional themes such as ‘Renaissance,’ ‘Hawaiian,’ and ‘country and western’ are alive and well.” However, he notes, “Our chefs have more creative license, and there is much more variety with food presentation when an event has a broader theme like a color or season.”

In February, Feastivities designed a menu for a 60-guest wedding and reception with a 1920s and '30s “Old Hollywood” theme. The event featured a red, gold and black color scheme used throughout the venue, including garnet linen, black and gold china, and gold-etched glassware on tabletops. “For this event, nothing short of a very formal and fabulous seated dinner would do,” Hoch explains. The multi-course menu also reflected the glitziness of the time period. “We did traditional foods from that era, such as Italian wedding soup, chicken française, lobster, filet mignon, tiramisu, and butlered cordials and cigars, which all enhanced this retro-glamorous event,” he says.

Hoch notes that while themed menus inspire creativity, they can also be more costly to produce.

“With many themed menus, there are often elaborate food presentations that will increase the cost of rental linen, china, tables and props,” he explains. “Accordingly, we need to make sure we understand how committed a client is to the theme from a budget standpoint before we get too far into the process.”

Wendy Pashman, president of Chicago-based Entertaining Co., notes, “In the case of an event honoring one specific person, such as a bar mitzvah or birthday, themes work well because we have the opportunity to ‘paint a picture’ of the individual using venue, menu, music and decor.”

Pashman followed this advice for her own 50th birthday party, designed by her longtime friend Tom Kehoe of Kehoe Designs in Chicago. “The event theme was ‘Come as You Are, or as You Would Like to Be,’ which lent a certain whimsical quality to the event,” she says. The extensive menu, created by Entertaining Co. chef Shawn Doolin, took inspiration from Pashman's life and love of traveling. Hors d'oeuvre included an eclectic blend of global items including dolmades, pear and Brie quesadillas, and moo shu Peking duck crepes. A “Jersey Girl Soul” station was a tribute to Pashman's New Jersey roots, serving luckshen kugel, kosher hot dogs, mini bagels and salmon. Her visits to India inspired an “Indian Spice” station that offered vegetable curry, sag paneer and garlic naan bread.

What's the best way to create a themed menu that will impress a client? Ask questions, Pashman says — lots of them. “We ask what the party is for, who is it for, what is the person's or company's personality — sometimes we startle the client by asking these in-depth questions,” she says. “Our goal is to get a ‘flavor’ for the event. We are searching for ways to develop an ambience and personality for [a] particular party and theming an event makes this possible.”

However, she warns, “Themes can be overdone, and it's important to know where the line between clever and cutesy is.”