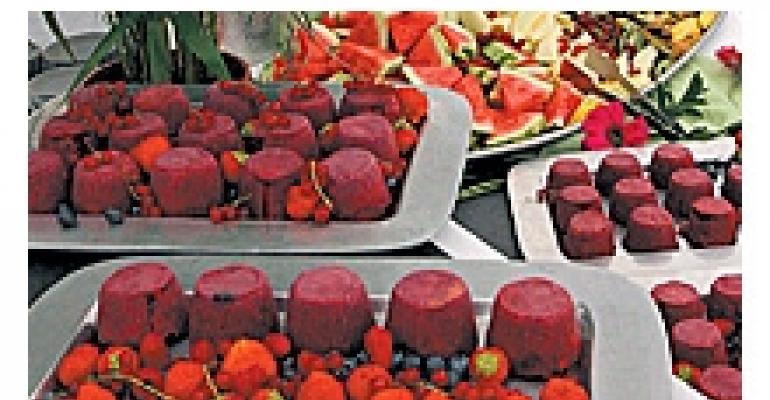 CATERING FESTIVALS IS never a small-scale venture — menus must be able to hold up to large crowds, high heat and, often, less-than-ideal cooking conditions. From handling crowd flow to preserving food quality, three caterers discuss what it takes to create festival-friendly food.

Festivals mean plenty of mouths to feed, so keeping food lines moving is a major priority, notes Steve Baker, owner of Sacramento, Calif.-based Fresh & Quick Catering. Event producer The Lundquist Co. selected his firm to provide catering for the First 5 Sacramento Children's Celebration, held in October to publicize a government agency focused on the health of children under age five.

On event day, 3,000 children and parents showed up to enjoy educational programs and entertainment. Following the presentation, guests headed to the food stations that Baker and his team set up throughout the site. “With so many people being dismissed at the same time, there was a good chance of lines forming,” Baker says. “We tried to set up each station so the flow was really quick — there's nothing worse than standing in a long line waiting for food.” Meetings with the client and site walk-throughs the week before the event ensured that stations were in the best locations to minimize guest wait time.

The stations served such classic festival fare as pizza, hot dogs and snow cones; a grab-and-go station offered healthy, kid-friendly snacks including peanut butter and jelly sandwiches, fruit, popcorn, animal crackers and fruit juices. Due to the event theme and the notoriously finicky eating habits of the young attendees, “It was very important to have healthy food, but also items that appealed to children because this event was all about kids between the ages of 0 and 5,” Baker notes.

For Party in the Park, a large music festival and charity fund-raiser held in London's Hyde Park in July, Watford, England-based Eat to the Beat was one of two caterers backstage, with additional concessionary caterers serving food to the 100,000 music fans in attendance. Eat to the Beat provided catering for the festival's production crew, which numbered 2,000 on the days leading up to the event and 450 on the day of the event. On event day, the company also provided corporate hospitality for 150 guests of sponsor Clear Channel Entertainment and for 1,000 guests of the Prince's Trust, the event's charity headed by Prince Charles.

In addition to its size, the festival's Hyde Park location created other logistical challenges. “The site is in a public park, so careful consideration was taken to ensure minimum disruption was created for the public using other facilities within the park,” explains Tony Laurenson, Eat to the Beat CEO. The company arranged equipment deliveries so they did not block the park's public roads, and delivered large items before the construction of the backstage area, as there was no access after that.

Party in the Park's London location meant supplies were readily on hand, but “festival sites are often out of town, and [plans] have to be made for any last-minute extras and the location of the nearest food suppliers,” Laurenson says. “Numbers will always go up, especially on the day of the [event], so allow for this in your budget and preparation.”

Many festivals use several concessionary catering vendors instead of a single caterer to provide food for larger crowds. Detroit-based Edibles Rex was one of a dozen caterers at the Jazzin' on Jefferson festival, held in June to celebrate the revival of a neighborhood near downtown Detroit. Caterers at the one-day festival “had the choice to do anything, but festival organizers tried to guide the vendors so they weren't duplicating dishes,” notes Edibles Rex owner Tammy Tedesco. Her company offered a “barbecue soul food” menu of barbecue chicken, baked macaroni and cheese, and collard greens with smoked turkey, which fit the festival's low-key musical theme.

The street festival's lack of kitchen facilities meant that the company had to prep many of the menu items in its own kitchen and transport them to the site. “Whenever we do chicken, ribs or any type of protein, we usually bake it off in our kitchen and reheat and barbecue it on site,” Tedesco says. “That's something that we learned over the years, because at something as large as a festival, you get lines, and you don't have time to do a fully cooked product on site.”

Keeping food waiting to be prepared cold poses another challenge at festivals. “A lot of times vendors will get together and ask the festival organizers to provide refrigeration,” Tedesco explains. “Often, [festival organizers] can go to foodservice companies and ask them to donate a refrigerated truck for the weekend.”

When catering an off-site event, “My advice is to over-staff — I think people generally under-staff, and because you're outside and you're not in the realm of your kitchen, it takes longer to do anything,” she notes. “If you have extra staff, you have someone to run and get more ice, get clean water for washing utensils, etc. You just need backup hands.”