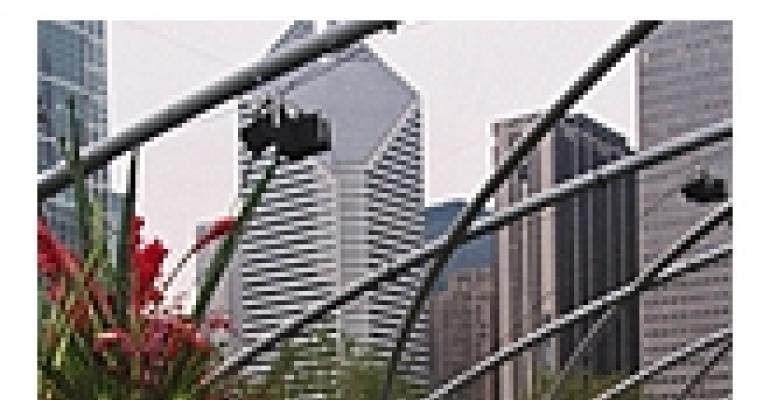 DELICIOUS dishes and superb service are hallmarks of successful events, and it's true for groups of 5,000 as well as 50. Here, three caterers discuss the menu, service and logistical challenges that arise when the guest list numbers in the thousands.

Sarah Finlayson, event and meeting production manager at Chicago-based Blue Plate, notes that for large events, “A good rule of thumb is to serve types of food that can be easily replenished, and easily accessed by the guests.” At an event produced in September by Detroit-based George P. Johnson Co. for Toyota in Chicago's Millennium Park, Blue Plate provided an upscale menu of hors d'oeuvre and action stations for 6,000 guests. A sauté station served a choice of duck confit, harvest-vegetable ratatouille or chanterelle mushrooms over starches such as parsnip puree and polenta. Another station served small plates including sliced flatiron steak atop arugula and fennel salad, while a “shooter and spoon” station offered chilled corn chowder soup shooters paired with barbecue chicken salad served on a Chinese soupspoon.

And while many large events rely on disposable products, “a specific challenge of this event was using real china, flatware and glassware,” Finlayson explains. The company handled the increased workload with a staff of 250 waiters and 100 bartenders to clean up china and glasses; 120 “field chefs” and a 75-person in-house culinary team prepared the event's menu.

For logistical reasons, caterers should carefully consider kitchen locations for large events, including where products will be delivered and the placement of food and buffets. “Mapping everything out on a floor plan and determining flow is critical,” Finlayson says. “A great strategy when dealing with a very large group or space is to divide the space into different areas with separate kitchens, servers and bartenders. By thinking of it as small events within a large event, it will enhance the guest experience by improving service enormously.”

GO WITH THE FLOW

The flow of large events also influences caterers' decisions about what menu items to serve and how to serve them.

When Vancouver, British Columbia-based Major the Gourmet catered an April event for 2,300 guests in a cruise ship terminal, the venue's small entry area created catering challenges. “With guests arriving through a limited access space to the event venue, we had to come up with ways to get everyone in within 45 minutes,” notes owner Nicky Major. To keep guests moving through the tight space, servers greeted them with trays of hors d'oeuvre and limited drink choices of beer, white or red wine, and water. “{The bottles} were all pre-opened and ready to go — it got guests moving, and they didn't have to wait,” Major explains.

Once inside, guests moved through five themed areas, each representing a region of Canada and serving menu items based on indigenous ingredients. In the first three areas, guests sampled hot dishes such as cedar-planked salmon, venison loin and buffalo burgers. The “Bloom Bloom” room highlighted Vancouver's British heritage with tea sandwiches and Pimm's cocktails, while the wintry “Frostbite” room served cool items such as sake-spiked gazpacho with ahi tuna and baked Alaska desserts. Dishes were prepared on site by more than 48 chefs, 12 of whom worked in a kitchen set up at the venue specifically for the event while the rest oversaw action stations in the themed areas.

As for deciding how much food is necessary, “This is often the hardest area to address,” Major notes. It's not only the number but also the type of guests that helps determine quantities. For this event, “80 percent of the guests were men, so we knew the protein part would be key,” Major explains. She estimated a total of 10 ounces of protein per person, divided between menu items and adjusted based upon which dishes she thought would be most popular. She calculated for five bite-sized hors d'oeuvre pieces per guest in the “Bloom Bloom” room, “which was right on,” and 1½ ounces of salad items per person. Cooking dishes on site helped eliminate waste while preventing the team from running out of food: “We had backup on some items that we did not cook until required,” Major explains. “Creating a kitchen on site allowed this, so the 10 percent extra food we took was not required, {and therefore} was not wasted.”

Susan Bleemer, executive chef and owner of Miami-based Catering the Event, says that for parties with thousands of guests, stations and buffets are the best service styles. In addition to encouraging mingling, they give hungry guests access to food right away. “When people arrive at large parties, they want to eat immediately,” she notes.

For the 25th anniversary party of pharmaceutical company Pharmed Group in December, long tapas tables greeted the 4,000 employees, allowing them to serve themselves as soon as they arrived. Eleven large buffet stations placed throughout the venue offered both hot and cold Latin-influenced menu items, while chef-manned action stations provided food and entertainment. At a seafood paella station, chefs cooked up batches of paella as guests watched, but because of the size of the crowd, Catering the Event prepared six large batches — enough to fill 30 steam table pans — of paella before the event. “It's so important to have some food ready ahead of time,” Bleemer says, “because you can't have people spending the entire party in line waiting for things to cook — that's just not fun.”

And as far as drink service goes, for large groups, “I like a huge, long bar where guests can go and get a drink with no wait,” she says. “If you have a party where no one waits for a drink, that's a success.” For the Pharmed event, each bar had 12 bartenders, all with experience working at stadiums and other high-volume venues. “These are guys that know how to make drinks fast,” Bleemer explains, “and because of the way the bars were set up, there was so much room that {the bartenders} could serve three people at a time.”