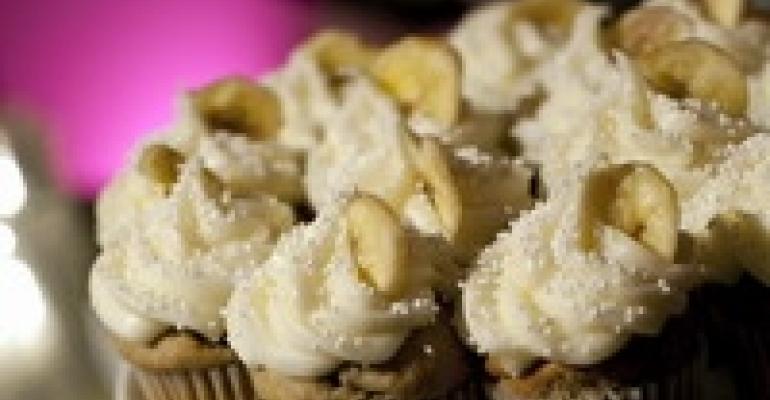 EVERY MENU TELLS STORY: Savvy brides want their guests to know not only what they are eating, but in many cases, what it's made of and where it's from. “Thanks to the Food Network and other cooking channels, most brides and grooms fancy themselves as chefs,” says event coordinator Anna Spraungel. “They want to be intimately involved with the food — from the ingredients to the way it's prepared to its detailed presentation on their menus.” More often than not, Spraungel is asked to include the food's lineage on the printed menus — everything from the farms that the produce comes from to the ranch where the organic beef was raised.

PALM FRITES: Small, hand-held bites with big flavor remain popular accompaniments to the cocktail hour. “We do French fries in little cones, mini grilled Reuben sandwiches and hand-held salads that are eaten with fingers as hors d'oeuvre,” Spraungel says. As for dessert, everyone's favorite portable treat — the cupcake — is still very much in demand, and is an inexpensive alternative to a traditional wedding cake, she says.

POSH PIZZA: When done well, pizza can be both impressive and inexpensive. “Luxury pizzas and pizzettas are still very popular,” Rankin says, noting that unusual toppings (potato and chorizo) and sweet-savory flavor combinations (Parma prosciutto and gorgonzola drizzled with chestnut honey and rosemary) elevate pizza from pie to perfection. “We also try to use local, artisanal products — such as cheese — made in the area where the wedding takes place,” she says, “which adds a memorable and delicious detail.”

TRAY CHIC: “More and more brides are using trays from home,” Rankin says, noting that the personal touch is paramount when it comes to what the food is served on. “I recently had a bride who asked each of her friends to bring a red serving tray to use at the reception. In the end, she had an eclectic collection of unique yet coordinating pieces that were really significant to her.”

CHEERS TO BEER! The popularity of the gastropub has not been lost on caterers, especially at weddings. “Let's get guests involved during the cocktail hour,” says sales consultant Devon Brennan. “Beer is so huge right now — why not take the opportunity to teach people about it?” To that end, Blue Plate has added lagers, pilsners, ales, stouts and even barley wines to its wine and cheese pairing station menus, offering guests a whole new way to experience — and appreciate — a good bottle of brew.

FLAVORFUL INFUSIONS: Everything's better with bacon — even booze! Blue Plate's bacon-infused bourbon is a huge hit, especially with male wedding guests. “Guys like bacon and guys like whiskey,” says Brennan. “Why not combine them?”

FILET A NEW WAY: The standard choice of chicken or beef as a plated protein is fast becoming a menu relic. Instead, Blue Plate offers assorted passed “petite filet” entrees such as small filets of striped sea bass or jumbo sea scallops presented tableside. “This is less wasteful then serving a huge plate of protein,” Brennan says. “And the guest has the option of taking or passing. It's similar to French-style service without the fancy cart.”

Bride on a Budget:

TIPS ON HOW TO KEEP TASTE UP AND COSTS DOWN